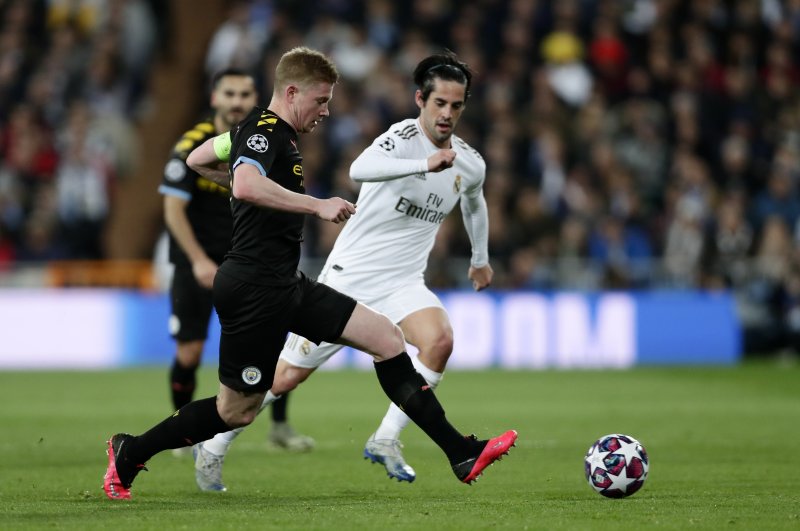 Manchester City's Kevin De Bruyne, left, duels for the ball with Real Madrid's Isco during the Champions League, round of 16, first leg soccer match between Real Madrid and Manchester City at the Santiago Bernabeu stadium in Madrid, Spain, Feb. 26, 2020. (AP Photo)
by Adil-Girey Ablyatifov Feb 27, 2020 11:10 am

Despite monthslong speculation, UEFA’s two-year ban on Manchester City has sent shockwaves through the world of football.

The ban, imposed over City’s financial irregularities, leaves the most prestigious club competition in the world, the Champions League, without one of the most exciting teams. More than a dozen elite players would be omitted from the competition too.

UEFA’s position is obvious — it is trying to send a clear message to European powerhouses that Financial Fair Play rules are not to be breached. Several clubs have received punishments over finances, but none were this severe. In a way, this is a public execution.

The decision is also in line with UEFA’s recent push to close the gap between the rich and the poor of European football. UEFA has made several reforms to that end, including changing the Champions League qualifying system, efforts to make the Europa League more appealing and the introduction of the Europa Conference League, the third-tier European club competition.

Consulting firm Deloitte said in 2018-19 the world’s 20 wealthiest clubs made a total revenue of $10.1 billion throughout the season — the highest combined revenue on record. The figure surged 12% year-on-year.

Any UEFA regulations, including the FFP, would be unable to stop this growth.

While trying to “help” smaller European clubs, UEFA may be alienating the continent’s powerhouses.

The City ban comes amid talk of a future closed-shop European Super League and breakaway cross-border divisions, as some clubs seem ready to chase bigger commercial deals by moving beyond the bounds of national leagues. UEFA and FIFA are dismissive, but the current state of football shows that the Super League is not only a crazy idea of the rich. The inflation in the transfer market has reached astronomical levels, and it is unlikely to stop. Soon the FFP regulations and other UEFA interventions may become too tight for most top clubs, hindering their development. Europe’s top clubs may be compelled to accelerate their talks on the new supranational league.

The super league — in spite of how sinister it may sound — could solve several problems in European football.

One, it would replace the Champions League with a lot more exciting competition. The current Champions League format has been in place since 2003. The tournament needs reform and fresh life, but UEFA is unlikely to grant Europe’s top clubs what they want. Despite the drama and occasional sensations, the competition has become predictable — and it has been for a while.

The super league, however, would give football fans several super matches every weekend. This factor would attract hundreds of millions of viewers. At the start of every season, at least a dozen teams would be favorites to win, putting the competition’s unpredictability at a whole other level.

The super league would also mean that top teams and players only play each other. From a sporting point of view, there is hardly anything better for professional development. Such ridiculously tough competition would push football forward exponentially.

Players would have to put up a top performance every week since there are no easy matches, while managers would have to always be ready to develop new systems and approaches. To be the best, you have to beat the best.

One of the main opposing arguments to the super league is that it would kill national leagues. But four of Europe’s five top leagues have had problems with competition for years. In Germany and Italy, Bayern Munich and Juventus have won eight of the last 10 league titles. Barcelona has taken seven Spanish crowns, and Paris Saint-Germain has been the champion six times in the last 10 years. All these leagues are clearly dominated by one — at most two — teams. Taking these powerhouses out of the league may even out the competition and actually facilitate the development of all other clubs.

Meanwhile, FIFA is trying to prevent the formation of the super league by revamping the unnecessary Club World Cup. The competition has long been seen as an unneeded distraction in the middle of the European season. European football is so far ahead of everyone else that holding a tournament among continental champions is redundant. Champions League winners are the world’s strongest clubs. They have won nine titles in the last 10 years.

The revamped Club World Cup is due to be staged every four years, replacing the current annual format. Neither clubs nor players are happy about it. The football schedule is packed as it is. Elite players have short summer breaks and partially miss crucial preseason training at least twice every four years due to the World Cup and continental national tournaments. The new Club World Cup would see players have three busy summers in four years. Breaking away from FIFA and creating the super league will solve this problem altogether.

The establishment of the super league would also mean top teams do not participate in cup competitions, which have lost their prestige and importance across Europe. This will further unload the players’ schedules.

Europe’s best teams have grown significantly both on and off the pitch and united they can easily put up a fight against UEFA and FIFA if they threaten them with punishment.

The gap between top clubs and others has grown too wide. Making them all play in the same competitions is unfair to both. Heavyweights should have their own category.

The super league is only a natural next stage in the development of the world’s most loved sport in the era of globalization.