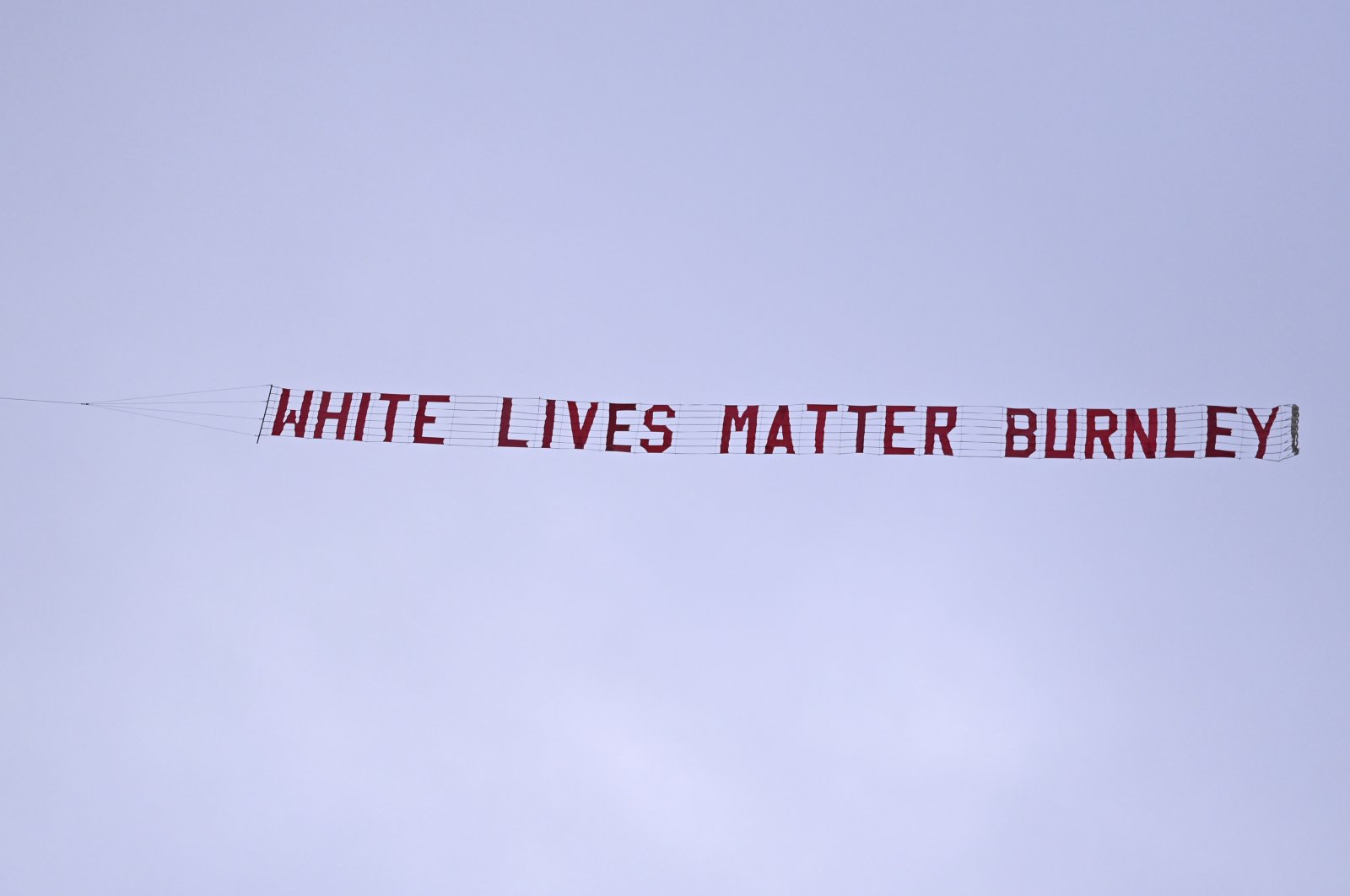 The aircraft came into view moments after players and coaches from Manchester City and Burnley took a knee at kickoff on Monday in support of the Black Lives Matter movement. It circled City’s Etihad Stadium for several minutes.

The identity of those responsible for the stunt was unclear but British media reported the plane was operated by a firm called Air Ads, which is based at Blackpool Airport in northern England – about 40 miles (64 kilometers) from Burnley. The airport announced it was suspending banner-towing operations with immediate effect, saying it was “outraged” by the incident.

“We will then be in a position to make an assessment as to whether any criminal offenses have taken place,” he said.

Burnley’s captain, Ben Mee and the club were quick to condemn those responsible for the banner and said they were fully behind the Black Lives Matter movement that has gained popularity worldwide since the killing of George Floyd in the United States last month.

In a fresh statement published Tuesday, Burnley underlined that its overarching and prevailing club mantra is that Burnley is “One Club for All.”

“While we naturally consider that all lives matter, let us be clear that the Black Lives Matter movement aims to overcome years of racial inequality against the BAME (black, Asian and minority ethnic) and promote greater fairness for all,” the club said. “We at Burnley, therefore, stand firmly behind it and oppose anything that may appear to undermine or challenge such a positive message.”

Burnley reiterated its intention to hand lifetime bans to those responsible for the stunt.

Anti-discrimination group Kick It Out stressed that the purpose of the Black Lives Matter movement was not to “diminish the importance of other people’s lives.”

“It is to address an imbalance and highlight that Black people are being denied certain human rights simply by virtue of the color of their skin,” Kick It Out said. “It is about equality. We shall continue to support the Black Lives Matter movement and the fight for greater equality in football.”

A lawmaker from Burnley said the perpetrators “don’t speak for our town.”

“Last night’s awful stunt was done by a small minority to offend and cause hurt to so many in our community,” Antony Higginbotham said. “Those responsible should be ashamed of their desire to divide.”

The incident comes at a time when the Premier League and its clubs are throwing their weight behind anti-racism campaigning.

When the league season resumed last week after the coronavirus outbreak, “Black Lives Matter” replaced player names on the backs of shirts. Players, coaches and match officials have taken a knee for around 10 seconds before kickoff in the first 12 matches of the resumption.

They did so again before Leicester vs. Brighton on Tuesday, which began the second full round of matches after the restart.

Iffy Onuora, equality officer for English football’s players’ union, said he hoped the widespread condemnation of the banner will act as a catalyst for further conversations about the Black Lives Matter movement.

“The words themselves aren’t offensive, it’s just the context. It’s the rejection of the conversation we’re having at the moment. That’s what it represents,” Onoura told the BBC. “I guess people have the right to do it. For me, it’s just proof again that these things can lead to positive things because all that’s been said in the 12 hours since the game finished has been, again, a catalyst, another conversation to have.”

Onoura said the English game was at a “transformative point” in the fight against racism.

“For everyone out there, these are uncomfortable conversations and we’ve got to have them,” he said. “There’s nothing wrong with doing that, being comfortable with being uncomfortable.”