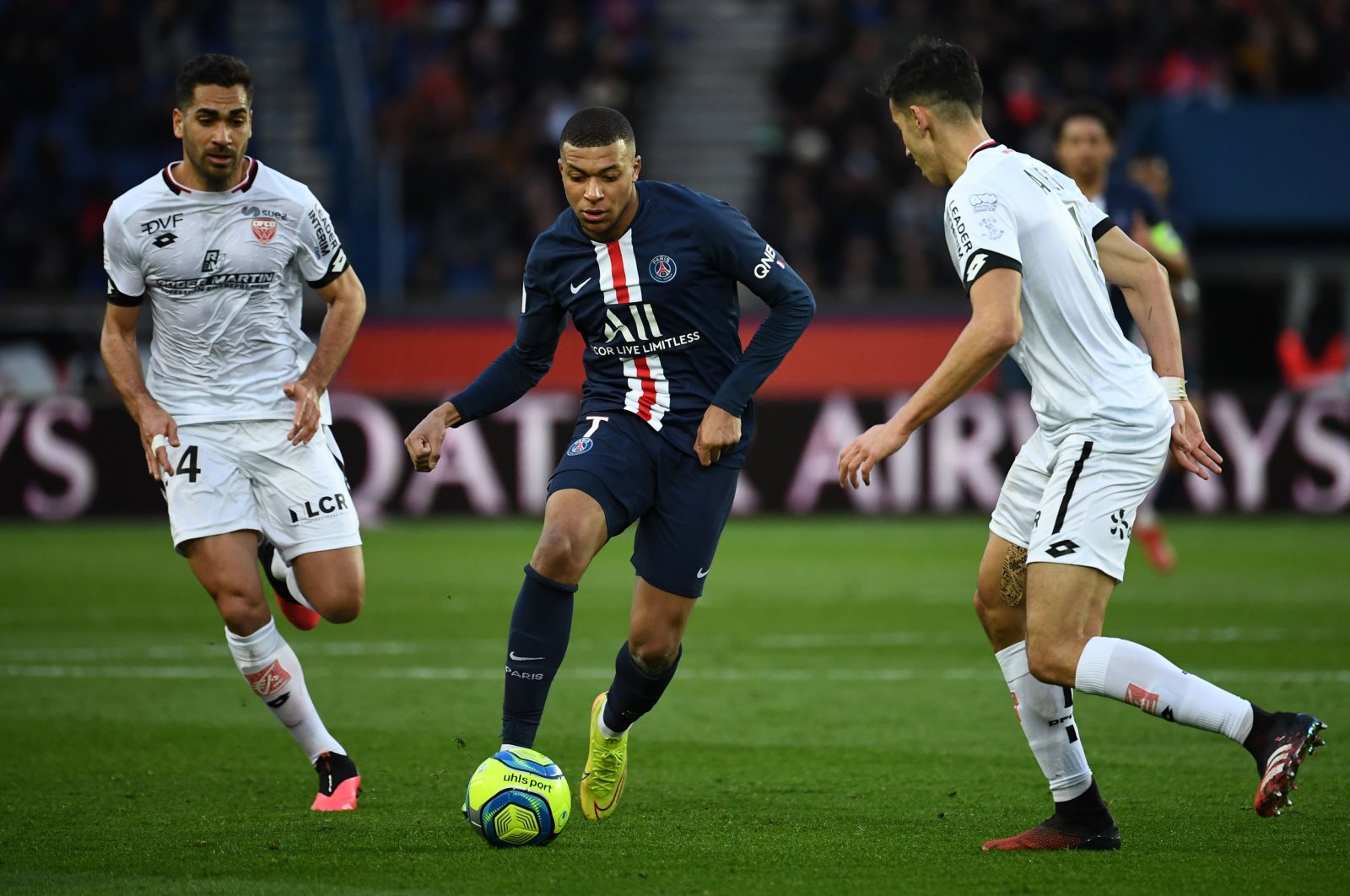 Kylian Mbappe (C) signed with Paris Saint Germain for a record 120 million euros ($129 million) shortly after his stellar performance during the 2018 World Cup in Russia. (AFP Photo)
by Compiled from Wire Services Mar 22, 2020 11:53 am

With football leagues around the world suspended indefinitely due to the coronavirus pandemic, the transfer market is riddled with uncertainty as everyone involved tries to figure out what to do during these unprecedented times

With football having ground to a halt because of the coronavirus pandemic, the usual transfer rumor mill has fallen silent and nobody cares much where Neymar or Paul Pogba might be playing next season.

Nobody even knows when next season might be or the financial impact on football clubs, and therefore the transfer market, is likely to be significant.

A study by KPMG this week estimated that canceling the rest of this season would cost clubs across Europe's top five leagues as much as 4 billion euros ($4.33 billion) in lost revenue.

The unintended effect could be enormous, trickling down to smaller clubs worldwide.

For example, the French side Monaco raked in huge sums in recent years from selling players like Kylian Mbappe, who went to Paris Saint-Germain in 2018 for 180 million euros. It has then invested that money in new recruits, helping spread the wealth.

"Given the international situation, clubs are going to be less inclined to pay the kind of sums we look for," admitted Monaco vice president, Oleg Petrov.

Nevertheless, beyond worrying about who Mbappe, Neymar or Pogba could sign for, there is a more pressing concern.

What about players out of contract?

UEFA's commitment to ending the European season by June 30 was surely partly because it is common practice for contracts to run until that date.

Players like Manchester City's David Silva, Willian at Chelsea, or Paris Saint-Germain's Thiago Silva and Edinson Cavani, will be free to leave on July 1 even if the season has not been completed.

FIFA has set up a working group that could amend rules on transfers and make changes to "protect contracts for both players and clubs."

However, clubs are already having to take drastic action to stave off financial disaster.

Some French sides, including Lyon, put their players on short-time working as a means of saving money. Swiss outfit Sion canceled the contracts of nine players who refused to go on temporary unemployment.

In Scotland, it is not unusual for player contracts to expire immediately after the scheduled last game of the season in May. In any case, struggling Hearts has asked players and staff to accept 50% pay cuts.

Meanwhile, young players who are out of contract are a problem, pointed out David Venditelli, a French agent whose company Score represents Arsenal's Alexandre Lacazette among others.

"Things are on hold for these players who are in a precarious position. They are the ones who are the most in danger," he said.

More free agents might find themselves on the market, but the biggest Champions League stars are unlikely to be impacted.

Super-agents will keep playing the game, like Mino Raiola, whose clients include Pogba and Borussia Dortmund's Erling Braut Haaland.

Raiola told Spanish sports daily Marca this week that he hoped "to one day transfer a massive player to Real Madrid" and would "try to do it this summer".

Elsewhere, the dynamics of the market may change. "In some ways, people will be eyeing up bargains," said one agent with in-depth knowledge of the British market. "A distressed club becomes a motivated seller, so there will be a fire sale of a distressed club selling its assets."

However, the reality is that nothing is happening right now.

"Nobody wants to get involved in that sort of thing now. Our primary job at the moment is to make sure all our staff are looked after," said Jonathan Barnett, whose clients include Gareth Bale.

"We all have the same problems, with uncertainty and things. We're not thinking about the summer or transfers because we don't know how far this thing is going to go."