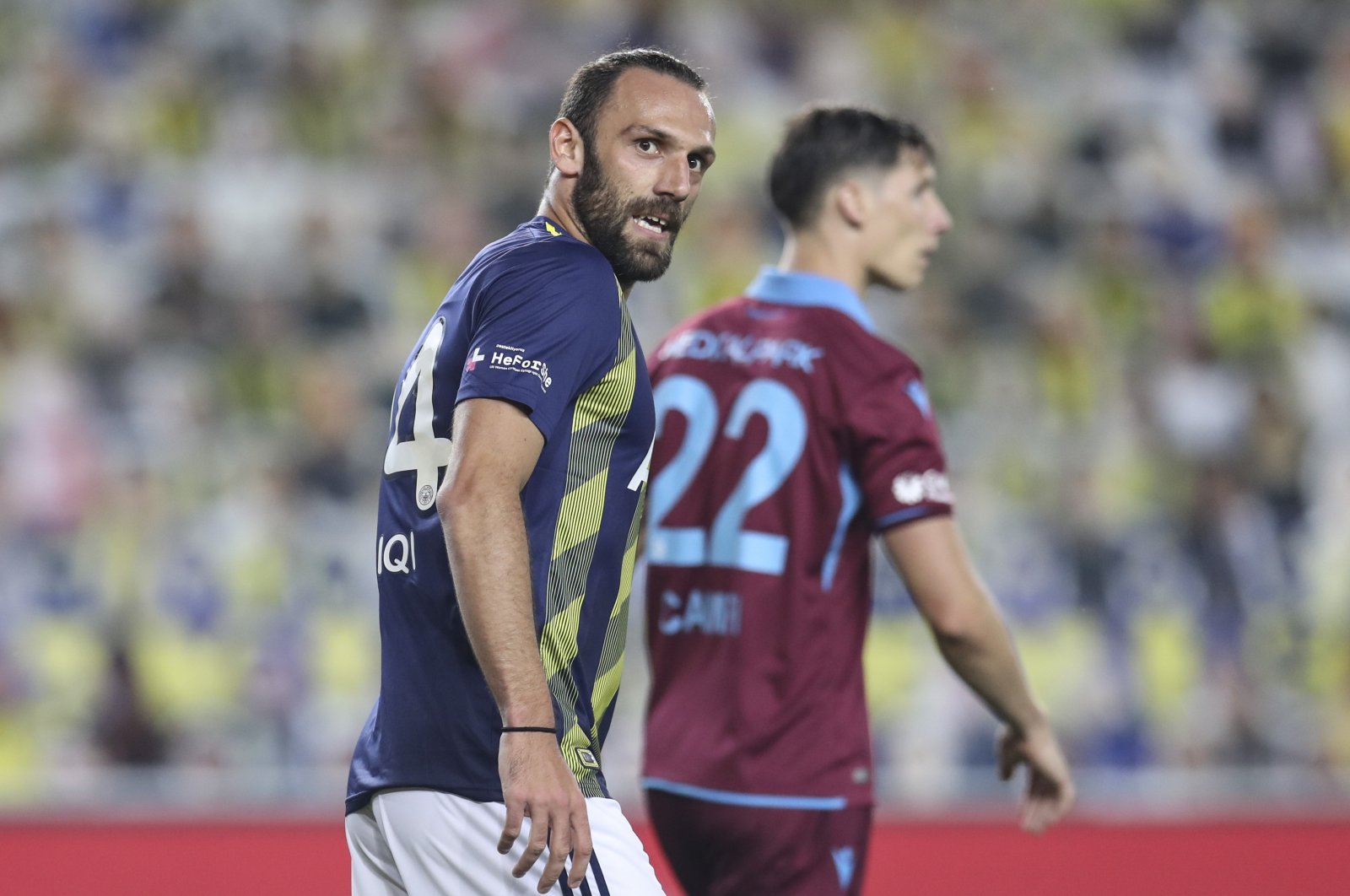 Former Fenerbahçe player Vedat Muriqi became the most expensive outward transfer in the Süper Lig after his move to Serie A side Lazio. (AA Photo)
by Daily Sabah with Agencies Oct 06, 2020 2:50 pm

Football clubs across the world went into a spending frenzy during the summer transfer window, ignoring the ongoing coronavirus outbreak that unleashed unprecedented economic troubles in sport

Just a few months ago many football clubs in Europe were reporting severe financial losses due to COVID-19 outbreak, with the sport’s ruling bodies UEFA and FIFA warning of unprecedented dangers.

But as soon as the summer transfer window opened, the doom and gloom of the outbreak left its place to flashy big-name signings.

And as closing hour of the transfer window drew closer on Monday night, major European clubs went on a shopping frenzy that saw millions of euros and star players change sides.

With so many last-minute transfers, here is a look at how some clubs in major leagues fared during the summer transfer window.

Compared with other major European leagues, Turkey’s top-flight Süper Lig saw humble signings, if not straight-out free transfers. While Turkish clubs were financially affected by the outbreak as much as their European rivals, the Turkish lira’s crisis exacerbated their woes.

For Süper Lig, the club that had the most transfer activity was without a doubt Istanbul powerhouse Fenerbahçe.

The Yellow Canaries almost completely revamped its roster during the window, signing 18 new players and parted ways with 15 others, as well as appointing a new manager, Erol Bulut, prior to the season’s start.

Eleven of the Fenerbahçe’s new arrivals are foreign players, while seven of them are Turkish.

Opting mostly for free transfers due to spending limits placed on clubs by the Turkish Football Federation (TFF), Fenerbahçe surprisingly spent less than 9 million euros ($10 million) on transfer fees. The Istanbul side spent most of it on center back Marcel Tisserand, who arrived from Germany’s Wolfsburg for 4 million euros.

The highlight of the transfer season for Fenerbahçe, however, was the sale of Vedat Muriqi. The Istanbul side managed to convince Serie A side, Lazio, to pay 17.5 million euros for the Kosovan striker.

Fenerbahçe’s archrival Galatasaray, meanwhile, parted ways with more players than it welcomed aboard.

The Lions saw seven new arrivals and 12 departures after the transfer window.

Following a thriftier approach to the transfers, Galatasaray only paid a transfer fee for one of its signings – 675,000 euros for midfielder Oghenekaro Etebo’s loan from Stoke City.

The Lions, however, did not make much profit from sales either, making less than 2 million euros from sales of center back Maicon Pereira Roque and right-winger Jimmy Durmaz.

The highlight of the window for Galatasaray was the highly divisive transfer of former player Arda Turan.

While many fans were warm to Turan’s homecoming from Barcelona on a free transfer, others voiced concern over his personality, pointing to the numerous troubles the left-winger stirred in his career.

Beşiktaş, the remaining of Istanbul’s Big Three, spent less than a million euros for 10 players it welcomed. The Black Eagles, however, did not manage to finalize any sales.

The marquee transfer of the season was the signing of Cameroonian forward Vincent Aboubakar, who arrived from Porto on a free transfer.

The Black Eagles also managed to bring Josef de Souza on board, who played for Beşiktaş’s Istanbul rival Fenerbahçe for three years before departing for Saudi Arabia’s Ahli in 2019.

After the transfers, Başakşehir became the Turkish club with the most valuable squad with a total worth of 88.95 million euros, according to Transfermarkt, a website that tracks the transfer values of players.

The last hours of the transfer window were quite busy in England as Manchester United and Arsenal made the biggest headlines on deadline day with deals for Edinson Cavani and Thomas Partey respectively, but Chelsea ultimately became the biggest spender of the summer.

Whether Lampard will be able to gel those new signings into a cohesive unit is the question that will define Chelsea's season as a success or failure.

Frustrated by the defensive deficiencies that ruined City's bid for a third successive title last season, Pep Guardiola spent over 110 million euros on a pair of center backs.

Nathan Ake was signed from Bournemouth for 45 million euros, but after the Dutch international was part of a back four that conceded five goals at home to Leicester, Guardiola decided to double down on the position with a 67 million-euro move from Benfica's Ruben Dias.

Dias is regarded as a natural leader and will need to live up to that billing as City has appeared bereft of organization and fight since Vincent Kompany's departure to Anderlecht last year.

Ferran Torres's 22 million-euro arrival from Valencia seemed an extravagance given City's wealth of options on the flanks.

Lurching from one bungled deal to another, United endured a troubled transfer window that added to boss Ole Gunnar Solskjaer's problems on the pitch.

United's third-place finish last season raised hopes of a big leap forward fueled by a host of star signings, but instead, they became embroiled in a protracted and ultimately unsuccessful pursuit of Borussia Dortmund forward Jadon Sancho.

Porto left-back Alex Telles also arrived on Monday for 14.8 million euros, but neither he nor Ajax midfielder Donny van de Beek, who joined for 44 million euros in the close-season, is likely to set pulses racing.

Among the Spanish top clubs, only Sevilla seemed to walk away from the market reinforced.

At Valencia, such was the disappointment with no new arrivals that Spanish radio Cadena Ser reported on Monday night that coach Javi Gracia could quit.

It was fitting that Barcelona announced losses of 97 million euros for last season on Monday as their market activity reflected that financial fragility.

The Catalan club got Brazilian midfielder Rafinha off the wage bill with a transfer to PSG, which will initially be for free but could end up generating 3 million euros.

Barca also loaned defender Jean-Clair Todibo to Benfica for a 2 million-euro fee. But the theory that moving one center back out might allow them to sign Garcia from City proved to be erroneous.

Greater gains were made in terms of a reduced wage bill with big earners Luis Suarez, Arturo Vidal, Ivan Rakitic and Rafinha all leaving.

Having spent nothing, Real Madrid sold players to the value of 89 million euros with Sergio Reguilon's move to Tottenham and Achraf Hakimi's switch to Inter alone bringing in 70 million euros.

The transfer market cannot simply be judged by the cost of fees though. Real Sociedad was one of the happiest clubs of the window having brought legendary attacking midfielder David Silva in from Manchester City on a free transfer.

If Bayern Munich was quiet early in the transfer window, that was not the case on deadline day when the club signed four players in the last 24 hours available for new signings.

The last-gasp sprint started on Sunday when they signed defensive midfielder Marc Roca from Espanyol, and he was followed by striker Eric Maxim Choupo-Moting, winger Douglas Costa and full-back Bouna Sarr on deadline day.

In contrast, current Bundesliga leader RB Leipzig made only one move on the final day of the window while Borussia Dortmund did not add to their squad at all with their business done earlier.