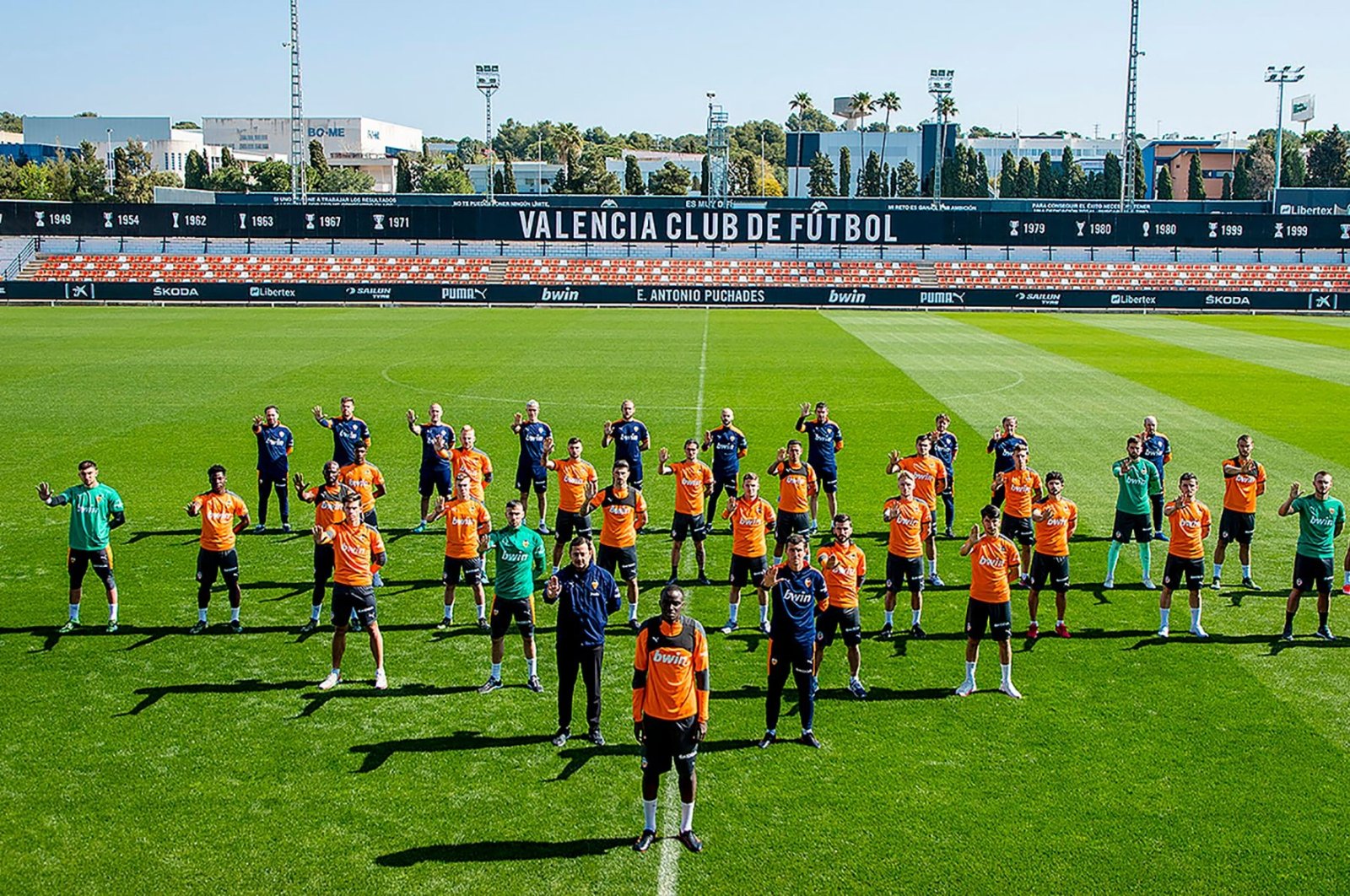 La Liga side Valencia backed Mouctar Diakhaby with a training ground demonstration on Monday after the club said the defender was racially abused during Sunday's La Liga game against Cadiz.

Valencia's players walked off during the first half in protest but later resumed, with the club claiming it was told it would be punished if it refused to return.

Diakhaby had been involved in a heated exchange with Cadiz's Juan Cala before the Frenchman left the field and the fixture was stopped.

Referee David Medie wrote in his match report Diakhaby told him that Cala called him a "negro de mierda," meaning a "sh**ty black."

Medie wrote the insult had "not been picked up by any of the refereeing team."

Cadiz coach Alvaro Cervera said after the game that Cala insisted he had not racially insulted Diakhaby.

Valencia released a video on Monday afternoon of the club's players and staff standing behind Diakhaby on the club's training pitch.

Everyone pictured is making a stop signal with their hand while there is also footage of Diakhaby speaking to coach Javi Gracia and being hugged by teammates.

"Today, tomorrow, always, stop racism," the post read. "We'll fight until the end to clarify what happened, defend our player and eradicate racism!"

Valencia released a statement on Sunday night saying Diakhaby had been "the latest victim of racism in football".

It also said the club had not asked the players to play on.

"The referee informed the players of the consequences of not going back out onto the field of play," the statement continued.

"The players, forced to play under threat of penalty after the racist insults and the yellow card to Diakhaby, decided to return to the pitch."

Leading sports daily Marca's front page on Monday carried a black background behind a photo of Diakhaby sitting in the stands, with the headline "You are not alone."

Valencia might have refused to resume the game but the club maintains they had no choice but to return.

"In the changing rooms we were told if we didn't return, we would be sanctioned," said Gracia after the match.

"In that moment, we spoke with Diakha, about how he was, and he told us that he wouldn't play but he understood perfectly we had to continue playing to avoid a possible sanction, so we returned."

Valencia defender Jose Gaya also told Spanish television afterward: "He told us he was insulted in a racist way. We went back out to play because they told us they could penalize us with three points and something more. He asked us to go back, he's gutted, it was a very ugly insult."

Cala told reporters outside Cadiz's training ground on Monday morning he would hold a press conference on Tuesday "to explain everything".

"I'm not going to hide," he said. "It seems like the presumption you are innocent before proven guilty doesn't exist in this country."

Cala did not speak to the media or post on social media after the game, although his coach Cervera said the defender had told him he had not insulted Diakhaby.

"We returned to the changing room, we talked," Cadiz coach Cervera said. "Cala said that at no time did he insult the player. I believe in my player."

Cadiz said they opposed racism and xenophobia "regardless of who the perpetrator is", adding that "anyone who commits these acts should pay for them, even if they play for our team".

Neither La Liga nor the Spanish soccer federation has announced whether Cala is being investigated.

"We take any allegation of racism seriously and will work with the clubs and refereeing establishment to do whatever is necessary to protect the values of equality and respect that prevail in our Spanish professional football competition," La Liga said on Monday.

"La Liga condemns racism in all shapes and forms and has been an active party in persecuting hate crimes in Spain."