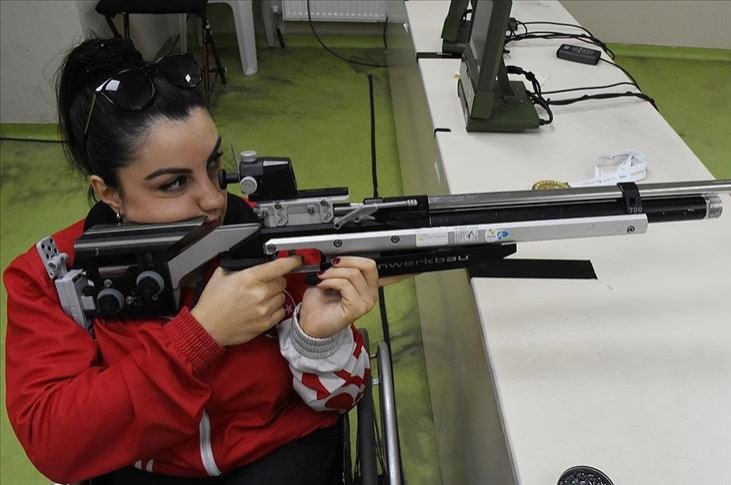 Turkish paralympic shooter Çağla Atakal, who earned a spot in the Tokyo Games, said a teammate's gun helped her to the No. 1 ranking at an Olympic qualifying event. The 27-year-old won a gold medal for her memorable performance at the 2019 World Para Athletics Championships in Dubai, United Arab Emirates.

Atakal told Anadolu Agency (AA) everything was fine until she broke her gun during training camp, one day before the Olympic qualifying event. "It was the worst experience of my life. I had been working toward this event for months, and I braced myself for qualifying, but in the meantime, my (teammate) offered me her gun to use, and I placed through her," she said. That single act of kindness will never be forgotten, she added. "I understood the importance of friendship, being an ally to campaign for the same country, and I am happy to raise our flag to the highest with her help." Atakal continued, "I ranked No. 1 at the competitions, and I am now eligible for the 2020 Paralympics."

Atakal, who also qualified to represent Turkey at the 2016 Summer Paralympics in Rio de Janeiro, stressed that although her achievement did not attract as much attention as a football match in Turkey, she received positive comments from her inner circle and followers on social media. She said she would try to maximize her four-year effort in Tokyo so she can fill Turkey with pride by winning a gold medal.

Atakal also realizes the importance of mental health alongside a hard training schedule.

"I don't do heavy training one day before my competition," she said. "I prefer to have a mental toughness training program instead, and I always listen to soul-soothing music."

The Paralympian said it is important to have strong mental health, stay within yourself and salve the soul. She added, "Calming down, focusing on the target and being patient is highly important." Atakal stressed that hard work is the essential element to achieve anything and tells those who want to be a successful athlete that they should not give up on their dreams. "Concentration must be at a high level when they are at a shooting range," she said. "I sincerely say that I do shotgun sports to be a good example. The guns must be used only as a sports activity." She added that the shotgun requires calmness, which is why one cannot be successful in this sport without coolness.