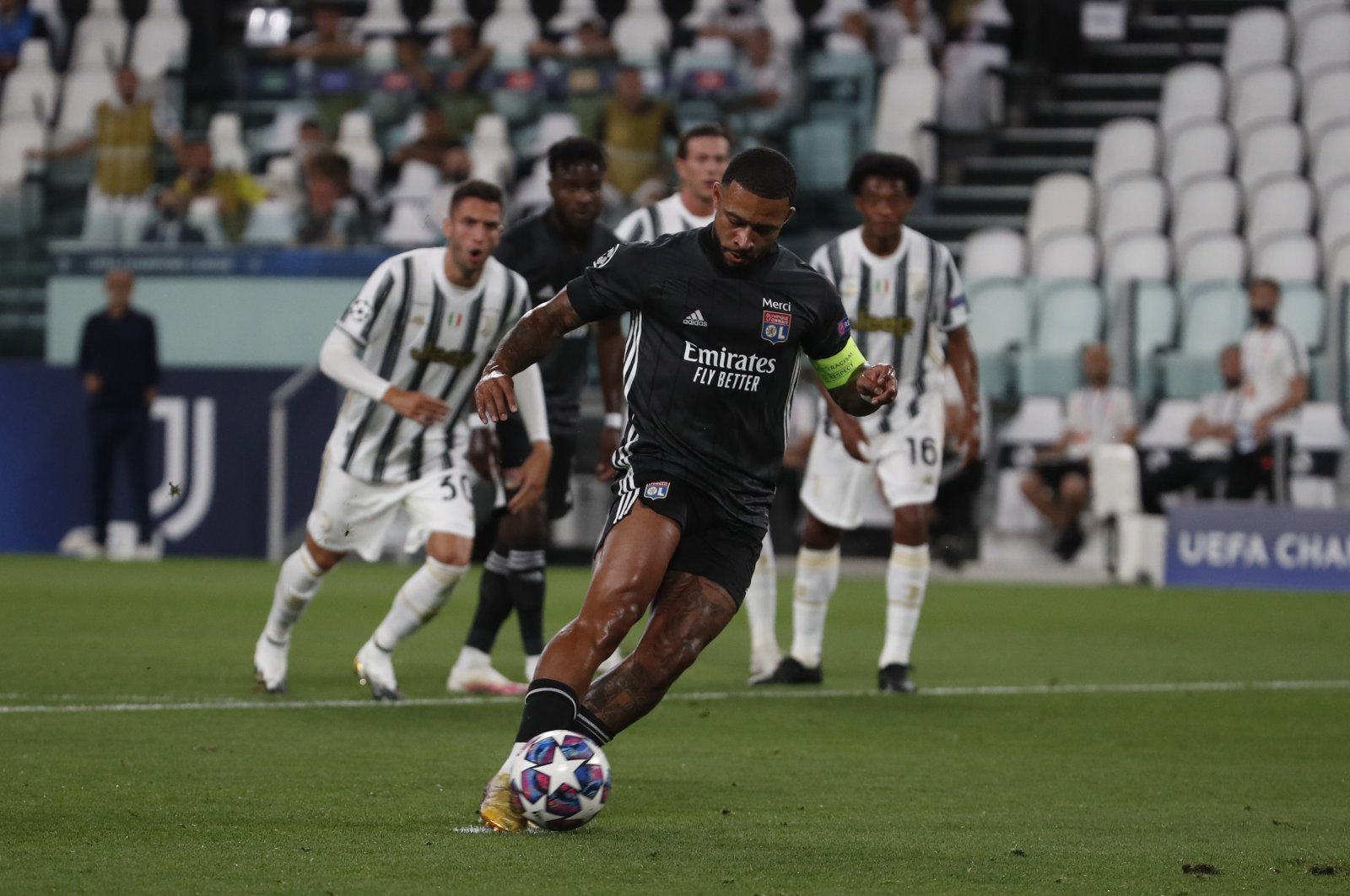 Looming like an insurmountable mountain after humiliating Barcelona 8-2 in quarterfinals, Bayern Munich stands in the way of Lyon's dream of reaching the Champions League final for the first time

Lyon captain Memphis Depay became one of the winners of the coronavirus pandemic as the long suspension of the Champions League has allowed him to feature for his club in the deciding stages.

Depay ruptured a cruciate knee ligament in December and would have missed the remaining domestic games had they been played as planned until the end of May.

But while the French league was controversially abandoned, the Champions League was postponed until August when he was fit to play again.

The Dutch winger returned in Lyon's League Cup final defeat against Paris Saint-Germain on the last day of July and just a week later scored the deciding goal in the last-16 match against Juventus – a Panenka-style penalty – that sent Lyon to the Lisbon finals.

Lyon continued its giant-killing ways with a 3-1 upset of Manchester City and now faces title favorite Bayern Munich on Wednesday.

Depay, 26, has flourished in Lyon after an unsuccessful spell at Manchester United from 2015 to 2017 and quickly became an important figure at the club.

He is also a rapper, a style icon and an activist, with almost 10 million followers on Instagram.

"Playing with him and without him are not the same thing," coach Rudi Garcia has said, and Brazilian midfielder Bruno Guimaraes has also heaped praise on him.

"He is a player that opponents do not like to face, he scares them. With us, he is very respected, he is our captain, a very important player. To be able to count on a player like him is truly great," Guimaraes told L'Equipe sports paper.

However, questions remain whether Depay will stay because Lyon will miss out on playing in Europe for the first time in two decades, unless they lift the trophy on Sunday for an automatic Champions League berth.

Lyon finished a mere seventh in the league, its worst placing since 1997. Club President Jean-Michel Aulas even tried to fight against the premature end of the league in court but was turned down.

Lyon won seven French titles in a row between 2002 and 2008 but has since been surpassed by PSG, especially since it came under Qatari ownership and started investing hundreds of millions into the likes of Neymar and Kylian Mbappe.

The big titles for Lyon these days are won by the Lyon women's team which has won the last 14 national titles, and six Champions Leagues since 2011.

The men's team is in the Champions League semifinals for only the second time, the first being in 2010 when they also ran into Bayern and lost both games in a 4-0 aggregate defeat.

Given Bayern's impressive form which culminated in an 8-2 thrashing of Barcelona on Friday, Lyon players know they face an arguably even more daunting task than 10 years ago.

"Bayern are a top side, we have to make sure we are ready," said forward Moussa Dembele who came on for Depay in the 75th minute against City and then scored the two deciding goals.

Garcia, in charge since December, said: "I hope we will be able to make it to the final. Our confidence is growing, but we must pull off a shock result like against Juventus and City."

If not, Lyon could face an exodus of players, with Depay, Dembele, midfielder Houssem Aouar and others then possibly moving on.

"Players who want to play in European competitions may want to leave if we are deprived of this option," Aulas was quoted as saying in May.

He added in reference to Depay, who has a contract until 2021: "His agent has told me that he would consider a departure if we don't make it to Europe."

Losing the best players is nothing really new for the club as over years the likes of Karim Benzema, Samuel Umtiti, Corentin Tolisso, Michael Essien, Alexandre Lacazette and Tanguy Ndombele have moved elsewhere for big fees.

The dilemma remains that unless teams play in Europe the French league is still rated inferior to those from England, Spain, Italy and Germany.

For that, the term "Farmers League" exists, and Lyon and Mbappe were quick to mock it after Lyon impressively followed PSG into the last four, the first time two French clubs have gone this far.

"No farmers here," Lyon tweeted with a winking emoji, and Mbappe also took to Twitter, repeating the phrase with a clown emoji and congratulating Lyon with three clap emojis.