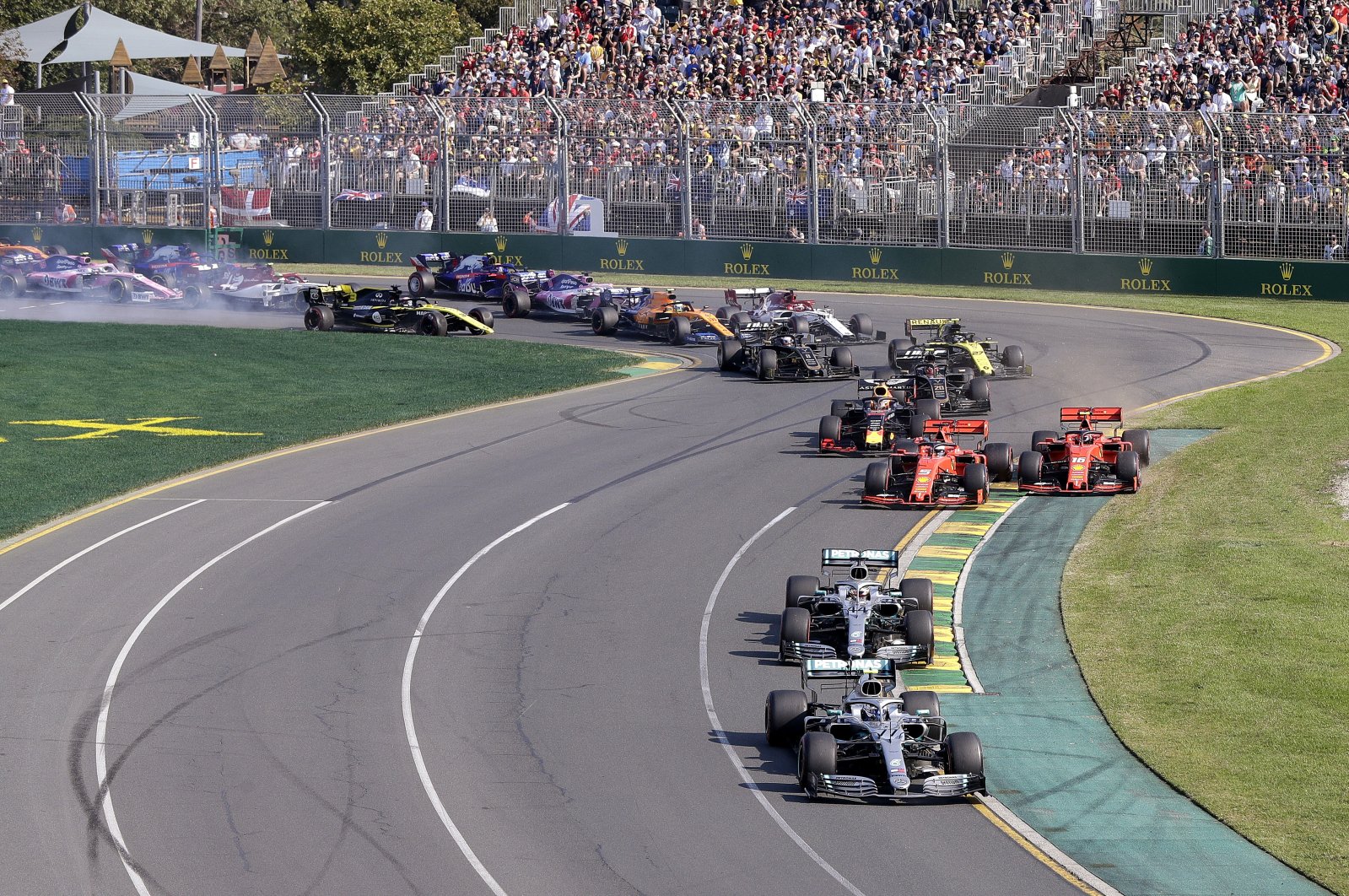 Mercedes driver Valtteri Bottas of Finland, bottom, leads the rest of the pack during the start of the F1 Australian Grand Prix in Melbourne, Australia, March 17, 2019. (AP Photo)
by Agencies Jan 12, 2021 11:42 am

Formula One's Australian Grand Prix was postponed to November and China's race was put on hold indefinitely as the coronavirus forced a 2021 calendar to rejig on Tuesday.

The Australian race, usually the season opener, was delayed from March to November, but no new date was set for the Chinese Grand Prix, normally held in April.

The announcement means a second season of coronavirus disruption for Formula One, which was delayed and truncated into 17 races in “bubble” conditions last year.

The record, 23-race 2021 season will now begin in Bahrain on March 28, a week later than the originally scheduled start in Melbourne.

"The global pandemic has not yet allowed life to return to normal, but we showed in 2020 that we can race safely as the first international sport to return," Formula One President Stefano Domenicali said in a statement.

Many of Formula One's teams are based in England where cases are surging, spurred by a more infectious new variant, further complicating matters.

Domenicali said talks were still underway about the Chinese Grand Prix. A Formula One statement said the Shanghai race would be held "later in the season if possible," citing travel restrictions.

"Obviously, the virus situation remains fluid, but we have the experience from last season with all our partners and promoters to adapt accordingly and safely in 2021," Domenicali said.

Organizers said they also expected crowds to return to grandstands for the 2021 season after the action took place behind closed doors last year.

Italy's Imola race returns to the calendar in the Chinese slot on April 18, while the location of a race scheduled for May 2 was yet to be announced.

Australia's new slot is Nov. 21, directly after races in the United States, Mexico and Brazil and before Saudi Arabia and the season finale in Abu Dhabi.

In addition to China, none of the American races happened last year, with the Netherlands, Singapore and Japan grand prixs also canceled.

The pandemic eventually forced organizers to reduce the 2020 season from 22 to 17 events, all held in Europe, Russia or the Gulf. The Turkish Grand Prix returned to the calendar for the first time after nearly a decade.

Despite the precautions, Lewis Hamilton, who won a record-equaling seventh world title last year, was one of the drivers to test positive.

In Melbourne, construction around the temporary Albert Park street circuit never got underway and tickets did not go on sale, but organizers said the rescheduling will now allow the event to go ahead in November.

"As the third-last race of the season, this provides the opportunity to safely host what could be the championship-decider in Melbourne in the lead-in to summer," said Australian Grand Prix chairperson Paul Little, according to Agence-France Presse (AFP).

"We'd like to thank our loyal motorsport fans and employees for their understanding in these challenging times."

Australia's success in suppressing the virus has enabled it to host several major sporting events, including India's ongoing Test cricket tour and next month's Australian Open tennis in Melbourne.

But Australia's travel restrictions remain a major hurdle for organizers of the Grand Slam, with tennis stars set to undergo a mandatory 14-day quarantine period.