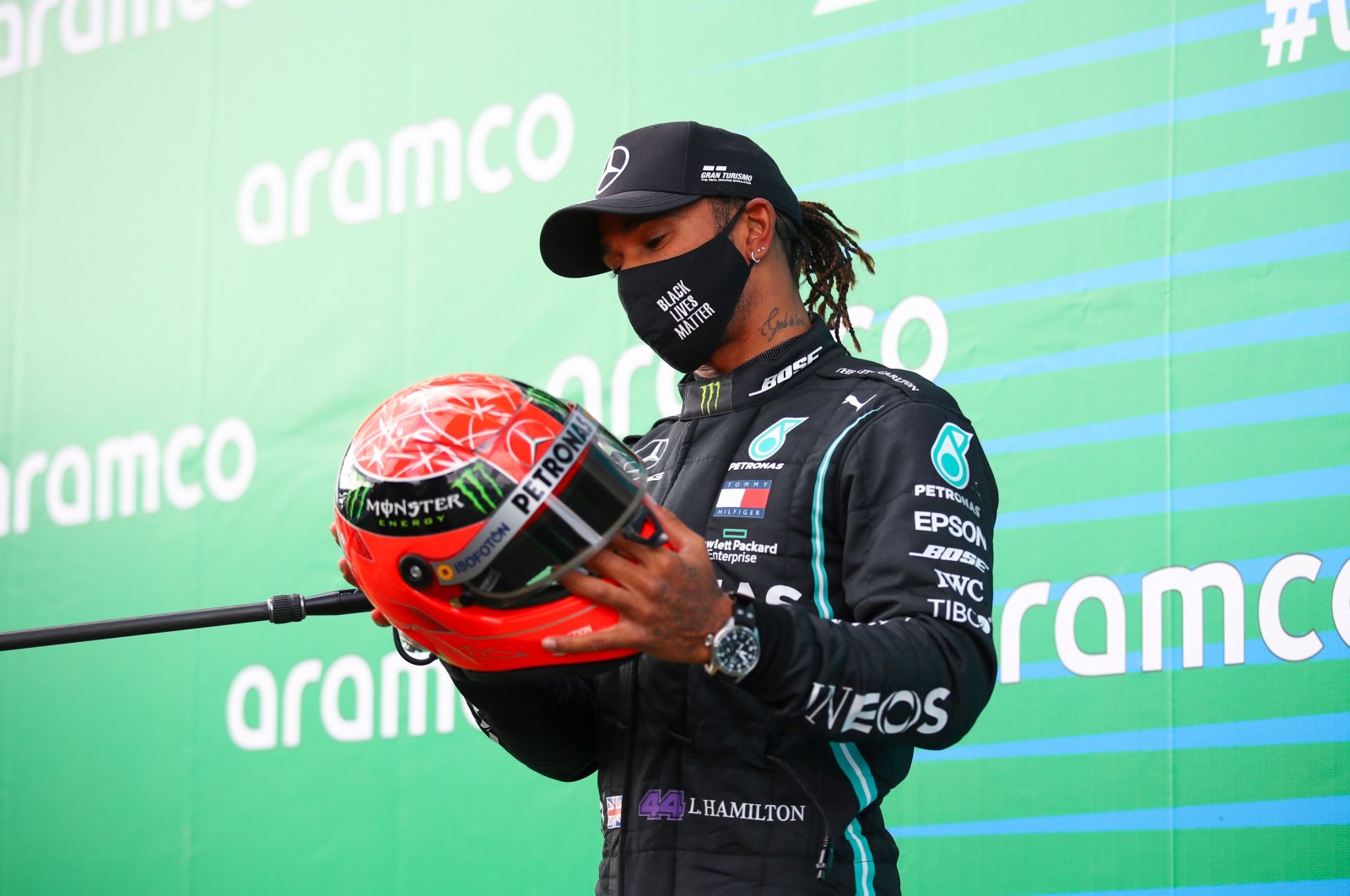 Lewis Hamilton will sooner or later gain sole possession of the Grand Prix race win record as he continues his pursuit toward another Formula One world title.

Sunday's victory at the Eifel Grand Prix saw the Briton draw level with Michael Schumacher on 91 victories, and there is little doubt he will also match his record seven world titles by the end of the season.

Schumacher's son Mick was on hand to gift Hamilton one of his father's helmets, from the 2012 season, Schumacher's last one in the sport before he was replaced by Hamilton at Mercedes.

Hamilton started the sport a year after Schumacher's first retirement in 2006 and got the milestone on the Nurburgring in the backyard of Schumacher who was born and raised in nearby Kerpen.

Mick Schumacher spoke of a "great achievement" as he handed over the red helmet, and the praise rained down on the 34-year-old Hamilton who has long transcended the sport and became a global star and anti-discrimination activist.

"He has pursued success with a relentless dedication that has seen him hone a virtuoso, natural talent into a precision tool he now wields without parallel in the sport," British paper The Guardian said on Monday, naming him "perhaps the complete driver."

Spain's La Vanguardia said that Hamilton "destroyed another Formula One myth," and in France Le Figaro named the 91 wins "mind-boggling."

Hamilton, who only raced against Schumacher between 2010-2012 when the German returned to help Mercedes in their return as a works time to get their bearings in the sport, was humbled in the end, after initially just saying that records are always to be broken.

He paid tribute to Schumacher, but also to Brazil's Ayrton Senna, and it could be at the Imola track where Senna crashed to his death in 1994 that Hamilton can gain sole possession of the race record in three weeks time unless he already wins again in a fortnight in Portugal.

"Like all of us I grew up watching Michael win all those Grands Prix and I could not even have fathomed equaling him. Getting to Formula One was the first step of the dream and emulating Ayrton," Hamilton said.

"Michael was just so far ahead, it's beyond my wildest dreams to think that I'm here today having equaled him and I just feel really humbled by the moment."

"Naturally everyone knows he is an icon and a legend of the sport. I think what he achieved in so many areas, but you know pushing the limits in terms of the physicality side, he really was a pioneer of being the fittest driver at the time and what he did at Ferrari was just remarkable."

"I think, hopefully, we've got more records to break and make."

There is little doubt about that. Hamilton has won seven of the 11 season races and tops the standings 69 points ahead of teammate Valtteri Bottas, whose early mistake Sunday allowed Hamilton to take the lead and never look back.

And with sweeping rule changes in the sport delayed until 2022, Mercedes could well maintain their total dominance since 2014 next year which would allow Hamilton to chase an eighth world title – provided he finally extends his contract beyond this season.

Mercedes motorsport chief Toto Wolff certainly hopes that they will continue their remarkable run into 2021 as they rule the sport in the same way as the Schumacher/Ferrari partnership did after the turn of the century.

"I remember watching F1 when Ferrari were winning every single championship. Now our team have been able to catch them up and seeing Lewis equalize Michael's winning record, it's much more emotional than I thought it would be," Wolff said.

"An amazing thing to witness and a fantastic drive by Lewis today."