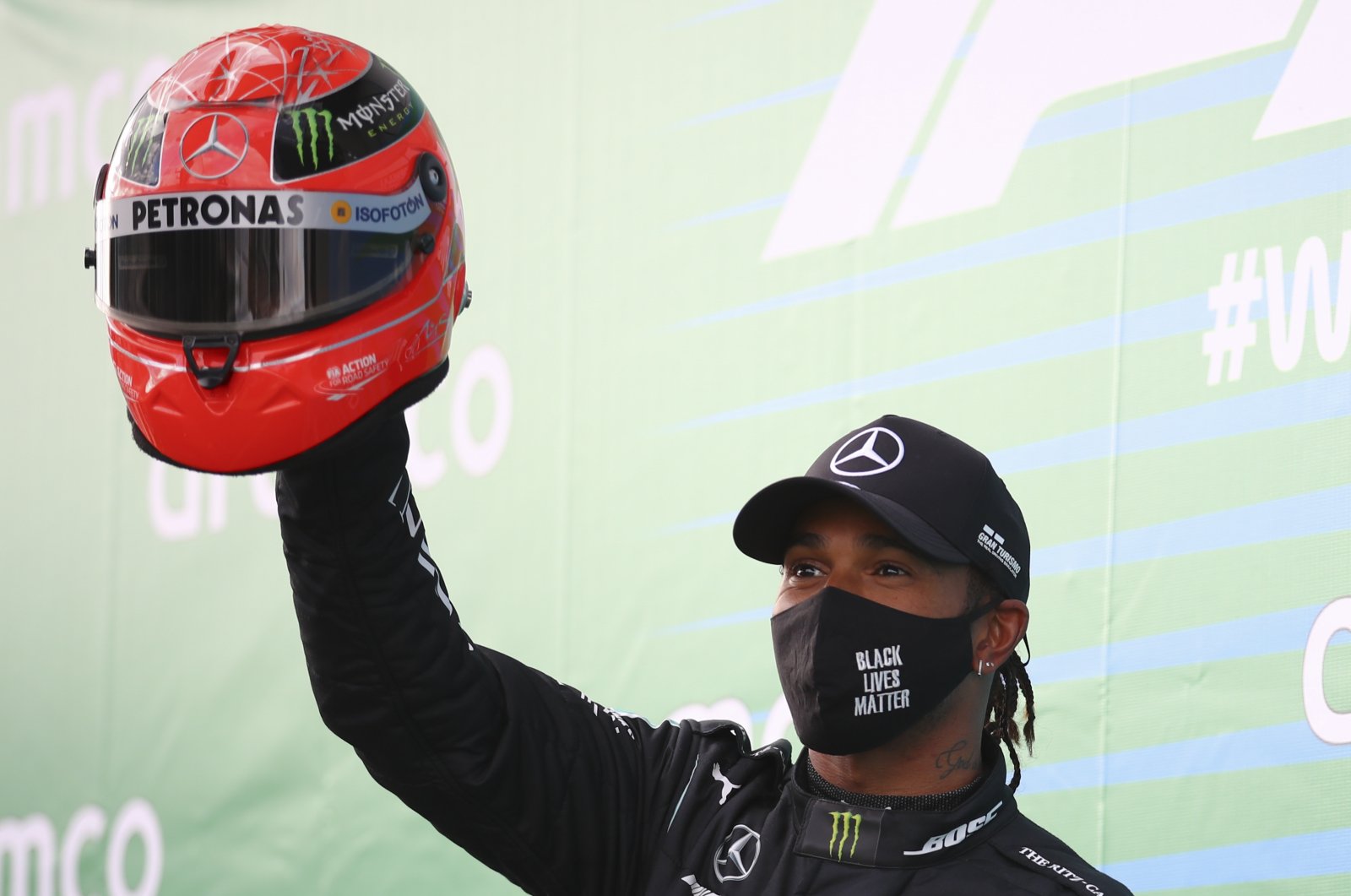 Lewis Hamilton shows a helmet of legendary driver Michael Schumacher, which was gifted to him, after he wins the Eifel Grand Prix in Nuerburg, Germany, Oct. 11, 2020. (AP Photo)
by Agencies
Oct 23, 2020 11:35 am

Lewis Hamilton and Mercedes seek to continue their record-making progress as Formula One escapes in search of some autumnal sunshine at this weekend's Portuguese Grand Prix at the Algarve International Circuit.

Two weeks after shivering at the Nurburgring where the six-time champion drew level with legendary driver Michael Schumacher on 91 wins, the traveling circus hopes also to avoid any contact with the growing second wave of COVID-19 across Europe.

The local organizers of the race, which marks Portugal's return to the calendar for the first time in 24 years, said there will be 27,500 spectators at the track each day under strictly controlled conditions.

Little more than a week after Racing Point's Canadian driver Lance Stroll tested positive for the coronavirus after falling ill and missing the Eifel Grand Prix, there is understandable concern about so many attending.

The lure of seeing Hamilton win a record 92nd race and Mercedes take an unprecedented seventh constructors' championship is a major attraction, though the team's triumph and celebrations are likely to be delayed by at least a week until the Emilia Romagna Grand Prix at Imola.

Hamilton has a simple goal to claim his record win, but Mercedes needs to outscore Red Bull by 40 points, a feat that would require a near-perfect showing and a flop from Max Verstappen.

If Hamilton triumphs, he would be the second driver to claim the record for winning most Grand Prix races in Portugal – four-time champion Frenchman Alain Prost having surpassed three-time champion Jackie Stewart's total of 27 wins at Estoril in 1987.

A Mercedes team success would also need Valtteri Bottas to be at his best and enjoy better fortune than he had in Germany, where a power unit failure dimmed his title hopes.

Team boss Toto Wolff, who this week rejected suggestions that he is planning his own F1 outfit, said Mercedes had identified a "failed electrical component" as the problem.

Few of the current field of F1 drivers have raced at the undulating Portimao track apart from some in junior formula events, but Hamilton has normally impressed with his ability to learn and shine on new circuits.

Stroll's likely return has been supported by his Racing Point boss Otmar Szafnauer as he, along with all team members, has tested negative ahead of this weekend's contest.

"All members of the team at the Eifel Grand Prix returned to the U.K. via a private charter flight and all tested negative upon arrival and again in a pre-event test for the Portuguese Grand Prix," said Szafnauer.

Stroll became the second Racing Point driver to have contracted COVID-19 this year, Sergio Perez having missed both Silverstone races in July.

In a statement about the attendance, the Portuguese government said the circuit had a capacity for 90,000 and fans would be seated with "safe spacing" in sectors of about 800.

One team hoping a return to Portugal brings a change in fortunes is likely to be Williams, which won four of the last five races held at Estoril, including 1996 when Villeneuve led teammate and world champion Damon Hill home in a famous one-two.

Williams, under new American ownership following the Williams family's decision to sell, is without a point this season.