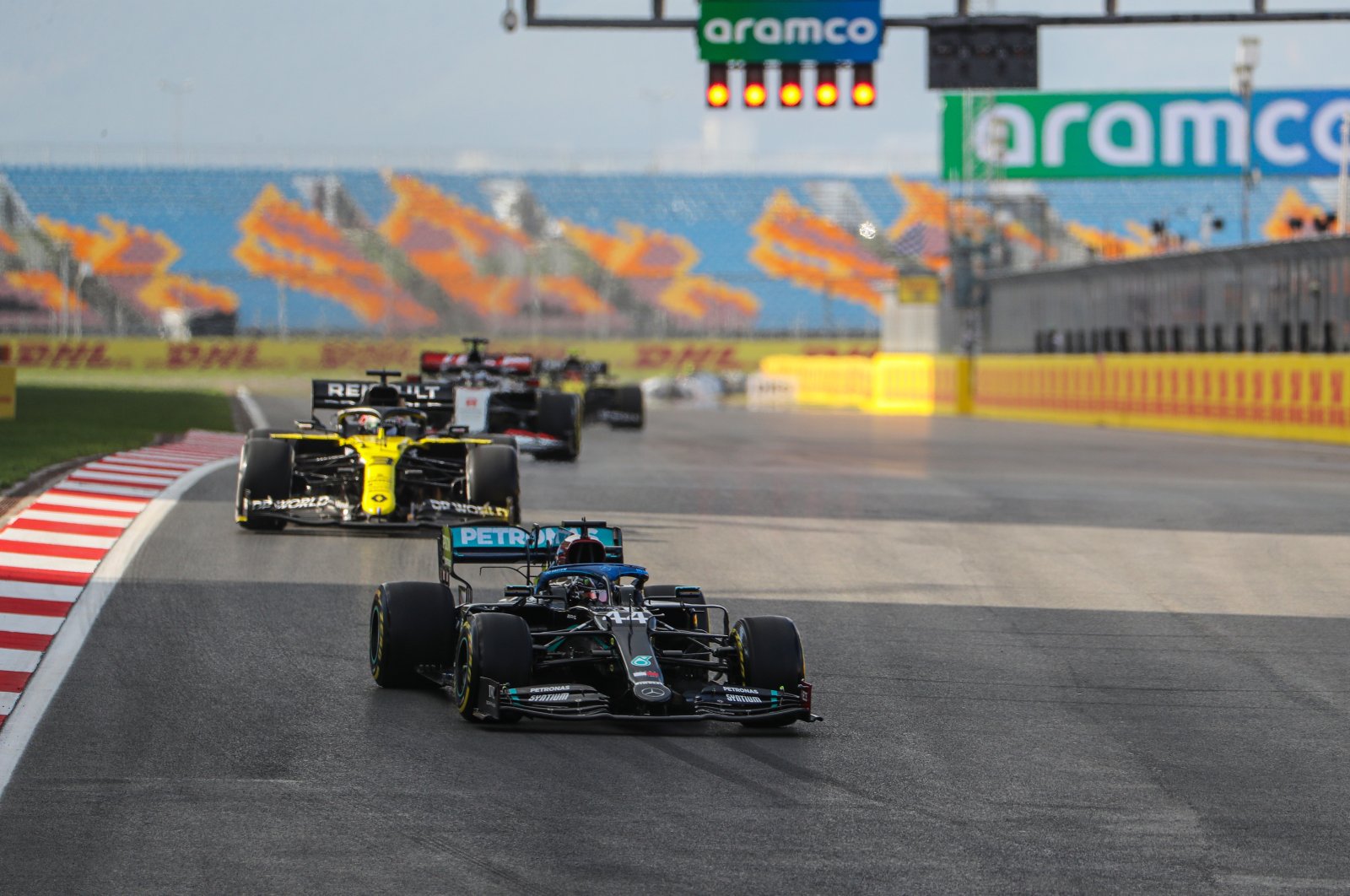 Mercedes driver Lewis Hamilton takes the lead during a practice session ahead of the Turkish Grand Prix in Istanbul, Turkey, Nov. 13, 2020. (AA Photo)
by Daily Sabah with Reuters
Nov 13, 2020 10:00 am

Formula One returns to Istanbul after almost a decade, with Mercedes driver Lewis Hamilton on the brink of winning his seventh world title and matching the record set by Michael Schumacher

Mercedes driver Lewis Hamilton only had a single championship title to his name almost a decade ago, when the last Turkish Grand Prix was held in the Istanbul Park circuit in 2011.

Sebastian Vettel had won the previous season’s title and would go on to dominate the sport for the next three more years, while Hamilton would still wait two more years to sign with Mercedes, where his epic quest to outmatch the greatest drivers of the sport would start.

Now, the Briton returns to Istanbul after nine years, with six titles under his belt and on the brink of claiming a seventh which could equal the record set by the sport’s legend Michael Schumacher, once thought unreachable by many.

The Mercedes ace, who has a record 93 race wins, will be champion again at the Istanbul Park track if his teammate and sole title rival Valtteri Bottas fails to score eight points more.

The 35-year-old Briton leads Bottas by 85 points, with 78 remaining to be won after Turkey when the season heads to the Middle East for a closing triple-header in Bahrain and Abu Dhabi.

That means a second place would be enough even if Bottas wins, providing the Finn does not also take the bonus point for fastest lap.

At its simplest, Hamilton just has to beat Bottas – something he has done 10 times in 13 races so far this year.

Hamilton, who already holds records for most pole positions, podiums and points finishes, has only twice finished out of the top three in 2020 with a worst result of seventh. He is on a record run of 46 successive scoring finishes.

Mercedes won the constructors' title for an unprecedented seventh year in a row at Imola in Italy on Nov. 1 and is assured of a seventh successive drivers' crown as well.

"We, as a team, have done such a remarkable job," said Hamilton after that success, saying the team title was "almost better" than the drivers'.

Hamilton, who has yet to sign a contract beyond this season, may feel differently on Sunday.

Apart from Hamilton’s title quest, this weekend will be the first time that the AlphaTauri racing team competes in Turkey.

The race will also mark the 300th Grand Prix for Red Bull.

While the title race will be the focus of Sunday, Formula One’s return to Istanbul will be welcomed by all.

The circuit, with some of the most intense turns in Formula One, was always a driver favorite even if crowds were sometimes small. This weekend they will be nonexistent, with the race behind closed doors due to the pandemic.

Although many of the drivers will be racing at Istanbul Park for the first time, the return of the Turkish Grand Prix was welcomed by the sport’s veterans.

In a short video released by Mercedes on Twitter, Hamilton said it was “good to be back” in Istanbul after a long time.

"It’s a track that made for good racing in the past, so it will be interesting to see how the modern Formula One cars do on it," said Alfa Romeo's Kimi Raikkonen, who won the first Turkish Grand Prix for McLaren in 2005.

While the technological advancements and changing regulations will surely introduce fresh takes on Istanbul Park’s corners, the circuit features 14 turns in total with the most notorious among them being Turn 8, earning itself the nickname of “diabolica” with its four apexes.

Called a “pain in the neck” by now-retired Mark Webber due to the sustained G-forces drivers had to endure during the eight-second turn, the triple left-hander is also a favorite of Ferrari driver Sebastian Vettel.

Another corner to challenge the drivers during Sunday’s race will be the sharp downhill left-hander Turn 1.

Red Bull driver Max Verstappen, who will be racing at Istanbul Park for the first time, said he was ready to take on the Turkish Grand Prix.

"I think it will be a good track to overtake on, there are so many straights and the corners are quite wide,” he was quoted as saying by Red Bull on Twitter.

Formula 1 returns to Turkey with a bang as Lewis Hamilton prepares to make history by equaling Michael Schumacher’s record 7 titles with a win at #TurkishGP https://t.co/ZyZTMPaMEv pic.twitter.com/I6Mtuih4di

Following the reintroduction of Istanbul to the Formula 1 calendar, Turkey voiced its desire to make sure the sport’s return was a permanent move instead of a one-time deal.

"Our goal is to sign a long-term contract next year and permanently join the calendar," said Vural Ak last month, the chairperson of Intercity, which operates the Istanbul Park racetrack.

But a provisional calendar released by Formula One on Tuesday showed the Istanbul Park track missing from the 2021 season.

The organizers left Vietnam’s original date – April 25 – empty on the calendar after the race in Hanoi was removed from next year’s calendar, and it could be filled with the Turkish Grand Prix if both parties can reach an agreement.

“It is quite difficult to even plan for the next couple of months. While we are in November, it is still too early to decide on the entirety of the 2021 calendar yet,” he said.

“All I can say that Istanbul is a great city for Formula One. The track is fantastic, and we see great cooperation from the Turkish government,” Nielsen said and added: “The talks are still underway, and I think they will conclude positively.”