Hamilton takes pole for Turkish GP ahead of teammate Bottas 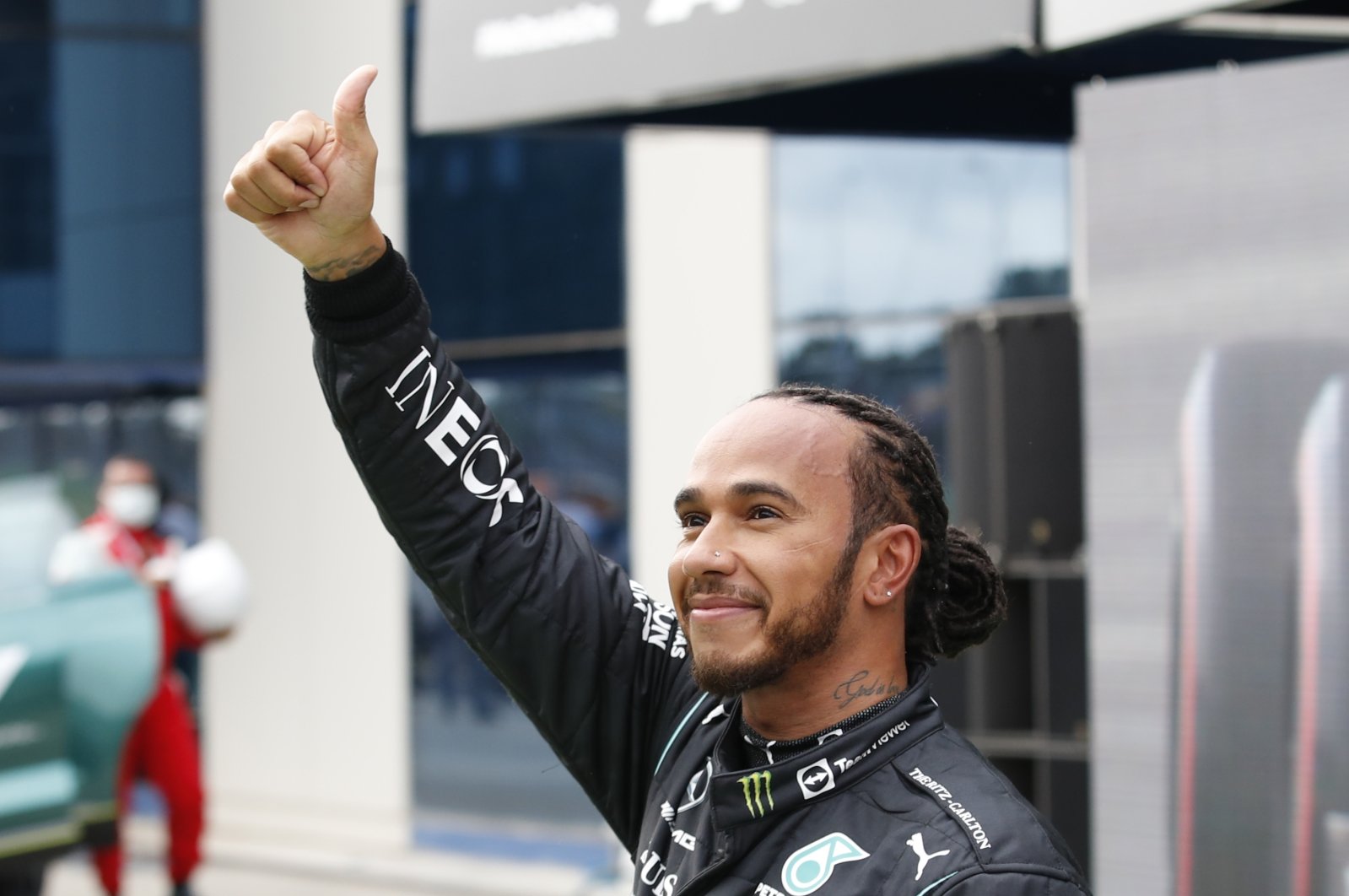 Mercedes driver Lewis Hamilton of Britain, reacts to the crowds after the end of qualifying for Sunday's Formula One Turkish Grand Prix at the Intercity Istanbul Park circuit in Istanbul, Turkey, Saturday, Oct. 9, 2021. (AP Photo)
by ASSOCIATED PRESS
Oct 09, 2021 6:07 pm

Lewis Hamilton found a silver lining on Saturday ahead of Valtteri Bottas, dominating qualifying for the Turkish Grand Prix to minimize the damage from the 10-place grid penalty Mercedes decided to incur by changing his engine ahead of the race.

Due to the grid penalty, Bottas will be on the front row with Max Verstappen and Ferrari’s Charles Leclerc just behind in third, alongside AlphaTauri’s Pierre Gasly in fourth, after a strong final lap from Gasly.

“It was a tricky session, there were still some damp patches (on track),” Hamilton said. “I imagine tomorrow is going to be difficult to move up. We’ve got the long straight down the back, so we’ll see what we can do.”

Hamilton will go for a record-extending 101st F1 win while Verstappen chases an 18th.

Verstappen felt the car improved after some complications in Friday's two practice sessions.

“The laps were quite good. We lost a bit down the straight, we’ll have to look into that. Overall, quite a decent recovery from yesterday," Verstappen said. “Let’s wait and see what the weather will do overnight. Let’s see how competitive we will be in the race. Obviously tire wear is quite high around this track. But the track is very fun to drive.”

Bottas is still seeking his first win of the season and could get it this time with Hamilton perhaps too far back to challenge.

"I’m on pole so should be good," the Finnish driver said. “I’ll focus on my own race tomorrow and try to keep up the good pace.”

As the afternoon rain started to fall, drivers tried to do quick early laps in Q1 before the track got too wet.

Ferrari's Carlos Sainz Jr. spun off track and got back on, as did AlphaTauri's Yuki Tsunoda, while Hamilton went wide on Turn 5.

Hamilton topped Q1 ahead of Verstappen and Bottas, while McLaren's Daniel Ricciardo – winner of eight F1 races – was the biggest name among the five knocked out of it.

“I struggled to get more out of the soft tires," Ricciardo said. “No excuses.”

Although Hamilton again topped Q2 ahead of Bottas and Verstappen, he also complained of not getting enough heat into his tires.

Leclerc had an issue with downforce and lost the rear of his Ferrari as he slid off track midway through Q2. That damaged his tires a little and put him at risk of not qualifying for Q3. But the driver from Monaco got through on his last lap, while four-time F1 champion Sebastian Vettel missed out for Aston Martin.

The 5.3-kilometer (3.3-mile) Istanbul Park circuit was fairly dry by Q3 and Hamilton took control without too much trouble.

He leads Verstappen by two points in a thrilling title race but could well be overtaken by the Dutchman. Hamilton trails Verstappen 7-5 for wins and 7-4 for poles this season and there are six races to go after Turkey.

Earlier, Gasly posted the fastest time in a rainy third and final practice. He led from Red Bull driver Sergio Perez and Verstappen. Hamilton was way down in 18th spot but hardly took part because he was saving tires for qualifying.

The final session was halted for a few minutes approaching the halfway point when Williams driver George Russell went off the track and into gravel.

Verstappen, Vettel and Leclerc all did 360-degree spins before regaining control of their cars.

Sainz Jr. starts from last after a complete engine change earlier this week.