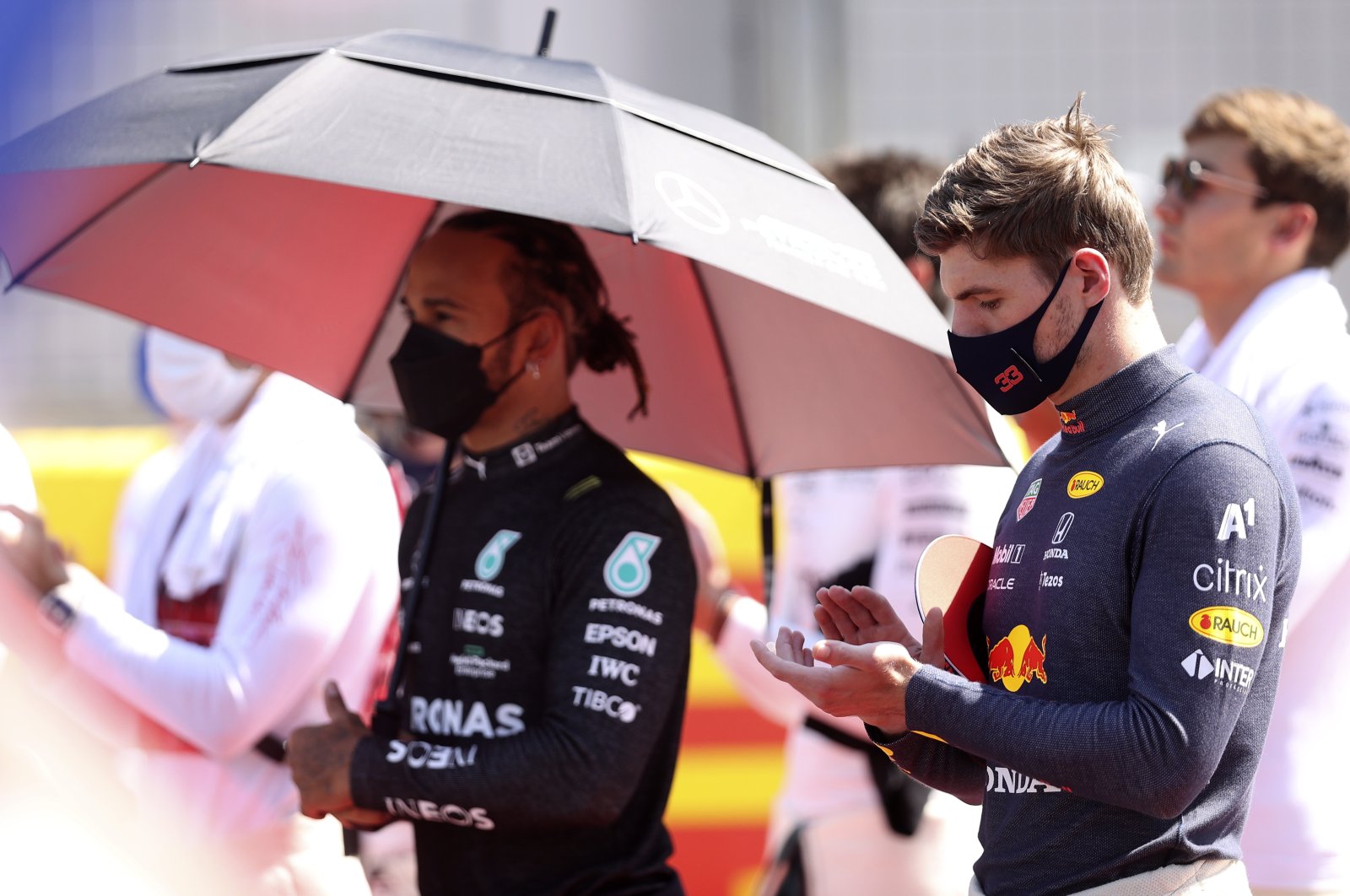 Red Bull driver Max Verstappen of the Netherlands and Mercedes driver Lewis Hamilton of Britain (L) stand on the grid before the start of the British Formula One Grand Prix, at the Silverstone circuit, in Silverstone, England, July 18, 2021. (AP Photo)
by French Press Agency - AFP Jul 29, 2021 12:55 pm
RECOMMENDED

The Formula One circus arrives in Budapest this weekend as world champion Lewis Hamilton faces a high-pressure challenge, on and off the track at the Hungarian Grand Prix, where he will be looking to pick up a 100th career victory.

After reducing Max Verstappen's lead in the world championship to eight points at Silverstone, where he won for Mercedes after a controversial opening-lap collision with the Dutchman for which he was given a 10-second penalty, the defending seven-time champion has an opportunity to regain the initiative in the title race.

The 36-year-old Briton has won a record eight times at the dusty, tight and twisty high down-force Hungaroring circuit where he completed a hat-trick last year and expects another close scrap Sunday.

By then, however, he may have had his British win overturned, or put in jeopardy, if Red Bull has its way at a stewards' hearing Thursday and succeed in gaining a review of Hamilton's penalty.

They say it was too lenient. Mercedes disagree.

The British Grand Prix collision prompted a war of words led by Red Bull, but neither driver has become involved since the dust settled.

Verstappen, who escaped without serious injury, distanced himself from the argument after saying that he felt Hamilton had been disrespectful to celebrate his victory while he lay in a nearby hospital.

"I don't have much to say on all the media hype and, to be honest, I'm not interested in getting involved in any of that," he said.

"I know what happened at Silverstone as I was in the car and obviously I feel a certain way about how my race ended.

"But now I'm just focusing on making sure we are the best we can be on track so we can stay ahead in the championship.

"The team can take care of the official side of things and anything that needs looking into after the crash, but my job is the same as always – to be the best I can and try to win on Sunday."

He added: "I'm a little bruised, of course, but that's normal after such a big impact, but I'm training and feeling good."

Verstappen added that he had completed a race distance test in the team's simulator without any adverse reaction ahead of the final round in his "battle of the generations" with Hamilton ahead of the sport's European summer break.

In the aftermath of his 51-G crash, it is likely that Verstappen will be bruised psychologically as much as physically and he knows now that Hamilton will not always back off when they are racing wheel to wheel.

German Nico Rosberg, who beat Hamilton to win the 2016 title after a fierce season of intra-team rivalry at Mercedes including a collision in Spain that gifted Verstappen his maiden win for Red Bull, believes the title fight this year has become compelling viewing.

"It was an amazing battle and now as a pundit and as a fan it's so awesome. I'm personally excited now for the next race. How is the dynamic going to play out? Even just the next press conference on Thursday – I hope F1 put them in next to each other."

Rosberg said the crash was a racing incident and, to him, no surprise and said the title race reminded him of previous battles between the generations.

Both Mercedes and Red Bull will Thursday attend a virtual hearing to decide if there should be a review.

While the title contenders will arrive in Budapest on tenterhooks, Alpine's Fernando Alonso will relish the weekend for different reasons as he celebrates his 40th birthday back at the circuit where he gained his maiden F1 victory in 2003.