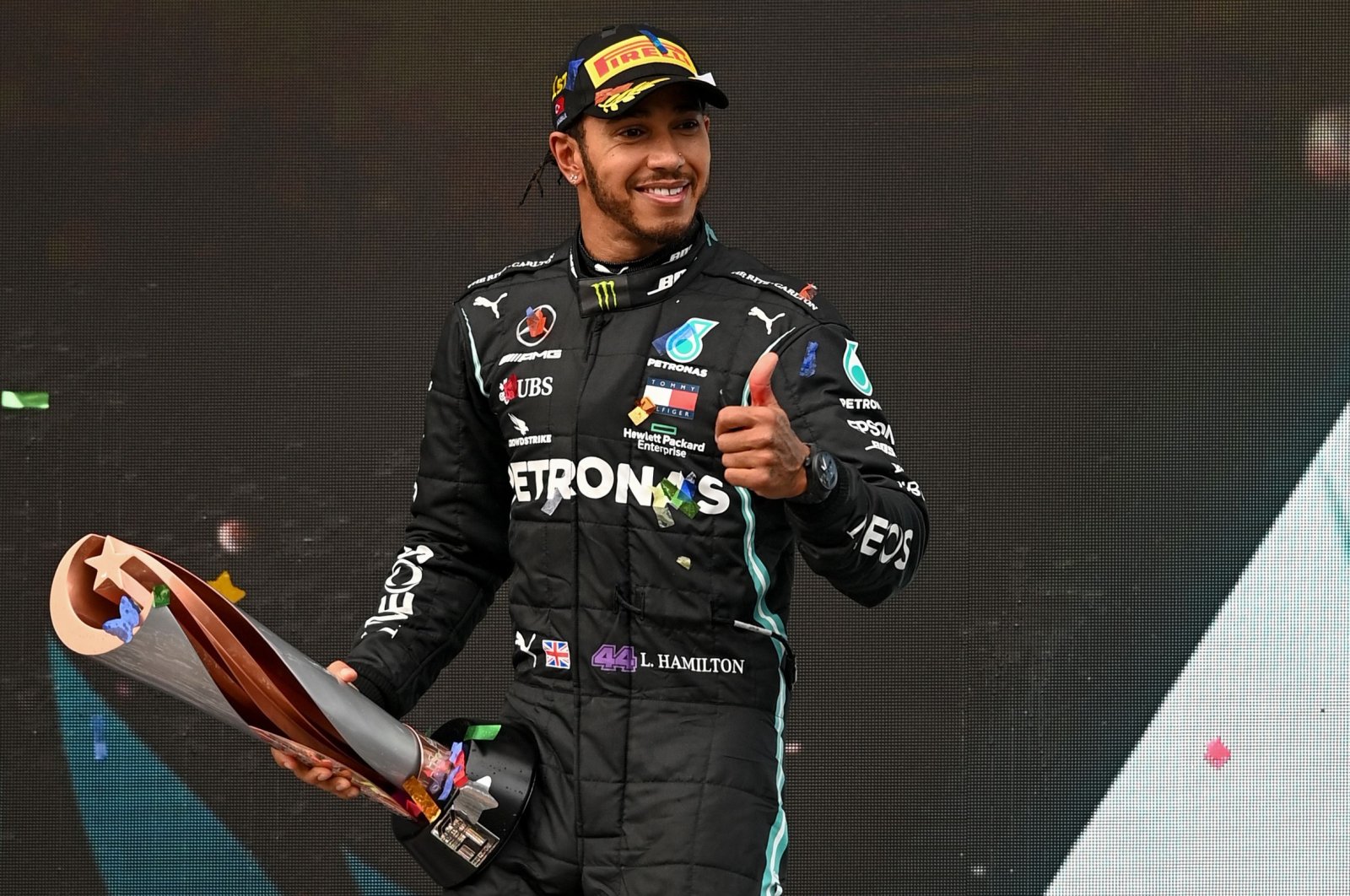 Lewis Hamilton clinched a record-equaling seventh Formula One title on Sunday after winning a wet and gloomy Turkish Grand Prix that marked the sport's return to the country in nearly a decade.

Hamilton now stands alongside F1 great Michael Schumacher on seven titles, having replaced the German driver at Mercedes in 2013.

Hamilton only needed to finish ahead of his teammate Valtteri Bottas to seal his sixth title for Mercedes, and Bottas placed a lowly 14th after making a poor start.

He seemed to be in tears when he spoke on the team radio moments after crossing the line in Istanbul.

"That's for all the kids out there who dream the impossible," Hamilton said. "You can do it."

Then, speaking a short time later, he wiped away tears.

"I'm definitely a bit lost for words," Hamilton was quoted as saying by Associated Press (AP). "I dreamed of this as a kid. This is way, way beyond our dreams."

The British driver started from sixth place but took advantage of errors and poor tire strategies from other teams to win a fourth straight race and 10th of another hugely dominant season.

"I know I often I say it is beyond wildest dreams but my whole life secretly I have dreamt as high as this," said Hamilton. "It felt so far-fetched. I remember watching Michael win those world championships. To get one or two or even three is so hard.

"Seven is unimaginable. There is no end to what we can do together, me and this team."

The Briton's Turkish GP trophy was awarded to him by Turkey's Parliament Speaker Mustafa Şentop at the podium.

Aside from Şentop, Youth and Sports Minister Muharrem Kasapoğlu, Industry and Technology Minister Mustafa Varank, Istanbul Governor Ali Yerlikaya and Istanbul Mayor Ekrem Imamoğlu were among to high profile officials watching the monumental race – both for Turkey and Hamilton.

Hamilton placed about 30 seconds ahead of Racing Point's Sergio Perez and Ferrari's Sebastian Vettel, who overtook teammate Charles Leclerc for his first podium of a difficult season.

It was also Perez's first podium of the campaign, while teammate Lance Stroll finished only ninth despite leading from pole position for much of the 58-lap race.

Vettel, a four-time F1 champion, was quick to congratulate his longtime rival, crouching by his cockpit and shaking his hand as he spoke.

Stroll started from pole ahead of Red Bull's Max Verstappen on a resurfaced and skiddy circuit not used in F1 since 2011, compared to an "ice rink" by Hamilton.

A chaotic start saw Verstappen stall while Hamilton moved up to third only to lose grip and get overtaken by Red Bull's Alexander Albon and Verstappen. Vettel made a great move from 11th to third, but Bottas spun and dropped right down.

The virtual safety car was activated on Lap 13 after Alfa Romeo's Antonio Giovinazzi pulled over on the side of the track.

At the restart, Hamilton tried to overtake Vettel but locked his tires, while Albon passed Hamilton and Vettel to move into the fourth spot.

The impatient Verstappen pushed too hard behind second-place Perez and lost control to spin twice on the track. He boxed for new tires again on Lap 19.

Halfway through the race, Stroll and Perez were ahead of Hamilton but losing ground. Stroll came in for new tires on Lap 37 and Hamilton used DRS to get past Perez one lap later and take the lead.

Stroll's tire change backfired and he was soon passed by both Ferraris, while Bottas spun for the fourth time at the back of the pack. On a humiliating day for the Finnish driver, he was lapped by Hamilton near the end.

The son of a black father and a white mother, whose parents separated in his youth, Hamilton, 35, grew up on a municipal housing estate. His father Anthony at one time held down three jobs to fund his son's embryonic racing career in karting.

Hamilton's journey was unprivileged and without luxury, but it was clear from an early age that he had an outstanding gift for speed and all the gutsy natural instincts of a born racer.

In 1995, aged 10, and wearing a jacket and shoes borrowed from his predecessor as British Formula Cadet karting champion, he went to a glittering awards ceremony in London where he met McLaren's then-boss, Ron Dennis.

He asked for an autograph and told him "one day I want to race for you". Dennis replied: "Phone me in nine years and I'll sort you a deal."

Bold, determined and individual, he almost won the title in his first record-breaking season as he reeled off nine successive podiums from his debut in Melbourne, rocking the establishment along the way with his speed and his style.

On and off the track, he was fast, somewhat mercurial and occasionally tempestuous and the combination led to a fierce rivalry with teammate and two-time champion Fernando Alonso at McLaren.

That was a signal of how tough it was to be for all his future teammates as Hamilton, who narrowly missed out on the 2007 title, returned to triumph in 2008 with a dramatic last-gasp fifth-place finish in Brazil.

He also showed frustration as McLaren failed to deliver the speed to beat Sebastian Vettel and Red Bull, who reeled off four straight title triumphs from 2010 to 2013, by which time Hamilton had departed for Mercedes.

Escaping the management regime of Dennis and his father, Hamilton found freedom at Mercedes alongside teammate Nico Rosberg, his teenage karting friend and rival.

This enabled Hamilton to express himself with a headline-grabbing trans-Atlantic lifestyle, mixing with musicians and "fashionistas."

He showed little love for any duty to obey conventions and, for many observers, gave his sport a welcome injection of freshness and diversity as champion again in 2014 and 2015.

Rosberg broke Hamilton's sequence of supremacy in 2016 and then retired, leaving the Englishman to dominate.