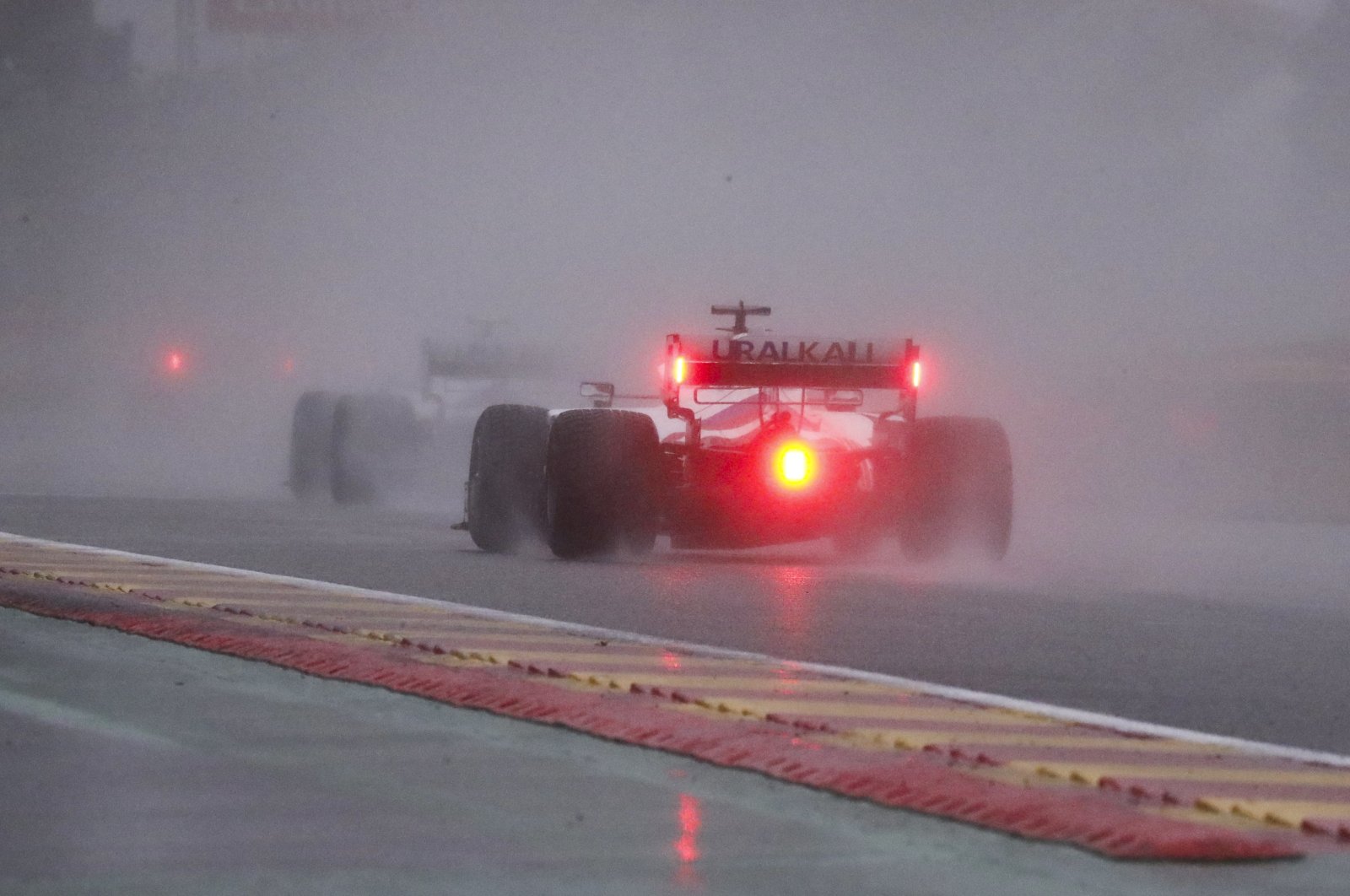 Russian Formula One driver Nikita Mazepin of the Haas F1 Team in action during the Formula One Grand Prix of Belgium at the Spa-Francorchamps race track in Stavelot, Belgium, Aug. 29, 2021. (EPA Photo)
by French Press Agency - AFP Aug 29, 2021 7:45 pm
RECOMMENDED

Heavy rain repeatedly delayed the start of the Belgium Grand Prix at a drenched and dangerous Spa-Francorchamps circuit on Sunday.

But after two laps with the spray flying the race was suspended.

If no more racing is possible half points will be awarded, with pole sitter Max Verstappen picking up 12.5 points.

The signs were ominous from the start of the afternoon when Verstappen's Red Bull teammate Sergio Perez aquaplaned out of contention on his way to the original start at Les Combes.

After the safety car gingerly led the 19 remaining cars on a formation lap with the spray flying and drivers like McLaren's Lando Norris complaining of lack of visibility, the red flag was raised signalling a suspension of the start procedure.

"It's pretty awful. I can barely see the car in front at the minute," Norris said over the team radio.

Organizers were anxiously watching their weather monitors and the sky for a break in the weather, notoriously mercurial at the majestic circuit nestled in the Ardennes Forest.

Approaching two hours after the scheduled start the rain had still not relented as the three hour deadline for the race to be completed loomed.

Mercedes team chief Toto Wolff commented: "In my opinion if it (the weather) doesn't change it's too dangerous. As much as I love racing, this is maybe a step too far."

Despite huge advances in car safety, organizers will have been very mindful of ensuring conditions were safe enough to resume at a notoriously demanding track where in 2019 French racer Anthoine Hubert died in a Formula 2 race.

The track was lined by 75,000 umbrella-clutching die-hard fans, some eating soggy fries and mayonnaise but the bulk of them braving the conditions in support of local favorite Verstappen.

During the delay drivers busied themselves filling in the wait in different ways – George Russell taking to Twitter, Antonio Giovinazzi taking a nap on some Alfa Romeo crates and Daniel Ricciardo leading a Mexican wave in the pitlane stand.

And Sebastian Vettel, Aston Martin's four-time former world champion, showed a neat touch in a two-a-side game of football against a Haas selection led by Mick Schumacher in the pits.

Thirty years ago at the same circuit, Schumacher's father Michael took the first steps on the road to becoming a F1 legend, picking up a spare drive for Jordan when the team's French driver Bertrand Gachot was otherwise engaged serving a prison sentence for assault.

Meanwhile Red Bull mechanics had been busy repairing Perez's car and after detailed dialogue between Red Bull and the race stewards the team were told Perez could compete at the back of the grid.

With the Mexican's car miraculously repaired, all he and the others needed was a race to drive it in.

Russell tweeted: "To all the fans getting soaked out here at Spa right now, sorry to keep you waiting and thanks for braving the weather! We know it's frustrating for you all, but safety has to come first. Fingers crossed we can get a result today one way or another."

To all the fans getting soaked out here at Spa right now, sorry to keep you waiting and thanks for braving the weather! We know it’s frustrating for you all, but safety has to come first. Fingers crossed we can get a result today one way or another.

A green water clearing truck with giant rollers emerged from the gloom, raising hopes of a gear being changed in anger.

Then the announcement to race came, prompting a flurry of activity with teams rushing to get ready for racing and a huge cheer from the patient fans.

But their joy was to be short lived with the cars returning to the pitlane as conditions were deemed too dicey.

If organizers decide not to try again, Williams' Russell, who produced a standout Q3 lap on Saturday to start alongside Verstappen on the front row, picks up nine points.