Nail-biters set tone for Saturday as Oregon, SDSU squeak by 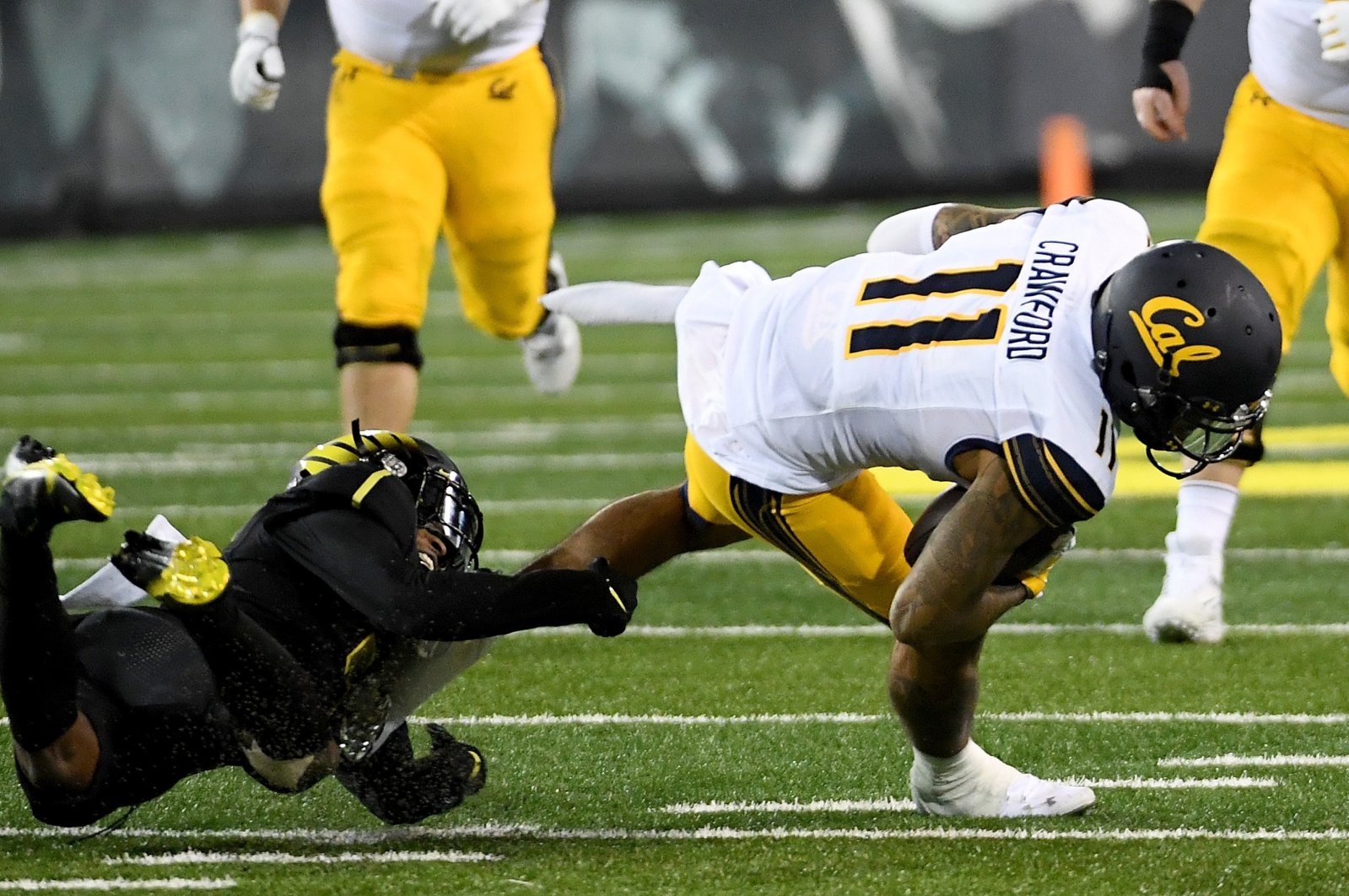 Cornerback Mykael Wright (2) of the Oregon Ducks tackles wide receiver Kekoa Crawford (11) of the California Golden Bears during the second half of the game at Autzen Stadium, Eugene, Oregon, U.S., Oct. 15, 2021. (AFP Photo)
by ASSOCIATED PRESS Oct 16, 2021 11:15 am
RECOMMENDED

Two Top 25 teams were in action Friday night, and both games came down to the wire, setting the tone for another weekend of close games and potential upsets as the college football season hits the midway point.

No. 9 Oregon Ducks quarterback Anthony Brown shut out the noise to engineer a fourth-quarter comeback, then let the defense seal a victory over California. In the other matchup, No. 24 San Diego State needed double overtime to knock off San Jose State in a game that did not feature a single touchdown during regulation.

Anthony Brown scored on an 11-yard keeper with 4:50 left and the ninth-ranked Ducks held off surprisingly tenacious Cal 24-17 on Friday night.

The Golden Bears took a 17-10 lead early in the final quarter, but Brown answered with a 20-yard touchdown pass to Jaylon Redd to tie it. The Ducks (5-1, 2-1 Pac-12) pulled in front on Brown's scamper into the end zone.

Cal threatened on the ensuing possession. The Golden Bears got to the Oregon 3 after Chase Garbers' fourth-down pass to Kekoa Crawford preserved the drive, but his fourth-and-2 attempt with just 2 seconds left fell incomplete.

Oregon was coming off a bye following an overtime loss at Stanford. The rebound win was the Ducks’ 16th straight victory at Autzen Stadium.

Travis Dye ran for 145 yards and a score as Oregon leaned on him in the absence of CJ Verdell, who was injured against Stanford and is out for the season.

Brown threw for 244 yards and a touchdown, while rushing for 44 yards and another score. But he faced boos from the Autzen crowd earlier in the game as Oregon's offense sputtered.

“He’s a great leader, he’s willing to step up in those big moments and he’s not afraid to shy away from those moments. He shows that time and time again,” said offensive lineman Ryan Walk. “We saw that tonight, when the going was getting tough there he stepped up, grabbed the offense, he said, `We're going to get this thing right, let's get it going.'”

California (1-5, 0-3) has not defeated an FBS opponent this season – the team’s lone win came against Sacramento State.

Garbers, who went into the game leading the league in total offense (281.2 yards per game) and ranked third in passing yards (249 per game), threw for 242 yards and two touchdowns.

Cal, also coming off a bye, defeated Oregon last season in Berkeley, 21-17, with Garbers accounting for a pair of touchdowns, one via pass and the other on a keeper.

Verdell, who led Oregon with 406 yards rushing and six touchdowns, injured his left leg during the Ducks’ 31-24 overtime loss to Stanford. Bennett Williams, who had three interceptions this season, broke his leg in practice before the game and was also out for the season.

Oregon looked out of sorts at times on offense. The Ducks were driving late in the second quarter before Kris Hutson fumbled on the Cal 11 and the Golden Bears recovered.

Oregon went up 10-7 on Dye's 11-yard touchdown run and took the lead into halftime. Cal tied it in the third quarter on Dario Longhetto's 45-yard field goal.

Garbers found Gavin Reinwald with a 4-yard touchdown pass to give the Golden Bears a 17-10 lead.

“We went down and scored there late in the game. And then came back and they got a big kick return on us and then went right down and scored and tied it up," Wilcox said. “So the momentum seemed to shift a little bit. I thought the guys stayed with it and kept competing really in every phase, and that gave us a chance to win the game in the end, but unfortunately we didn’t quite get it done.”

Johnson threw TD passes to Jesse Matthews in both overtime periods for his only completions of the game as No. 24 San Diego State finally got going offensively after a rough regulation and beat San Jose State 19-13 Friday night.

Johnson relieved an ineffective and banged-up Jordon Brookshire in the fourth quarter and came through in overtime after a few shaky moments in regulation.

“We just thought we were a little stagnant and we needed to do something different,” coach Brady Hoke said.

Neither team scored a touchdown in regulation before Johnson delivered a 14-yard pass on the opening possession of overtime for the Aztecs (6-0, 2-0 Mountain West).

But Trenton Thompson intercepted Nick Nash to start the second overtime to set the stage for Johnson and Matthews.

“We’ve never been in a game like that before,” Thompson said. “It was a crazy one for us.”

That set the stage for Johnson and Matthews to end it with a 24-yard pass on third down against man coverage to help San Diego State improve to 6-0 for the second time in 46 years.

“I love that matchup all day,” Johnson said. “He went up and made a spectacular play two times. I give a lot of props to him.”

The game was an offensive slog with the teams combining for 14 punts, four field goals, one fumble, one missed field goal and a turnover on downs without scoring a touchdown in regulation.

The game went to overtime when San Jose State let the clock run down and spiked the ball on third down to set up a 52-yard field goal try to Matt Mecurio with 20 seconds left.

Mecurio made kicks from 32 and 48 yards in regulation to match field goals from 52 and 26 yards by San Diego State's Matt Araiza.

Araiza was the star of the game in regulation for San Diego State, delivering an 86-yard punt in the third quarter and backing the Spartans up to their 5 with a 53-yarder late in the fourth quarter.