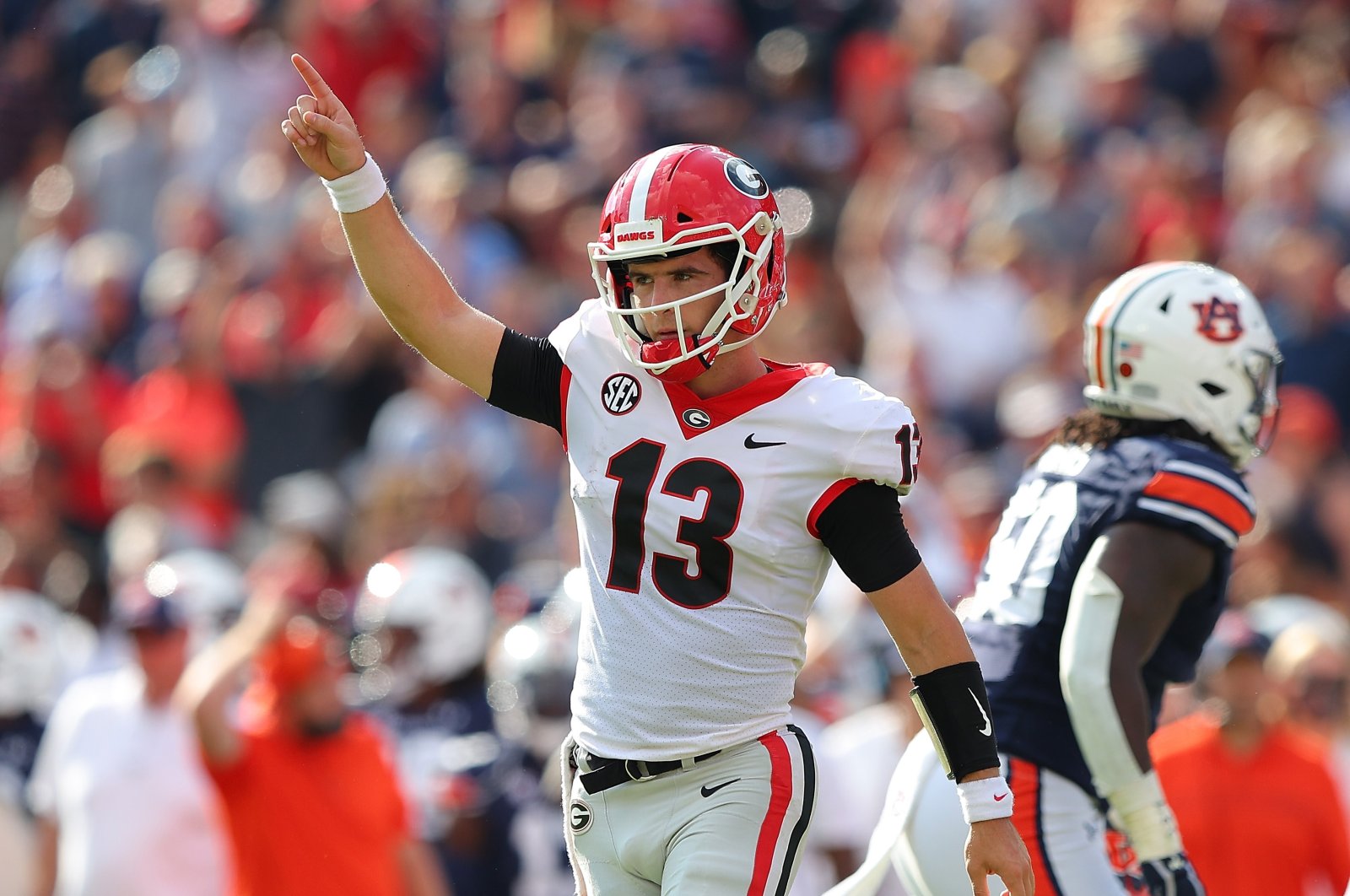 Stetson Bennett (13) of the Georgia Bulldogs reacts after a touchdown against the Auburn Tigers during the first half at Jordan-Hare Stadium, Auburn, Alabama, U.S., Oct. 9, 2021.(AFP Photo)
by ASSOCIATED PRESS
Oct 11, 2021 8:14 am

While it was no secret which team would wind up in the top spot this week, the Big Ten also made some noise by landing half of the top 10 spots, the first time the conference has ever had that many teams ranked so highly in the history of The Associated Press college football poll, which dates back to 1936.

Georgia was the new No. 1 Sunday by a unanimous vote, taking the top spot during the regular season for the first time since November 1982.

The Bulldogs (62 first-place votes) moved up one spot in the AP Top 25 presented by Regions Bank, a day after preseason No. 1 Alabama lost at Texas A&M. The defending national champion Crimson Tide slipped four spots to No. 5 after its first loss of the season.

After falling out of the rankings last week for the first time this season, the Aggies are back in at No. 21.

Alabama was one of two top-five teams to lose Saturday, opening the door for several teams to rise to rare heights.

Iowa is No 2, up one spot after winning a top-five matchup with Penn State. The Hawkeyes have their best ranking since they reached No. 1 in 1985.

No. 3 Cincinnati has its best ranking ever.

No. 4 Oklahoma moved up two spots after a come-from-behind victory against Texas in the Red River Rivalry.

The Big Ten dominates the back half of the top 10 with Ohio State at No. 6, Penn State at No. 7, Michigan at eighth and Michigan State 10th.

Oregon slipped in at No. 9. Kentucky moved up five spots to No. 11 for the Wildcats' best ranking since 2011.

The last time Georgia was No. 1 was the 2008 preseason poll, but the Bulldogs slipped after the first week of games – even though they won – and has not been back.

This is the 16th time overall the Bulldogs have held the top ranking and the first time they have been a unanimous No. 1.

Auburn dropped out of the rankings after losing for the second time this season. The Tigers were the latest team smothered by Georgia's dominant defense.

Auburn did manage to score an offensive touchdown against the Bulldogs, just the second one this season yielded by Georgia.

The only other league that has had half the top 10 in the rankings is the Southeastern Conference, which has done it 23 times, according to ESPN.

Not including last season, when some FBS teams were ineligible for the poll early in the season because their conferences were not planning on playing a fall schedule, the last time the SEC had five top-10 teams was the final regular-season poll of 2019.

No. 11 Kentucky at No. 1 Georgia. The de facto SEC East championship.

No. 12 Oklahoma State at No. 25 Texas. The Longhorns get a crack at the other undefeated Big 12 team this week after a crushing loss to Oklahoma on Saturday.