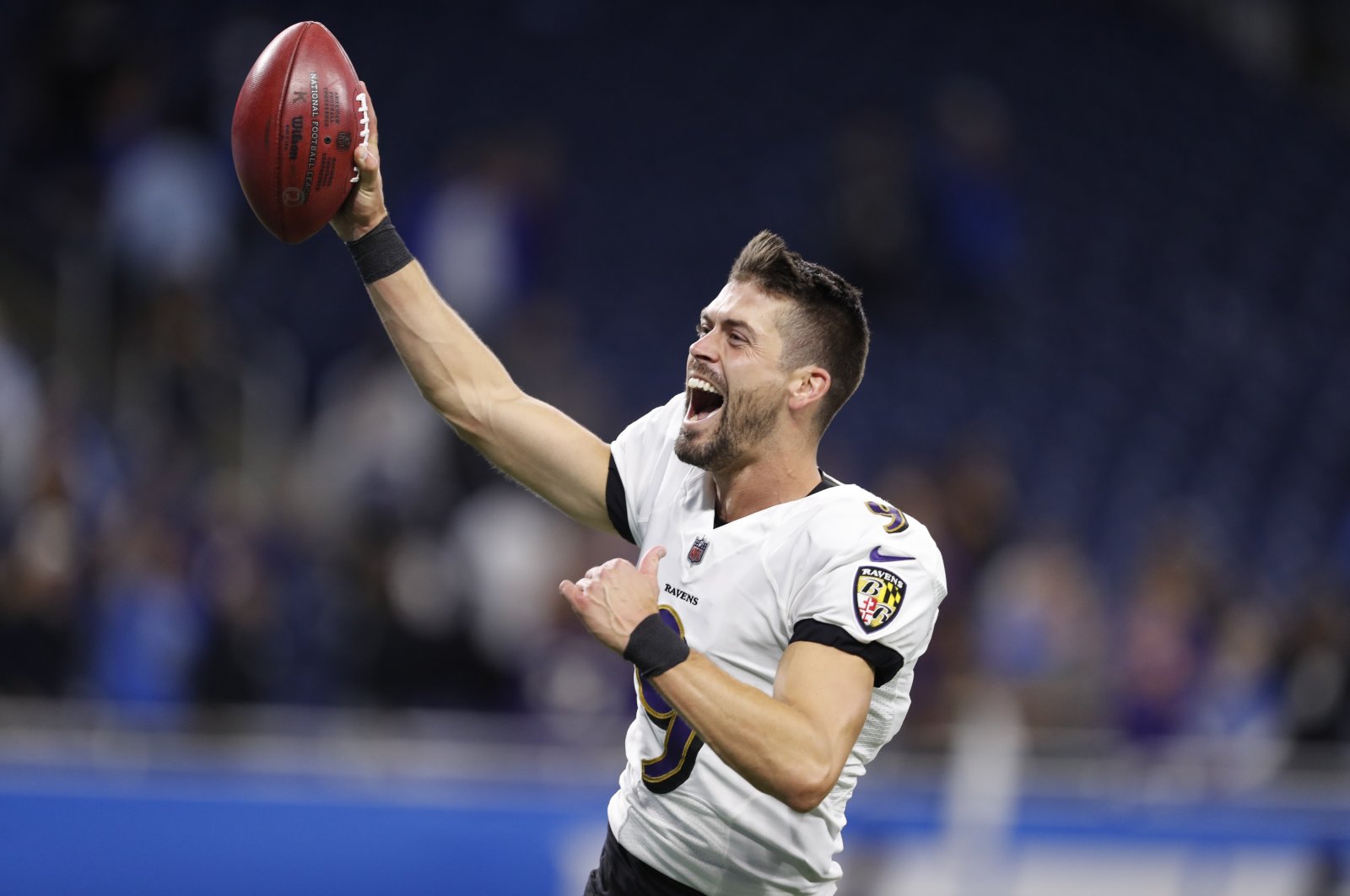 It may turn out that this is finally the season that puts the "foot" back into football in the NFL. A number of games through the first three weeks – including four alone Sunday – have rested upon kickers with ice water running through their veins to snatch victory in the waning seconds of a game, with the Baltimore Raven's Justin Tucker becoming the latest poster child for kicker heroics.

Tucker set an NFL record by making a 66-yard field goal as time expired to give Baltimore a 19-17 road win at Detroit.

Tucker's kick hit the crossbar and then bounced over it, sending Baltimore into a wild celebration and stunning the Lions. Matt Prater held the old mark of 64 yards. Prater made the kick for the Denver Broncos in 2013 against the Tennessee Titans.

Two plays before Tucker's kick, Baltimore converted a fourth-and-19 to the Detroit 48-yard line on a 36-yard pass from Lamar Jackson to Sammy Watkins. That was the Ravens' lone third-down conversion in 10 attempts. Jackson went 16-of-31 passing for 287 yards for the Ravens. He also rushed for 58 yards on seven carries.

An interception by Alohi Gillman enabled the Chargers to take possession at their 41 with 1:42 remaining. The pick was the second Los Angeles swiped from Patrick Mahomes, who suffered just his third defeat in 19 starts against AFC West opponents.

A false start took Los Angeles out of field goal range, but the Chiefs were called for pass interference on a fourth-down pass before the second of two strikes to Mike Williams resulted in a 4-yard touchdown for the decisive score. Tristan Vizcaino missed the PAT.

Herbert passed for 281 yards, going 26 of 38 with four touchdowns as the Chargers dropped the two-time defending AFC champions into last place in the West division by capitalizing on four takeaways. Three of those ended the Chiefs' first three possessions.

Mahomes went 27 of 44 for 260 yards with three touchdowns and two interceptions. He could not rally the Chiefs as their final possession ended on the Los Angeles 49. Mahomes' last three attempts fell incomplete, including a Hail Mary to end the game.

Matthew Stafford threw for four scores as Los Angeles improved to 3-0 with a win over visiting Tampa Bay.

Stafford continued to play well for the Rams since joining Los Angeles in an offseason trade, completing 27 of 38 passes for 343 yards. Stafford's favorite target was Cooper Kupp, who finished with nine receptions for 96 yards and two scores on 12 targets.

DeSean Jackson added three receptions for 120 yards, including his first touchdown as a Ram – a 75-yard score. Tom Brady finished 41 of 55 for 432 yards, with one touchdown and no interceptions.

Winston completed 13 of 21 for 128 yards and was not intercepted. Jones, the Patriots' rookie No. 1 draft choice from Alabama, completed 30 of 51 pass attempts for 270 yards and one touchdown, but P.J. Williams' interception set up a touchdown and Malcolm Jenkins had a 34-yard interception return for a touchdown for New Orleans.

Marshon Lattimore intercepted Jones' final pass of the game. Jones entered the game having completed 73.9% of his passes, but had thrown just one touchdown for the Patriots.

Aaron Rodgers set up Crosby's winning field goal with 25- and 17-yard completions to Davante Adams. It was Crosby's 26th consecutive field-goal attempt dating back to last year. Rodgers hit on 23 of 33 attempts for 261 yards with two scores. Adams caught a dozen passes for 132 yards as Green Bay moved into first place in the NFC North.

San Francisco took a 28-27 lead with 37 seconds left when Jimmy Garoppolo found Kyle Juszczyk with a 12-yard touchdown pass, capping a 75-yard drive. Garoppolo finished the game 25 of 40 for 257 yards with two touchdowns and an interception.

Kirk Cousins completed 30 of 38 passes for 323 yards and three touchdowns as Minnesota earned its first victory of the season, defeating Seattle in Minneapolis.

Alexander Mattison, playing for Dalvin Cook, who was sidelined by an ankle injury, rushed 26 times for 112 yards for the Vikings and added 59 yards on six receptions. Greg Joseph, who missed a last-second, 37-yard field goal attempt that would have given the Vikings a victory at Arizona last week, made all three of his kicks to account for all the scoring after the intermission.

The Seahawks blew a double-digit lead for the second consecutive week after losing to visiting Tennessee 33-30 in overtime the previous Sunday.

Ryan Tannehill threw three touchdown passes and Derrick Henry rushed for 113 yards as Tennessee pulled out a victory over Indianapolis in Nashville, Tennessee.

Tannehill hit Jeremy McNichols for a 10-yard scoring strike with 12:56 left in the game, followed by a two-point conversion run by Henry that gave Tennessee a 22-13 lead. After Rodrigo Blankenship made his third field goal for the Colts, a 24-yarder with 10:20 left, the Titans melted nearly 7 1/2 minutes off the clock before Randy Bullock converted the game-sealing 32-yard field goal with 2:58 remaining.

Tannehill completed 18 of 27 passes for Tennessee, which possessed the ball for just over 34 minutes and outgained Indianapolis 368-265.

Kyler Murray passed for 316 yards and cornerback Byron Murphy had two interceptions, one returned for a touchdown, to lead unbeaten Arizona over host Jacksonville.

Murray rushed for a touchdown and completed 28 of 34 pass attempts with no touchdowns and an interception for Arizona. Christian Kirk finished with seven receptions for 104 yards and A.J. Green had five catches for 112 yards.

The game included a play tied for the longest in NFL history. When Matt Prater's 68-yard field goal attempt as time expired in the first half fell short, Jamal Agnew fielded the ball in the end zone and made a 109-yard return for a touchdown.

Kareem Hunt had 155 yards from scrimmage and a touchdown, Myles Garrett recorded 4.5 sacks and Cleveland pulled away for a win over visiting Chicago.

Baker Mayfield completed 19 of 31 passes for 246 yards for Cleveland, which won its second game in a row after dropping its season opener against the Kansas City Chiefs. The Browns tallied nine sacks as part of a dominant defensive effort.

Facing frequent duress in his first career start, Bears rookie Justin Fields completed only 6 of 20 passes for 68 yards. The Bears were credited with only 1 yard passing – due to the lost yardage on those nine takedowns of Fields – and 47 total yards on 42 offensive plays.

Koo gave the Falcons their first win after they rallied from a 14-7 deficit in the final 12-plus minutes. His kick easily cleared the uprights and sent the Giants to an 0-3 start and their second straight loss decided by a game-winning field goal at the buzzer.

Matt Ryan completed 27 of 36 passes for 243 yards and two touchdowns. He was 9-for-10 on Atlanta's game-tying drive when the Falcons went 4-for-4 on third-down conversions. Ryan threw the 350th and 351st touchdowns of his career. He connected on a 4-yard touchdown to Olamide Zaccheaus shortly before halftime and a 1-yard score to Lee Smith with 4:13 remaining.

Josh Allen passed for 358 yards and four touchdowns and also rushed for a score to help Buffalo notch an easy victory over Washington at Orchard Park, New York.

Emmanuel Sanders caught two touchdown passes and Dawson Knox and Zack Moss hauled in a score apiece for Buffalo. The Bills have outscored opponents 78-21 in back-to-back victories since losing at home to the Steelers in Week 1.

Joe Burrow and Ja'Marr Chase hooked up for a pair of touchdowns and visiting Cincinnati knocked off beat-up Pittsburgh 24-10 at Heinz Field.

Wilson, the No. 2 overall pick in last spring's NFL Draft, endured a second consecutive miserable game against a defense able to pressure him with consistency. He completed 19 of 35 passes for 160 yards with two interceptions and was sacked five times.

New York (0-3) managed just 43 yards on the ground and finished the day with just 162 total yards. It hasn't scored a touchdown since the fourth quarter of its Week 1 loss at Carolina.

The Raiders recorded their first 3-0 start since 2002. Raiders running back Peyton Barber rushed for a career-high 111 yards and one score.