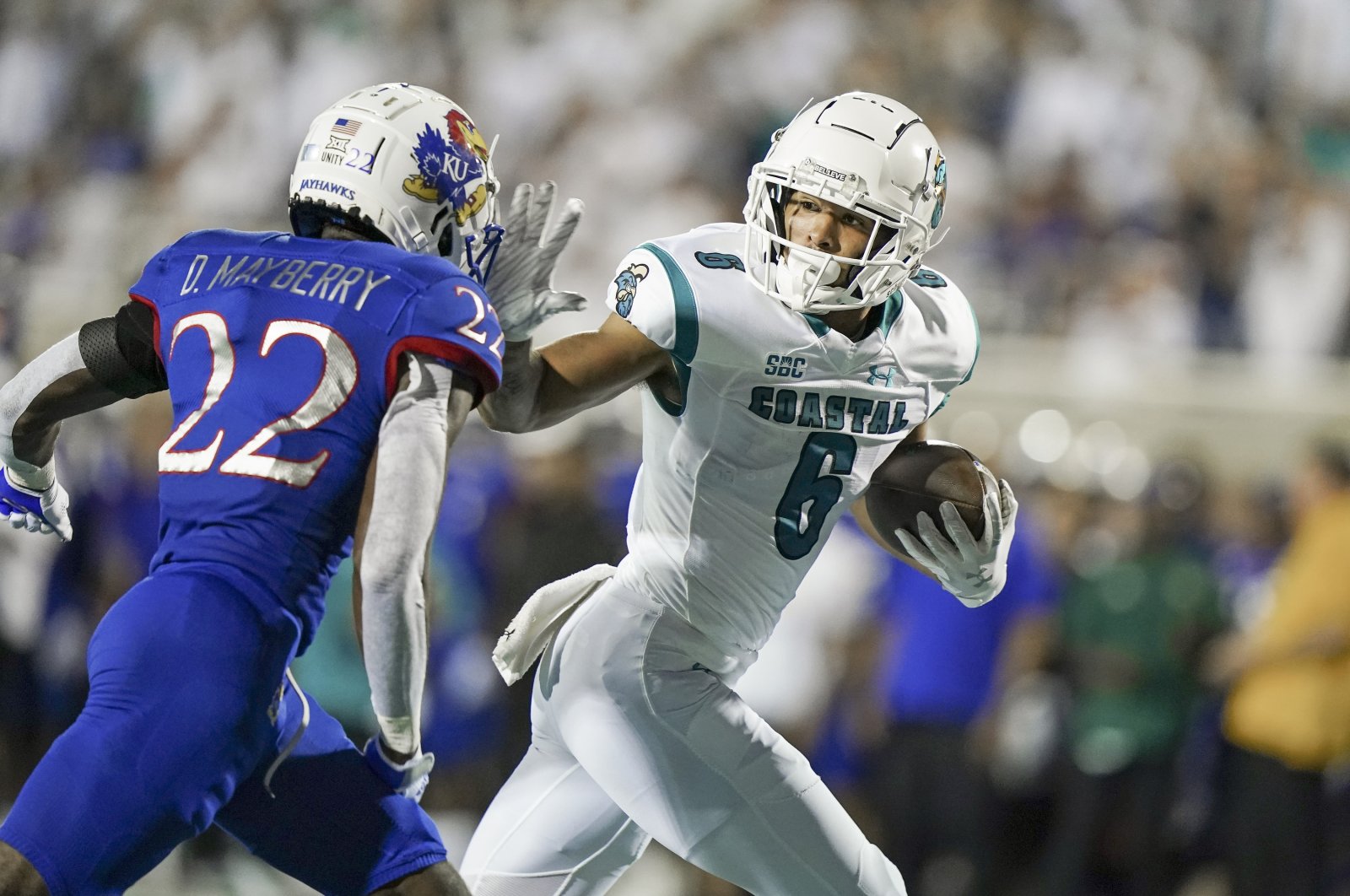 After breaking into the AP-Top Ten college football rankings at No. 9 during the 2020 season, finishing ranked at No. 14 and then opening 2021 ranked in a Top-25 preseason poll for the first time in school history, Reese White was thinking even bigger for No. 17 Coastal Carolina after his strong start to the season.

White finished with 102 yards and three rushing touchdowns and the Chanticleers beat Kansas for a third straight year, 49-22, as the fledging FBS program hosted a Power Five team for the first time Friday night.

White is a junior who was a backup behind last year's rushing leader, C.J. Marable, during Coastal's breakthrough season in college football's top division.

So far, White is filling in very nicely. He had two rushing touchdowns in a 52-14 victory over The Citadel last week and wondered if he couldn't do even better.

How about his first-ever 100-yard performance and those three critical TDs.

So is four on the table when Coastal Carolina travels to play Buffalo next week?

Quarterback Grayson McCall threw for two scores and ran for a third in the victory.

It was a big spot for a program on the rise and Kansas (1-1) didn't have the firepower to spoil the home team's “White Out” promotion in front of the largest crowd here ever at 17,697.

“I never imagined this could happen,” said freshman defensive tackle Josiah Stewart, who set a team record with 3 1/2 sacks. “It's unreal.”

Much like the Chanticleers' wins at Kansas the last two years that certainly raised eyebrows, this one wasn't much of a shocker as Coastal Carolina showed off a deep, talented offense and a relentless defense to put away its Big 12 Conference opponent.

White had touchdown runs of 2, 19 and 3 yards against Kansas after two touchdowns in his team's 52-14 opening victory over The Citadel last week. McCall began the scoring with a 33-yard TD pass to Jaivon Heiligh, then had a 2-yard scoring run.

White talked this week of going for three touchdowns after his two a week ago.

Kansas quarterback Jason Bean, a North Texas transfer, had touchdown runs of 34 and 46 yards as the Jayhawks drew to 28-22 midway through the third quarter.

However, the Chants responded with White's final two touchdowns to open up a 20-point lead.

Kansas entered after snapping a 13-game losing streak in the opener and hoped to keep the momentum going on Coastal's teal blue turf.

But the Chanticleers and McCall proved too potent for first-year Jayhawks coach Lance Leipold's program. They scored on three of their first four possessions and got a blocked punt for a TD by Alex Spillum to take a 28-9 lead.

McCall finished 17-of-21 passing for 245 yards. Heiligh had six catches for 122 yards, his fourth consecutive game with 100-plus receiving yards.

Spillum, a speedy, 6-foot-2, 190-pound safety, blew through the line to block the punt deep in Kansas territory. He followed the ball into the end zone and covered up for the score.

About the only mistake Coastal Carolina made was exuberance. What looked like an interception by cornerback D'Jordan Strong was celebrated wildly by Coastal's players. An unsportsmanlike conduct flag few for excessive celebration and, when the pick was overturned on review, Kansas had the ball back and a first down.

The Jayhawks continued on a 66-yard touchdown drive for their last lead, 9-7.

“Our margin of error is very small right now. I think that's pretty evident,” Leipold said. “We had some moments where we were knocking on the door, but just couldn't quite get over the hump.”

Kansas: The best thing for the Jayhawks? Coastal Carolina comes off the schedule after beating Kansas the past three years. The Chants figured to be an easy takedown when the games were made, but Coastal turned this into a one-sided contest.

Coastal Carolina: The Chanticleers have an offense that has looked unstoppable through two games. McCall leads the way with NFL-caliber receivers like tight end Isaiah Likely and receiver Heiligh catching everything thrown their way. White has stabilized things at tailback in place of last year's top rusher, C.J. Marable.