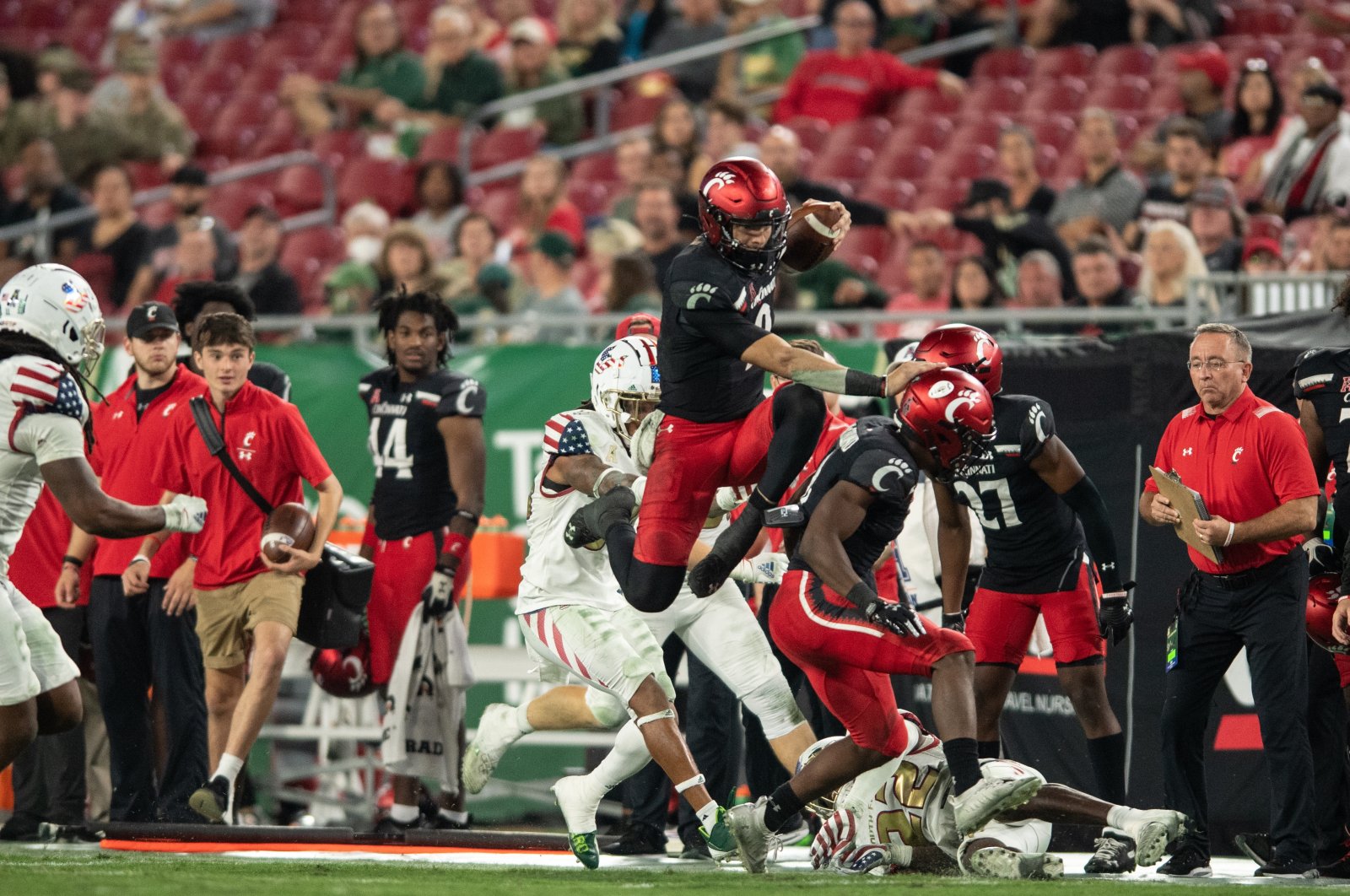 The Cincinnati Bearcats continue to win, but even a 17-point victory over the University of South Florida is unlikely to earn them any style points from the College Football Playoff (CFP) committee, who will do everything they can to ensure a non-Power Five team doesn't get a chance to compete on the biggest stage.

Desmond Ridder threw two touchdown passes to break the Cincinnati career record and ran for a score to help the No. 2 Bearcats beat South Florida 45-28 on Friday night.

Cincinnati (10-0, 6-0 American Athletic, No. 5 CFP), one of four unbeaten FBS teams, has started the season with 10 consecutive wins for just the second time in school history. The Bearcats also did it in 2009, when they got off to a 12-0 start.

Ridder broke the school record with this 79th touchdown pass, a 21-yard strike to Josh Whyle early in the third that made it 31-7. Gino Guidugli, now Cincinnati’s quarterbacks coach and passing game coordinator, had 78 scoring passes from 2001-04.

“Something special, man,” Guidugli said. “He's earned that. It just makes it that much more special if your record is going to broken, I'm extremely happy for him. I love him like a son.”

Ridder completed 31 of 39 passes for 304 yards, and ran for 65 yards on 13 carries. He brought the record-breaking ball to his postgame media session.

“I told everyone in the locker room that this ball and this record wasn't just me,” Ridder said.

The Bearcats played without running back Jerome Ford due to a leg injury that happened during last week against Tulsa. Ford has 888 yards and 15 rushing touchdowns.

Jaren Mangham had two rushing TDs for South Florida (2-8, 1-5), which has lost 19 consecutive games against teams ranked in the top 20 since upsetting Notre Dame on the road in October 2011. He has 15 touchdowns on the ground this season, tied for second-most in USF history.

“We're not a good enough team right now to kind of turn it on and turn if off,” USF coach Jeff Scott said. “I'm proud of how this group continues to fight, continues to play, and eventually that's going to pay off.”

Ridder had a 13-yard TD run, connected on a 1-yard scoring strike to Tre Tucker, and Alex Bales made a 27-yard field goal during the second quarter as the Bearcats took a 24-7 lead.

After turning the ball over on its first and fourth plays on offense, Cincinnati tied it at 7 when Ryan Montgomery scored on a 12-yard dash with 2:57 left in the first. He had a 55-yard TD run with just over a minute remaining and finished with 72 yards on six carries.

USF took a 7-0 lead midway through the opening quarter when Mangham had a 2-yard TD run.

Cincinnati: Had several costly first-half penalties, including an offside call that gave USF a first down in a punting situation, and an ineligible receiver downfield that negated a Ridder TD pass. The Bearcats struggled to close out the win, allowing three long second-half scoring drives and losing a fumble at USF 1 early in the fourth.

“That's what keeps me laying awake at night, is just finding ways to finish things off,” Fickell said. "That's where we've got to go if we want to be great.”

USF: Had periods of success against a top-20 team for the second straight week. The Bulls lost 54-42 to then No. 20 Houston last week.

Cincinnati will remain near the top in the AP poll but it remains to be seen how the voters will look at the relatively close win over USF.