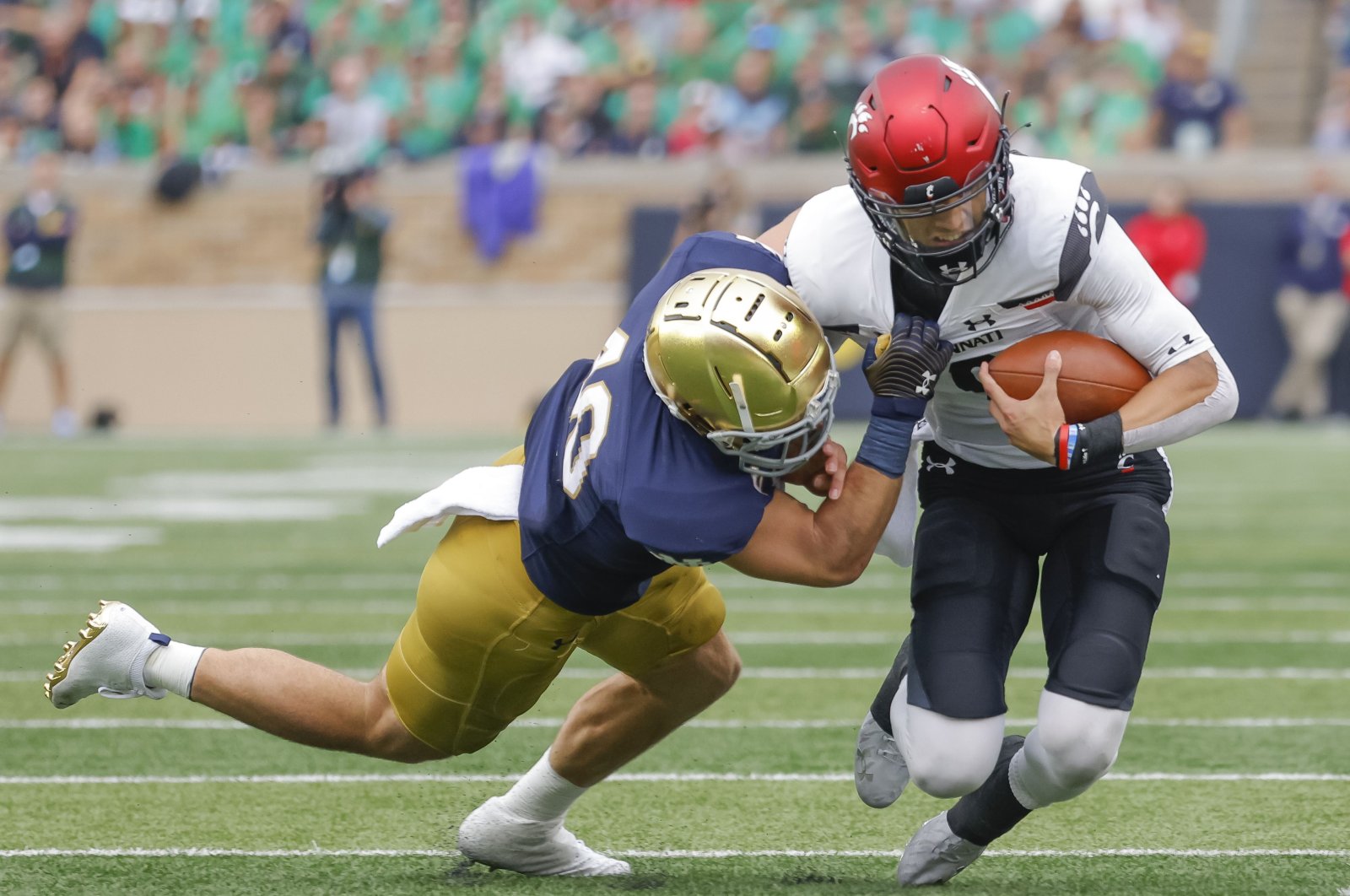 Drew White (40) of the Notre Dame Fighting Irish tries to make the stop on Desmond Ridder (9) of the Cincinnati Bearcats during the second half at Notre Dame Stadium, South Bend, Indiana, U.S., Oct. 2, 2021. (AFP Photo)
by ASSOCIATED PRESS Oct 03, 2021 9:17 am
RECOMMENDED

If the Cincinnati Bearcats finish the remainder of the season without a hitch, they will be sure to highlight Saturday's performance against one of college football's most storied programs as evidence that they deserve a shot at the national championship.

The last pass of the day by Desmond Ridder was a celebratory heave way up into stands toward the Cincinnati fans who came to Notre Dame to see their Bearcats make a statement.

Cincinnati wanted to use the first top-10, regular-season matchup in program history as a chance to show it belongs among the nation's best before heading into its American Athletic Conference schedule.

Ridder threw two touchdown passes and ran for score late in the fourth quarter as No. 7 Cincinnati capitalized on its big opportunity and beat No. 9 Notre Dame 24-13 on Saturday in a game the Bearcats hope can be the centerpiece of a College Football Playoff resume.

No team from outside the Power Five conferences has reached the playoff in its seven seasons. Never even came close.

To break that barrier, the Bearcats almost certainly need to go undefeated and this trip to Notre Dame (4-1) looked like the toughest test on their schedule. Not to mention the grandest stage they'll appear on this season.

“It’s still midseason so we got a lot of games left to play, but it obviously is a big win against a top-10 team,” Ridder said. “Hopefully, we keep this going.”

The Bearcats were not quite dominant, but they were plenty good enough in their first trip to South Bend since 1900 to snap Notre Dame's 26-game home winning streak.

“I don't think we let the stage get too big for us,” Ridder said.

When told by coaches how loud the crowd can be at Notre Stadium this week, Ridder quipped that it wouldn't be for long.

Cincinnati took advantage of three turnovers by Notre Dame in the first half to jump out to 17-0 lead. The miscues by the Irish were killers.

Ahmad Gardner picked off an ill-advised throw under pressure by Jack Coan that ended Notre Dame's first and best drive of the half.

DeShawn Pace's interception of Notre Dame freshman Tyler Buchner set up Cincinnati in the red zone and Ridder flipped a 1-yard pass to Taylor to make it 7-0 early in the second quarter.

Chris Tyree fumbled the ensuing kickoff back to Cincinnati and the Bearcats turned that into a 23-yard field goal by Cole Smith.

Ridder and the Bearcats put together their best first-half drive late in the second quarter, going 80 yards for a touchdown. Ridder found Tre Tucker for a 27-yard score that beat Irish All-America safety Kyle Hamilton.

The Bearcats were up 17-0 with 40 seconds left in the first half and for the third time Cincinnati fans, decked in red in the upper reaches of the south end zone, were chanting “Let's Go Bearcats!”

After the postgame celebration died down, Ridder belted out a “How ’bout them Bearcats!” when he entered the interview room and talked about how it “sounded like a home game.”

The Bearcats waved their giant black and red flags and Lambeau-leaped over the wall behind the corner of the end zone to take selfies with their fans.

Cincinnati: The defense locked up Notre Dame most of the way, getting a shut-down game from All-America cornerback Gardner and good pressure from Myjai Sanders and Darrian Beavers.

Cincinnati's former defensive coordinator Marcus Freeman was on the other sideline, directing Notre Dame's defense, but the Bearcats showed that they're still plenty feisty without him.

“Show them that we're still the same defense whether he's calling the shots or not,” defensive lineman Malik Vann said.

Notre Dame: Drew Pyne, who took over last week in the second half against Wisconsin when Jack Coan went out with an ankle injury, came off the bench in the third quarter again for the Irish – this time just to provide a spark.

Pyne was OK, showing some Ian Book-ish mobility and getting rid of the ball a little more quickly than Coan. The sophomore was 9 for 22 for 143 yards and his 32-yard touchdown pass to Braden Lenzy with 8:20 left in the fourth quarter cut the lead to 17-13. Jonathan Doerer missed the point after.

“Clearly, we can’t continue down this road of who’s the flavor of the week here,” Irish coach Brian Kelly said of his quarterbacks. “We’re going to have to sit down and figure this out.”