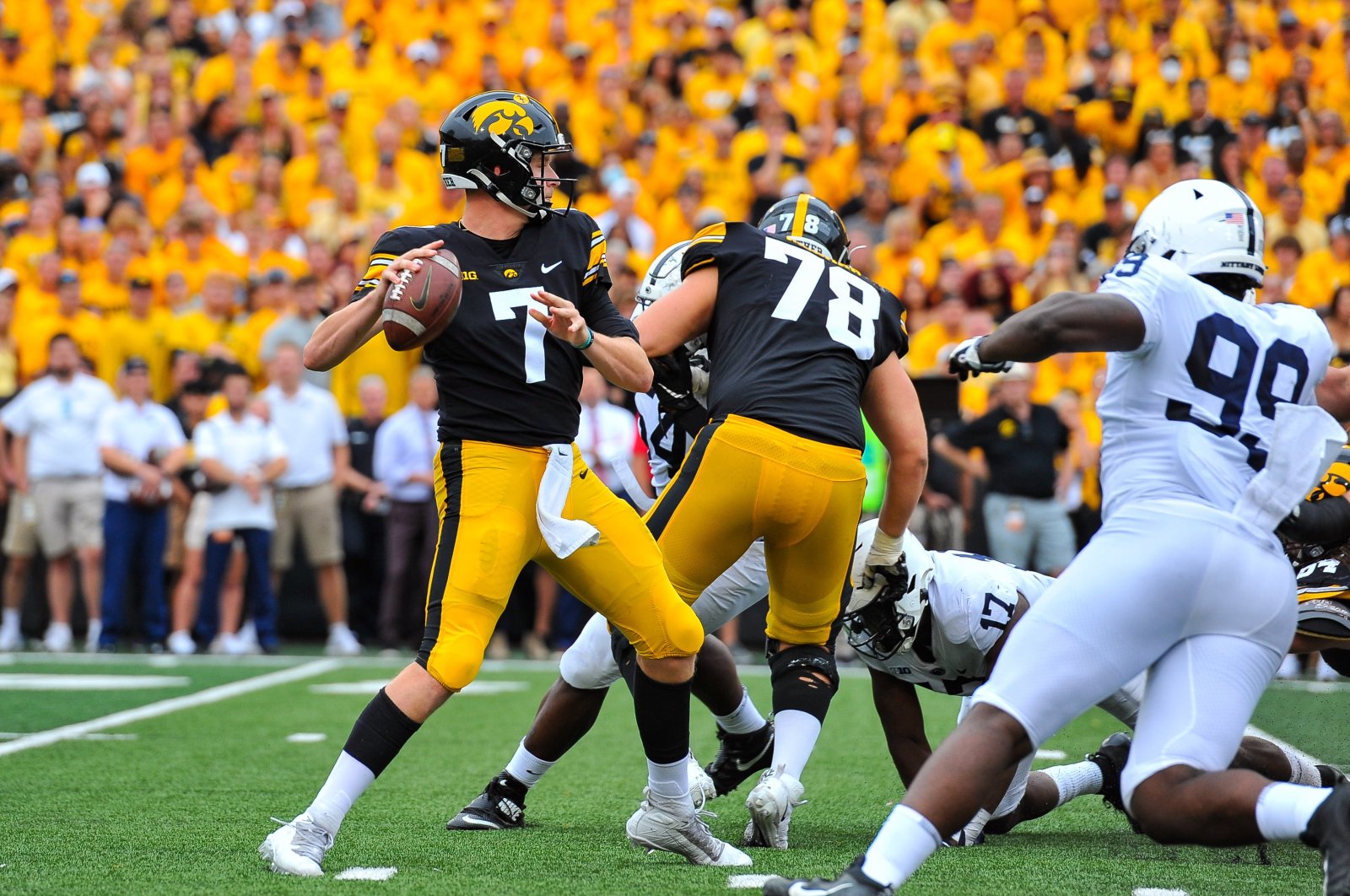 No. 4 Penn State lost quarterback Sam Clifford to injury in the second quarter and the Nittany Lions were unable to hold on to their two-touchdown lead as No. 3 Iowa slowly chipped away to emerge 23-20 victors as dusk settled over Kinnick Stadium.

Spencer Petras threw a 44-yard touchdown pass to Nico Ragaini to complete Iowa’s comeback, and the Hawkeyes (6-0, 3-0) took control of the Big Ten West with their 12th straight victory and thrust themselves into the College Football Playoff (CFP) conversation.

“This was like the biggest of the big-time, which was pretty awesome,” Ragaini said. "You don’t get moments like this every day, taking advantage of the opportunity. It was a mentally draining game for sure, and physically draining.

“On the sideline I was so emotionally drained that I almost teared up out there because we care about each other so much. We all want each other to succeed.”

An hour after the game, Ferentz choked up as he reflected on his players' locker room celebration.

Penn State (5-1, 2-1) lost for the first time in 10 games and headed back to Happy Valley with a list of injuries that could make its path through the rest of the season difficult.

“It's just a bump in the road,” Lions defensive end Arnole Ebiketie said. “We have to get better.”

The Hawkeyes' grinding offense isn't built to play from behind, but it managed to come back in the biggest game at Kinnick Stadium since then-No. 1 Iowa beat then-No. 2 Michigan in 1985.

Iowa won the field-position battle thanks to the work of punter Tory Taylor, who repeatedly pinned Penn State deep in its own end after Clifford went out in the second quarter.

Iowa chipped away with field goals by Caleb Shudak to cut it to 20-16. The winning play came on the first play after the Hawkeyes got the ball at the Penn State 44 with 6:35 left.

Petras rolled to his right and found Ragaini alone on the left side. Linebacker Curtis Jacobs knocked him out of bounds, but not before he got the ball over the goal line. All-America center Tyler Linderbaum was the first man to greet him in the end zone.

Penn State coach James Franklin didn't disclose the nature of Clifford's injury. He was hurt with the Lions leading 17-3 when he took a big hit from linebacker Jack Campbell, and he was out of uniform on the sideline in the second half.

After Ta'Quan Roberson took over for Clifford in the middle of the second quarter, Penn State managed just 50 yards on 46 plays the rest of the way.

Five of Roberson's series started inside the Penn State 10, and a sixth began at the 11. The sellout crowd of 70,000 had a major impact when the Lions were in their own end, their roars forcing numerous false starts as Roberson's claps for the snap went unheard by his linemen.

On the Nittany Lions' last three possessions, they turned over the ball on downs, Matt Hankins came up with Iowa's fourth interception of the game and they turned it over on downs again.

“We weren't counting on the interceptions but that was a great job there," Ferntz said. “We played physical, knocked their quarterback out – hope he's fine. That's the team we have.”

Penn State: Franklin did not disclose the nature of Clifford's injury. The Lions also lost a couple of key defensive players. P.J. Mustipher, their 326-pound run stopper, went out less than two minutes after kickoff with a left knee injury and didn’t return. Neither did safety Jonathan Sutherland, who left in the second quarter with an undisclosed injury.

Iowa: It continues to be all about defense with this team. The offense responded when it had to in the second half, but defense was special throughout. Four more interceptions gave the Hawkeyes a nation-leading 16. The only sour note was an injury to cornerback Riley Moss, who appeared to injure his left knee after an interception.

Knocking off the ranked

Iowa beat a Top 25 team for the third time this season and has won six in a row against ranked opponents for the first time since 1960. It was Iowa's first win over a top-five team since beating then-No. 3 Ohio State in 2017.