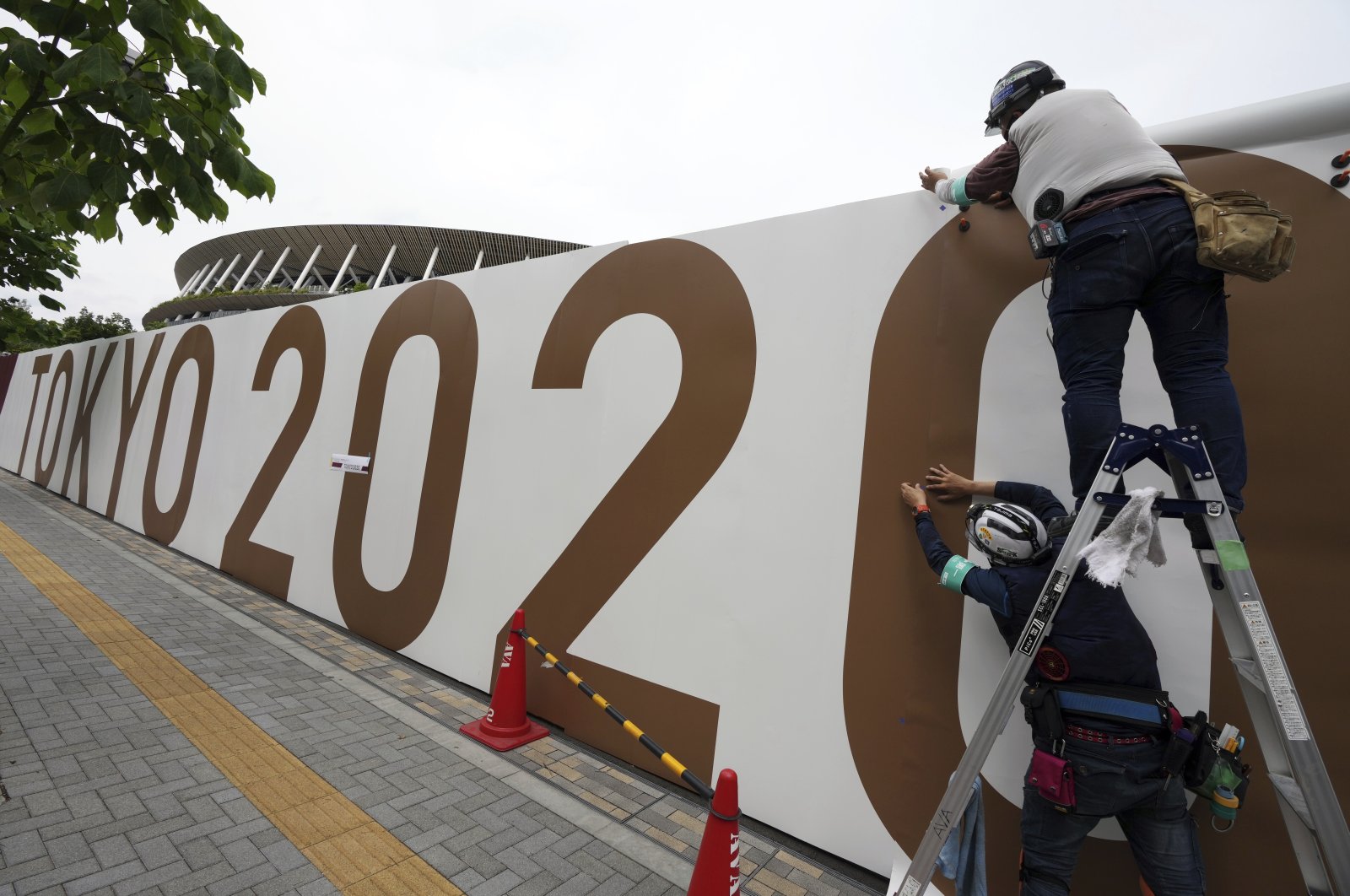 Workers paste the overlay on the wall of the National Stadium, where the opening ceremony and many other events are scheduled for the Tokyo 2020 Olympics, Tokyo, Japan, June 2, 2021. (AP Photo)
by French Press Agency - AFP Jun 03, 2021 12:34 pm
RECOMMENDED

The Tokyo Olympics chief Seiko Hashimoto on Thursday reassured that the Olympics were 100% certain to go ahead despite 10,000 volunteers quitting over coronavirus fears, a sexism row and scheduling problems. She also warned that a major outbreak mid-Games could slam the door shut on fans.

Hashimoto made the comments exactly 50 days before the pandemic-postponed Olympics, which remain plagued by public opposition.

"I believe that the possibility of these Games going on is 100 percent that we will do this," Hashimoto told BBC Sport, adding that fans could be locked out during the Games.

"The biggest challenge will be how we can control and manage the flow of people," she said.

"If an outbreak should happen during the Games times that amounts to a crisis or an emergency situation then I believe we must be prepared to have these Games without any spectators."

Overseas fans have already been barred, and a decision on whether to allow domestic spectators is expected after Tokyo's coronavirus state of emergency ends on June 20.

Despite the lingering uncertainty, organizers marked 50 days to the July 23 opening ceremony by revealing details of the medal ceremonies, including podiums made with recycled plastic. They also released the victory music for the gold medallists.

"We have 50 days left. I feel like I can hear the sound of the athletes' footsteps heading to Tokyo," Hashimoto said at the ceremony in the Ariake arena, a Games venue.

"We're fully ready and prepared with infection prevention measures, so please feel safe and reassured coming to Japan," she added.

"And for Japan to feel safe in welcoming you, I ask you, all the athletes, to be responsible with your actions, to follow the rules."

Japan has seen a smaller COVID-19 outbreak than many countries, with just over 13,000 deaths. Around 3% of the population has been fully vaccinated.

But organizers face persistent domestic opposition, with around 80% of people in national polls backing a further delay or cancellation.

Hashimoto earlier told Japan's Nikkan Sports daily that postponement was not an option, and cancellation was virtually inconceivable.

"If various countries around the world experience very serious situations, and delegations from most countries can't come, then we wouldn't be able to hold it," she said.

"But conversely, unless such a situation emerges, the Games will not be canceled."

Organizers confirmed Thursday that around 10,000 of the 80,000 Games volunteers had quit – many over coronavirus concerns, according to Tokyo 2020 CEO Toshiro Muto, as well as for scheduling or other logistical reasons.

Some also dropped out in protest at sexist remarks by Hashimoto's predecessor, who was forced to resign in February after saying women talk too much in meetings.

Organizers have said the reduction in volunteers will not affect the Games because the event has been scaled back.

As well as the ban on non-domestic fans, the number of overseas officials and participants has been cut by about half, to around 78,000, with calls for further reductions.

Olympic officials are looking to build positive momentum as the Games draw nearer, with Australia's softball team this week becoming the first athletes to arrive in Japan.

But in a sign of the challenges ahead, a member of Ghana's Under-24 Olympic football team tested positive upon arriving for a friendly late on Wednesday, the Japan Football Association said.

All of Ghana's team, who will play Japan's U-24s on Saturday, had tested negative in the 72 hours before their departure.

Japanese swimmer Daiya Seto said Hashimoto's comments had given him confidence for the final stage of his preparations.

"Hashimoto said that the Games wouldn't be canceled or postponed. As an athlete, if you believe that they're going to go ahead, then you can prepare for it in the best way possible," he said.

"I want to make the most of the 50 days I have left, so that I can do myself justice when I race."