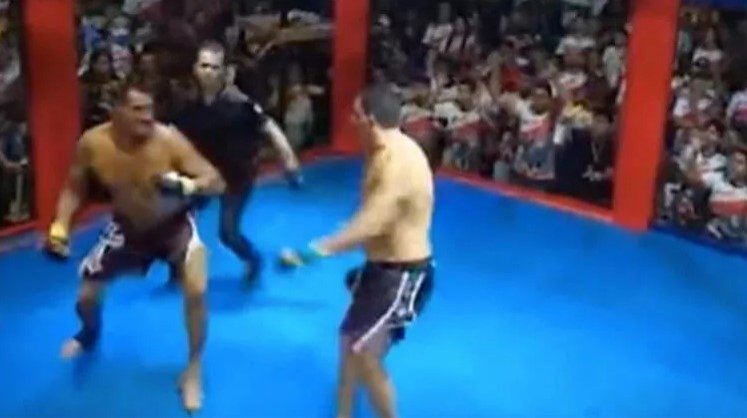 Simao Peixoto, the mayor of a small Brazilian city, has made headlines after he settled a political score with an ex-councilman in a cage match, taking polarizing politics to a new level.

Peixoto, mayor of the Brazilian Amazon municipality of Borba, has had a long-running beef with former city councilman Erineu "Mirico" da Silva.

The final straw, according to local media reports, came when Da Silva posted a video criticizing Peixoto's management of the Balneario do Lira, a river-beach resort that is the municipality's main tourist attraction.

When Da Silva made a video threatening the mayor with a "beat-down," Peixoto, 39, fired back with a challenge: A mixed martial arts fight in a regulation octagon, complete with referee and fans, according to the Diario do Nordeste.

The three-round bout was held in the early hours of Sunday in the town's sports center, with a large, rowdy crowd egging the two rivals on.

Peixoto, an MMA fan fond of appearing in political ads with his grappling gloves on, entered the ring stamping on the mat and making a throat-slitting gesture in Da Silva's direction, a video of the fight posted online showed.

The two shirtless men wasted no time lunging at each other but appeared to tire quickly.

Da Silva managed to take the mayor down twice – once with an early right jab, once with a third-round leg sweep – but the judges declared Peixoto the winner.

The pair looked to have exhausted their animosity by the end of the bout, exchanging a good-natured embrace.

Peixoto reportedly said afterward the event was to promote sports. It was also for charity, with the audience asked to donate food for the needy.

But some weren't amused.

The Amazonas state health regulator said it would demand an explanation from the city for allowing an indoor crowd of unmasked fans, violating COVID-19 social distancing rules.

Others criticized the men for turning Brazil's already polarized politics into a literal cage fight.

"There were only losers in this fight – including healthy public debate and above all, voters," wrote news magazine Veja.

But some Brazilians called for more of the same, in a country that appears headed toward a nasty election showdown next October between far-right President Jair Bolsonaro and his nemesis, leftist former President Luiz Inacio Lula da Silva.

"Can you imagine Bolsonaro and Lula getting in the ring no holds barred, mind you," quipped one Twitter user.