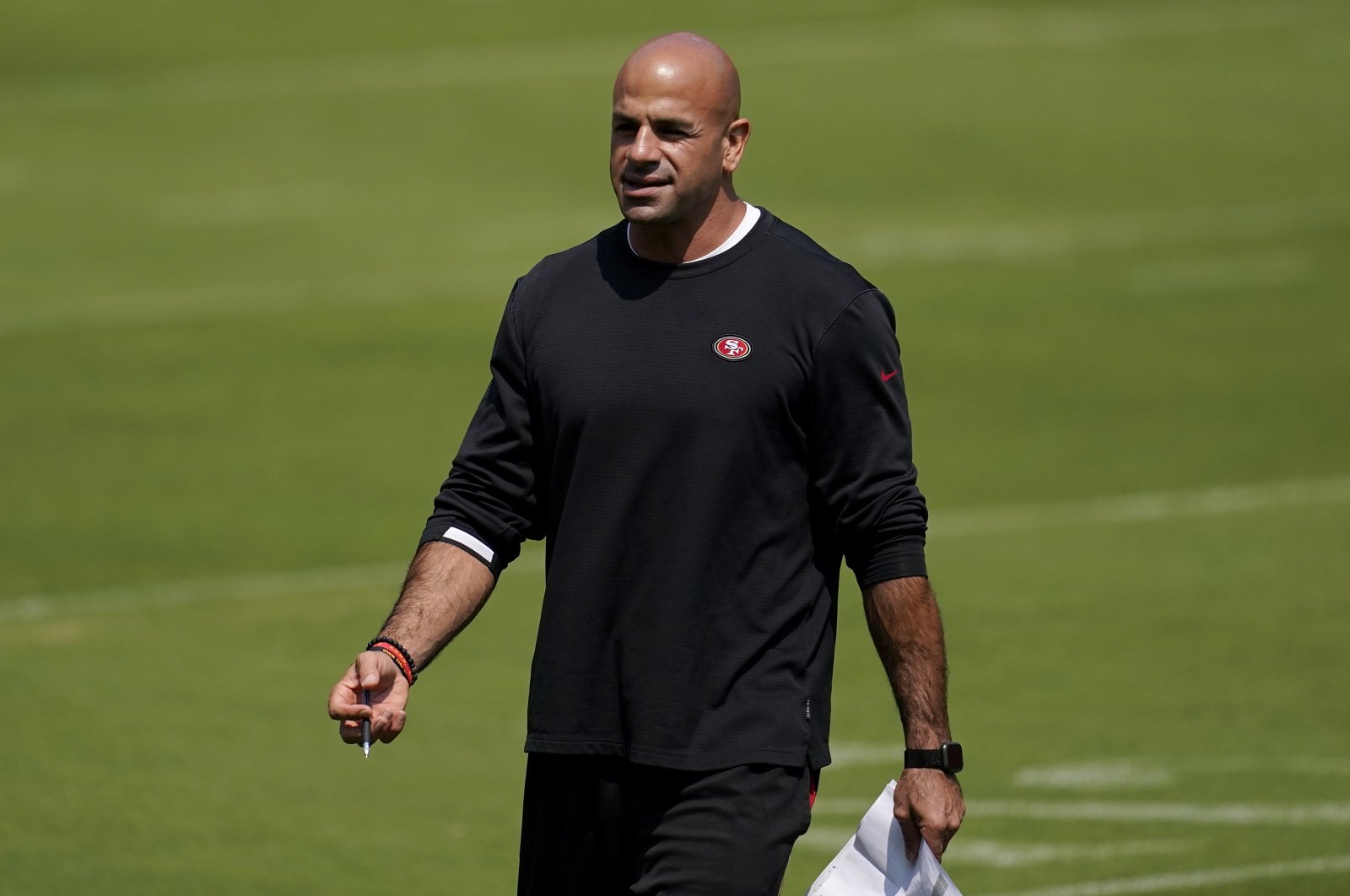 Robert Saleh has made history that extends far beyond any football field. The New York Jets' new head coach has families and community leaders excited in neighborhoods all across the country, celebrating the first known Muslim American to hold that position in the NFL. That's a source of great pride for a group that has been generally underrepresented in the league's on-field leadership roles.

"It’s something that shows the growing diversity of our nation, the inclusion we’re trying to achieve at all levels of our society,” said Ibrahim Hooper, national communications director for the Council on American-Islamic Relations (CAIR). "And I think it's a very positive sign.” The 41-year-old Saleh, expected to be formally introduced next week by the Jets, is the son of Lebanese parents and grew up in the Detroit suburb of Dearborn, Michigan, which is home to the largest Muslim population in the United States per capita. "I think he’s just a trailblazer for a lot of coaches who are Muslim, to let them know that they do have a chance to be a head coach,” said Lions offensive lineman Oday Aboushi, a practicing Muslim who has played in the NFL for eight seasons – including his first two with the Jets. "He shows them you do have a chance to be a defensive coordinator, you do have a chance to grow up and have a job at the professional level,” Aboushi added.

"As long as you’re professional and you’re passionate about it like he is, I think a lot of people will look to him as a trailblazer, as far as everyone feeling like they could do it themselves and it’s an attainable dream.”

After Saleh's college playing career as a tight end at Northern Michigan ended, he got his start in coaching by working as an assistant at Michigan State, Central Michigan and Georgia before being hired as a defensive intern by the Houston Texans in 2005. Then came stints with Seattle and Jacksonville before Saleh became San Francisco’s defensive coordinator in 2017, helping the 49ers reach the Super Bowl last year with his No. 2-ranked unit. He was a popular candidate among the seven teams looking for a new coach this offseason, and quickly emerged as the favorite for the Jets job.

Saleh, known for his energy on the sideline and being well-liked by players, impressed the Jets during his first remote interview. He was flown in a few days later for an in-person meeting with Jets chairman and CEO Christopher Johnson, president Hymie Elhai and general manager Joe Douglas at the team's facility in Florham Park, New Jersey. After a two-day visit, Saleh left to meet with Philadelphia for its coaching vacancy – but the Jets knew they found their new coach. The team announced Thursday night the sides reached an agreement in principle.

"As a pioneer in the sports world, Saleh will serve as an inspiration to many young American Muslims,” Selaedin Maksut, the executive director of CAIR's New Jersey chapter, said in an email to The Associated Press. "In addition to the positive impact that he’ll have on Muslims, Saleh’s presence in the field and on the screen will remind the rest of America that Muslims are a part of the fabric of this nation and proudly contribute to society. It’s a step toward tearing down walls and building bridges. "Welcome to Jersey, brother!” Ahmed Mohamed, the legal director of CAIR's New York chapter, congratulated the Jets and Saleh for what he called a "historic hiring in the National Football League.”

He's optimistic it's a sign of increasing inclusion and recognition of the Muslim community. "For all the Muslim youth who may be told they don’t belong or can’t do something because of how they pray, we hope that when they see Mr. Saleh on national television, they will say to themselves that anything is possible and will reach for the stars," Mohamed said in an email to the AP. "We hope Mr. Saleh’s hiring opens the door for other American Muslims in sports.” Saleh is believed to be the third Arab American to become a head coach in the NFL.

He follows Abe Gibron, who led Chicago from 1972-74, and Rich Kotite, who coached the Eagles (1991-94) and Jets (1995-96) – both of whom also had Lebanese roots. Saleh is also just the fourth active NFL head coach who is a minority, joining Miami's Brian Flores, Washington's Ron Rivera and Pittsburgh's Mike Tomlin. "Robert Saleh has made history on the field and off,” New York City Mayor Bill de Blasio tweeted Friday night.

"Now he’s knocking down barriers in our own backyard. Congrats, Coach!” While Saleh's focus will be on restoring the Jets to respectability and not necessarily being an inspiration, he has provided a path for others to someday follow. "Any person in a new job, their first goal is going to be performance in their job,” Hooper said. "But I think a secondary consideration might be being an example to Muslim and Arab American youth around the country, that this kind of inclusion and respect for diversity is possible.

"But I don’t think he got the job because of his ethnic or religious background. He got this job because he’s good at what he does.”