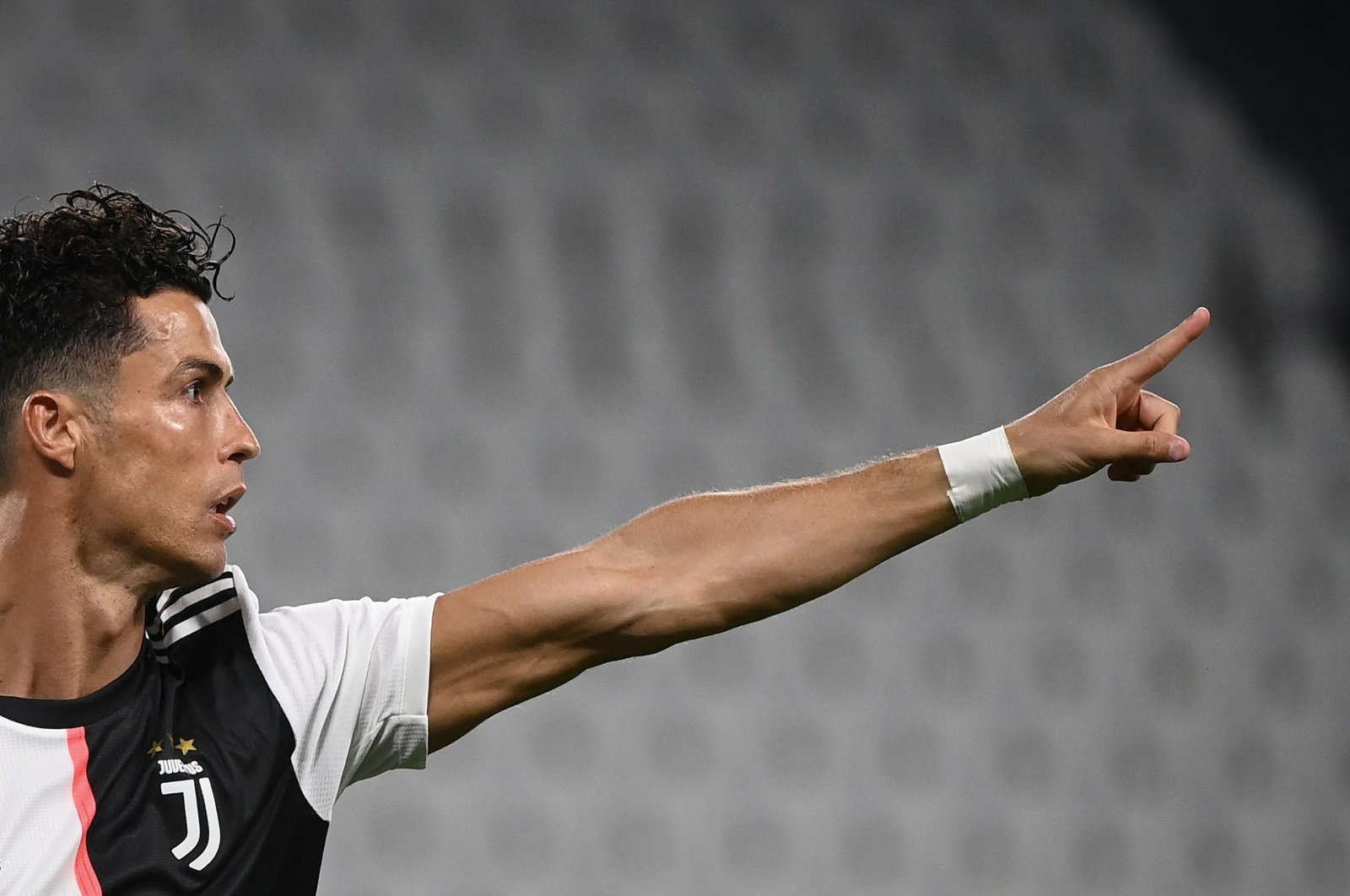 Juventus' Cristiano Ronaldo celebrates after scoring a goal during a Serie A match against Lazio, in Turin, Italy, July 20, 2020. (AFP Photo)
by French Press Agency - AFP Jul 22, 2020 9:33 am
RECOMMENDED

Cristiano Ronaldo is eyeing more records as Juventus heads for Udinese on Thursday with a ninth consecutive Serie A title within their grasp.

Ronaldo scored a double on Monday against Lazio to bring his tally to 51 Serie A goals since arriving in Turin in July 2018.

The 35-year-old not only became the first player to achieve a half century of goals in Italy, Spain and England, but was also the fastest, doing so in 61 league games.

Last year the five-time Ballon d'Or winner scored 21 goals in his first season in Italy, but thanks to his brace against Lazio he brought his tally to 30 this term, with four games remaining.

Another goal would see him match former Italy World Cup winner Felice Borel, who was the last player to score 31 goals for Juventus in the 1933-34 season.

For Ronaldo the title of top scorer – Capocannoniere – is up for grabs, as he is currently level on 30 with Lazio's Ciro Immobile.

And he could even overtake Bayern Munich's Robert Lewandowski, the top scorer in Europe with 34 goals in the Bundesliga this season.

There is also the record of Argentine teammate Gonzalo Higuain, who was Serie A top scorer under Sarri at Napoli in the 2015-16 season with 36 goals.

"Cristiano is unpredictable," said Sarri. "If he puts his mind to something, he's very determined. Not only physically, but, above all, mentally: he is a champion with his feet, but also with his head."

Juventus can seal the title with a win over 16th-placed Udinese, but it depends on Inter Milan, who is eight points behind the champions, losing to Fiorentina at the San Siro on Wednesday.

Otherwise, it could win their 36th Scudetto on Sunday, at home against Sampdoria, giving Sarri, 61, his first league title.

It would allow the club to start preparing for the Champions League, and overturning a 1-0 first-leg deficit against French club Lyon in the last 16 next month.

"Juventus are still the best side in the league," said Inter boss Antonio Conte, who coached the Turin side to the first three titles in their current run of league triumphs.

"They're set to win their ninth Scudetto in a row. We can learn from them. We've got to keep trying to improve, to be more involved in the title race, so we can eventually get our hands on the Scudetto," Conte said.

Inter Milan, who has not won the title since its historic treble in 2010 under Jose Mourinho, is however assured of a Champions League place next season.

"It's great that we've achieved this goal," continued Conte, "it was one of the club's main requests, to improve our results compared to previous seasons and to steady the ship so that things aren't so hectic at the end of the season."

Against Franck Ribery's Fiorentina it was held 1-1 earlier this season, with the 12th-placed Tuscany side coming off back-to-back wins.

"They've got a good squad of players, they're a good team and Giuseppe Iachini is doing a great job as coach," added Conte.

"They'll be unfazed by us, but when you're up against Inter you always have the motivation to give your all."

Lazio, in fourth, play at Cagliari after its league hopes were dashed at Juventus on Monday. Lazio is also poised to return to the Champions League after 13 years, as its 11 points clear of fifth-placed Roma.