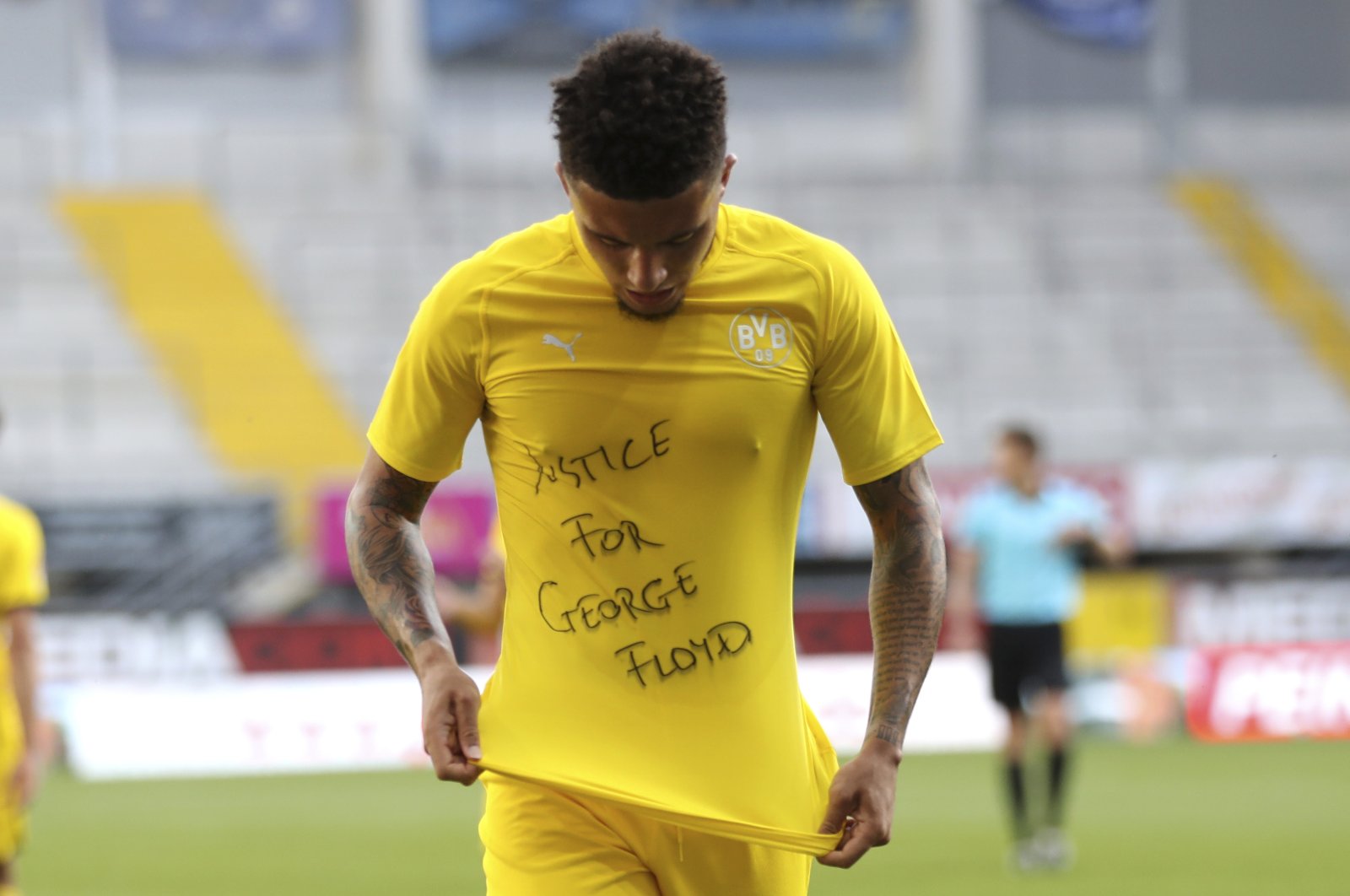 Borussia Dortmund's Jadon Sancho celebrates a goal with a "Justice for George Floyd" shirt during a Bundesliga match in Paderborn, Germany, May 31, 2020. (AP Photo)
by Agencies Jun 03, 2020 12:35 pm

From martial arts to football, professional athletes across the world continue to speak out against the killing of George Floyd, whose death in police custody sparked nationwide protests in the U.S.

Players who scored in the German and Hungarian football leagues removed their jerseys to display undershirts with the words: “Justice for George Floyd.”

Others from English football clubs Liverpool, Chelsea and Newcastle dropped to one knee during practice in a clear gesture of support.

In New Zealand, a Nigerian-born UFC fighter addressed a crowd of 4,000, imploring those listening to “speak up” and take peaceful action to register their discontent.

Dismayed by the death of Floyd and inspired by the actions of Colin Kaepernick, athletes from around the world have come together during one of the most politically charged periods in modern history.

“I can’t tolerate. I won’t tolerate. WE WON’T TOLERATE,” Manchester United midfielder Paul Pogba, one of the world’s most famous football players and a World Cup champion with France, wrote on his Instagram page to his 41 million followers alongside a picture of him looking to the sky with a clenched right fist.

It was a powerful image to accompany the picture of 29 Liverpool players kneeling around the center circle at Anfield Stadium at the end of a practice session on Monday. Or the entire Chelsea squad kneeling down and forming the letter “H” – for humans – during training on Tuesday.

Their actions mimicked the one made by Kaepernick during the national anthem in 2016 in silent protest of police brutality and racism while then playing for the San Francisco 49ers.

Kaepernick’s gesture kicked off a period of pregame activism in the NFL and other sports, but it didn’t gain a stronghold worldwide like the killing of Floyd, a black man and former community college basketball player who died after a white police officer pressed his knee into Floyd’s neck for several minutes even after he stopped moving and stopped pleading for air.

“It hit a nerve in this very particular time, which I think made people all around the world reflect on the environment we live, not only in the U.S. but in all kinds of places where there is a perpetuation of discrimination and inequality,” Jonas Baer-Hoffmann, secretary-general of global football players union FIFPro, told The Associated Press.

“We’re seeing a generation of players right now moving into the steps of athletes in the past who were socially quite engaged and willing to put themselves behind causes they care about. I think it’s incredibly empowering to see these players step forward and share in that fight for a better society.”

Things have escalated so much that FIFA, the governing body of world football, took the rare step of urging competition organizers to consider not sanctioning players who support justice for Floyd during matches. The laws of the game prohibit “any political, religious or personal slogans, statements or images.”

"For the avoidance of doubt, in a FIFA competition the recent demonstrations of players in Bundesliga matches would deserve an applause and not a punishment," FIFA President Gianni Infantino said in a statement.

English football leaders have already said players will be able to show solidarity without the prospect of facing sanctions when games resume this month after a three-month break because of the coronavirus pandemic.

Emboldened football players appear to be more confident in speaking out about racism than ever before, including Jadon Sancho, who revealed a handwritten “Justice for George Floyd” message on his undershirt after scoring a goal for Borussia Dortmund on Sunday, openly and knowingly flouting the rules.

Sancho was booked after revealing the message to mark scoring against Paderborn, although the German Football Association has said the yellow card was actually because he lifted his shirt over his head.

Marcus Rashford, a black striker for Manchester United, called for justice for Ahmaud Arbery and Breonna Taylor – two other black people killed in shooting incidents in America this year – on Twitter in the wake of Floyd’s death.

Football players may also take what has happened to Floyd more personally because of how often black players have been abused inside stadiums around Europe in recent years. The sanctions for racism – if they are handed out at all – can often be derisory.

As their own form of protest, some black players have taken to walking off the field after being racially abused by fans because many have little faith in authorities and governing bodies to effect change.

That’s the position many protesters in the U.S. are finding themselves in.

Baer-Hoffman said the reaction of sports stars was a reflection of uncertain times around the world since the outbreak of the coronavirus.

“Maybe it’s because we are living in a time where the interconnectedness of people through the pandemic has become more conscious to us all,” he said.

“When you look at the images (of the incident involving Floyd), it is manifestly disturbing. It scares you and forces you to think ... I think it stands for something much greater. For footballers in this context, they are people ... They are speaking out and, of course, have a bigger platform than most.”

When Kaepernick took a knee four years ago, U.S. star Megan Rapinoe was one of the few high-profile football players to champion his cause publicly. But the clear parallel between Kaepernick’s action and the knee of the police officer on Floyd’s neck has roused more athletes to speak out.

“In no way are we asking black lives to matter more than white lives,” DeAndre Yedlin, a U.S. football international who plays with Newcastle in England, wrote on Twitter.

“All we’re asking is we are seen as equal, as more than 3/5 of a man, as humans. My heart goes out in solidarity to George Floyd, his family, and all of the countless number of victims that have had their lives taken at the hands of meaningless police brutality.”