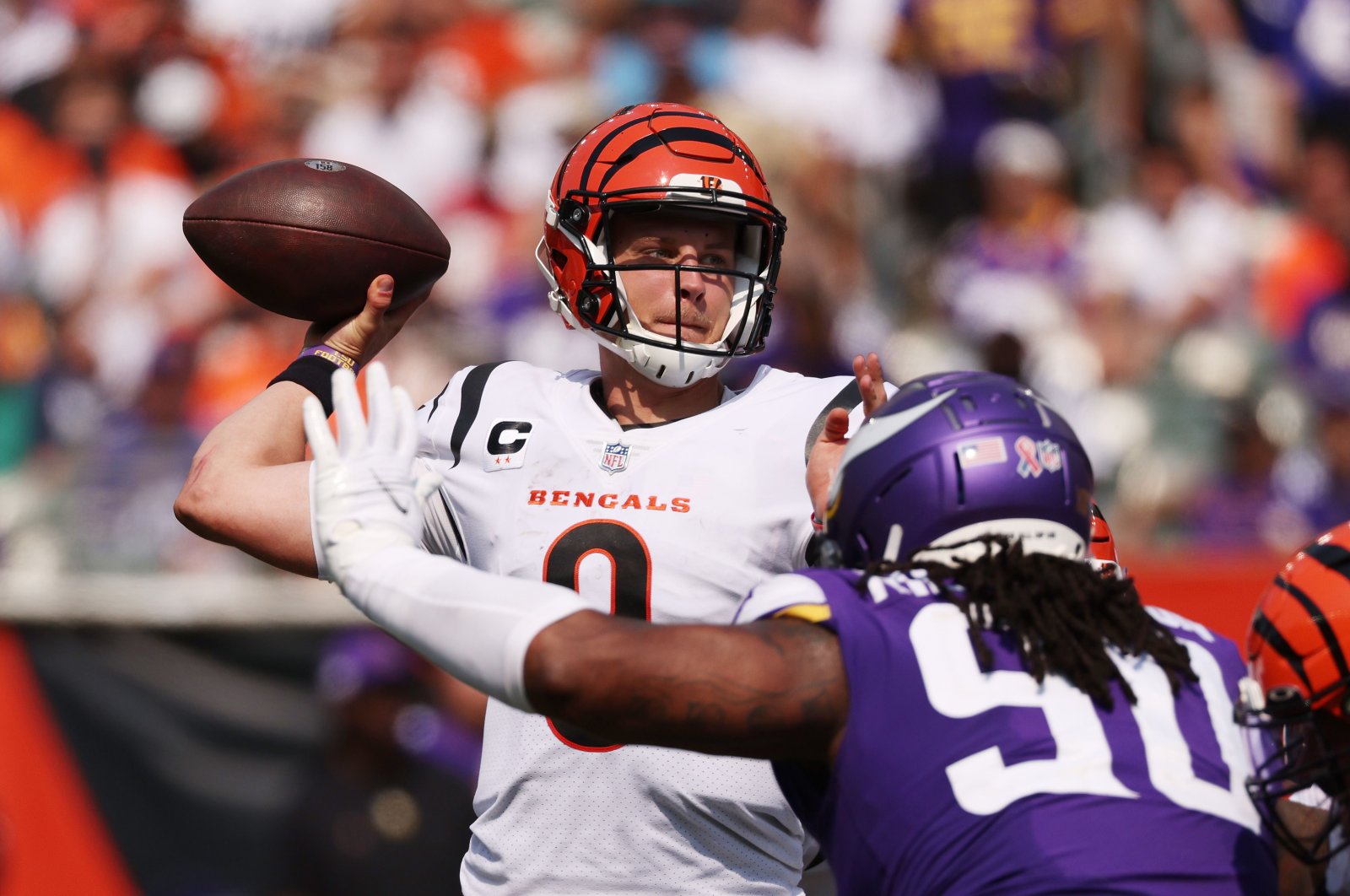 The first week of Sunday action in the NFL saw the Cincinnati Bengals pull out an overtime victory to ensure that at least one of Ohio state's major football teams emerged victorious over the weekend, averting scenes from late October 2018 when a winning team was nowhere to be found.

Joe Burrow found C.J. Uzomah with a 32-yard pass on fourth-and-short late in overtime to set up Cincinnati's victory against visiting Minnesota.

Burrow was sharp in his return from a torn ACL, completing 20-of-27 passes for 261 yards and two touchdowns. Joe Mixon rushed for 127 yards and a touchdown on 29 carries.

Patrick Mahomes passed for 337 yards and three touchdowns, all in the second half, as the host Kansas City Chiefs didn't lead until the fourth quarter but edged the Cleveland Browns 33-29 on the first Sunday of the NFL season.

Cleveland punter Jamie Gillan failed to handle a snap with 8:42 left in the fourth quarter, and the Chiefs tackled him for a fourth-down loss at the Browns' 15. Mahomes connected with Travis Kelce three plays later for an 8-yard touchdown and the winning score with 7:04 remaining.

The rally gave the Chiefs their 15th consecutive September victory as they began their quest for a third straight AFC title. Mahomes finished 27-of-36 while also throwing an 11-yard TD to Kelce and a 75-yard scoring bomb to Tyreek Hill.

Baker Mayfield played brilliantly, passing for 321 yards while going 21-of-28 to fuel the Browns, who lost at Kansas City in the divisional round of the AFC playoffs last season.

Jones, who missed the last 11 games of 2020 with a biceps injury, almost single-handedly dictated the game's tempo with incessant pressure on Tennessee quarterback Ryan Tannehill. Jones logged three sacks and a forced fumble before the first quarter ended.

Murray completed 21-of-32 passes for 289 yards and added a touchdown on the ground, while Arizona's running back tandem of Chase Edmonds and James Conner combined for 116 yards on 28 attempts.

Tyrod Taylor passed for 291 yards, 229 in the first half, and host Houston matched its interceptions total from all of last season in the victory over Jacksonville.

Taylor, making his first start for the Texans in place of inactive three-time Pro Bowl quarterback Deshaun Watson, excelled with his blend of elusiveness and daring. He finished 21-of-33 and threw two touchdown passes to pace a Texans offense that amassed 449 yards.

Jaguars quarterback Trevor Lawrence made his NFL debut and finished with 332 yards passing and three touchdowns in addition to throwing three interceptions.

Carson Wentz, acquired by the Colts in an offseason trade with Philadelphia, was 25-of-38 for 251 yards and two touchdowns, both to Zach Pascal.

Dominant defense and a special-teams score helped Pittsburgh overcome a sleepy first half and knock off host Buffalo.

The Steelers' special teams crashed a defensive struggle with 9:45 left. Safety Miles Killebrew blocked Matt Haack's punt at the Buffalo 10-yard line, and Ulysees Gilbert III scooped up the ball for Pittsburgh's 20th unanswered point, all in the second half.

Jimmy Garoppolo rebounded from a first-snap fumble to throw for 314 yards and Trey Lance tossed a touchdown pass on his first NFL attempt as San Francisco held off host Detroit.

Detroit got a final possession after Samuel's fumble with a minute remaining but stalled on downs at the San Francisco 24 in the final seconds.

Making his first start in a season opener, Justin Herbert picked up where he left off last year for Los Angeles. The second-year pro completed 31-of-47 passes for 337 yards and a touchdown, leading the Chargers past Washington in Landover, Maryland.

Herbert's favorite target was Keenan Allen, who finished with nine catches for 100 yards. Even after he was intercepted deep in Washington territory in the fourth quarter, Herbert got another chance when L.A.'s defense got the ball back on a fumble on the next play.

Darnold had a passing touchdown and rushing touchdown against his former team, with 279 yards passing by going 24-of-35 with no interceptions. He also made good use of running back Christian McCaffrey, the Carolina standout who was limited to three games last season because of injuries. McCaffrey was Carolina's leading rusher with 98 yards on 21 carries.

Heisman Trophy winner DeVonta Smith caught six passes for 71 yards and one touchdown in his NFL debut, and the Eagles outclassed the Falcons in a matchup featuring two first-time head coaches in Philadelphia's Nick Sirianni and Atlanta's Arthur Smith.

The game was moved to Jacksonville from the Superdome after Hurricane Ida damaged New Orleans two weeks ago.

Winston made his first start for the Saints and passed for just 148 yards, but he completed 14-of-20 passes with no interceptions. Rodgers completed 15-of-28 passes for 133 yards and a 36.8 passer rating before being replaced by Jordan Love in the fourth quarter.

Bridgewater delivered an accurate performance in his Denver debut, completing 28-of-36 passes and helping the Broncos maintain possession for just over 35 minutes. Denver linebacker Von Miller recorded two sacks, and the NFL's active sack leader raised his total to 108.

New York quarterback Daniel Jones completed 22-of-37 passes for 267 yards. He added a rushing TD with no time remaining but also fumbled deep in Denver territory late in the third quarter.

Waddle, the No. 6 overall pick in this year's draft, grabbed his first career touchdown catch with 10:51 remaining in the third quarter to put Miami on top for good at 17-10. Nick Folk's 42-yard field goal with 2:50 left in the third and another from 33 yards out at 10:36 of the fourth pulled New England within 17-16.

Tagovailoa, who also had a rushing touchdown, finished 16-for-27 passing and was also intercepted by New England defensive back Jonathan Jones with 8:07 to play in the fourth. Mac Jones and the Patriots drove 41 yards before running back Damien Harris lost a fumble at the Dolphins' 11-yard line.

Matthew Stafford completed 20 of 26 passes for 321 yards and three touchdowns in his team debut to lead host Los Angeles to a win over the Chicago Bears on Sunday night.

Van Jefferson, Cooper Kupp and Robert Woods each hauled in touchdown passes for Los Angeles (1-0). Darrell Henderson Jr. added 70 yards and a touchdown on the ground.

David Montgomery had 16 carries for 108 yards and a touchdown to lead the offensive attack for Chicago (0-1). Andy Dalton completed 27 of 38 passes for 206 yards and an interception, and rookie Justin Fields completed both of his pass attempts and rushed for a 3-yard touchdown in limited action during his NFL debut.