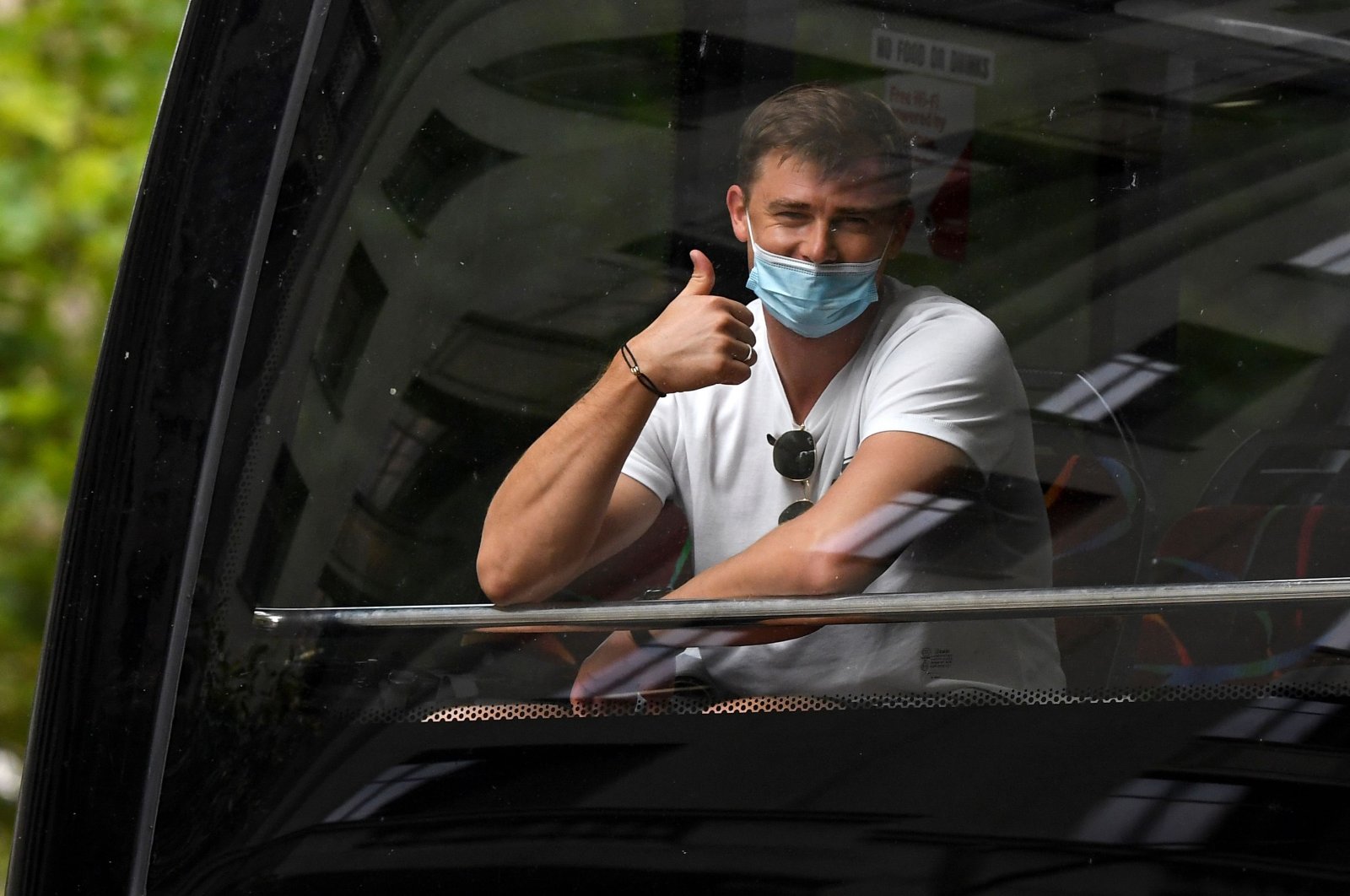 A man gestures as tennis players, coaches and officials arrive at a hotel before quarantining for two weeks ahead of the Australian Open tennis tournament in Melbourne, Jan. 15, 2021. (AFP Photo)
by REUTERS Jan 16, 2021 12:28 pm
RECOMMENDED

Forty-seven players have been forced into two weeks of hotel quarantine in Melbourne after three coronavirus infections were reported on two chartered flights carrying them to the year's first grand slam, the tournament organisers said on Saturday.

Two dozen players who arrived from Los Angeles entered strict hotel quarantine after an aircrew member and Australian Open participant who is not a player tested positive for the new coronavirus.

Later, another non-player passenger on a flight from Abu Dhabi tested positive, prompting the organizers to usher 23 players into hotel quarantine.

All three who tested positive had been transferred to a health hotel, the organizers said in a statement.

The players would not be able to leave their hotel rooms for 14 days and until they are medically cleared, they said.

"They will not be eligible to practice."

The decision will translate into unequal preparation for the participants. Uruguayan Pablo Cuevas took to Twitter to express his feelings.

"From having 5 hours of training in a bubble to this...(strict quarantine x 15 days). I will be showing you my workouts x Instagram (inside the room)," wrote the world number 68.

Australia has agreed to accept about 1,200 players, officials and staff on 15 flights for the major sporting event that is due to begin next month.

Apart from Cuevas, Mexican player Santiago Gonzalez also confirmed being on that flight in a social media post.

Other players cited by local media as likely to be on the flight included Tennys Sandgren, who was granted special permission to travel from Los Angeles late last week after testing positive for the new coronavirus, which he had previously had, and world 13 doubles player Victoria Azarenka of Belarus.

"We are communicating with everyone on this flight, and particularly the playing group whose conditions have now changed, to ensure their needs are being catered to as much as possible," said tournament director Craig Tiley.

The inbound infections came as Australia recorded one locally acquired case, as states began to relax travel bans on signs an outbreak in the northern state of Queensland had been contained.

The case, in western Sydney, is thought to be linked to a known cluster in New South Wales, the most populous state, health officials said.

Australia has halved the number of returning travelers that it will accept, to lower the risk of highly infectious strains seeping into the community, as occurred at a site in Queensland two weeks ago.

Emirates Airline said Friday it would suspend flights between Dubai and Melbourne, Sydney and Brisbane by early next week until further notice.

It has been two weeks since Queensland recorded its latest hotel outbreak, fuelling hopes the spread had been contained. As a result, Victoria and South Australia will reopen borders to the state by Sunday.

Australia, which logged 20 infections in hotel quarantine overnight, has been one of the world's most successful nations in managing the coronavirus spread, with about 28,700 infections and 909 deaths.