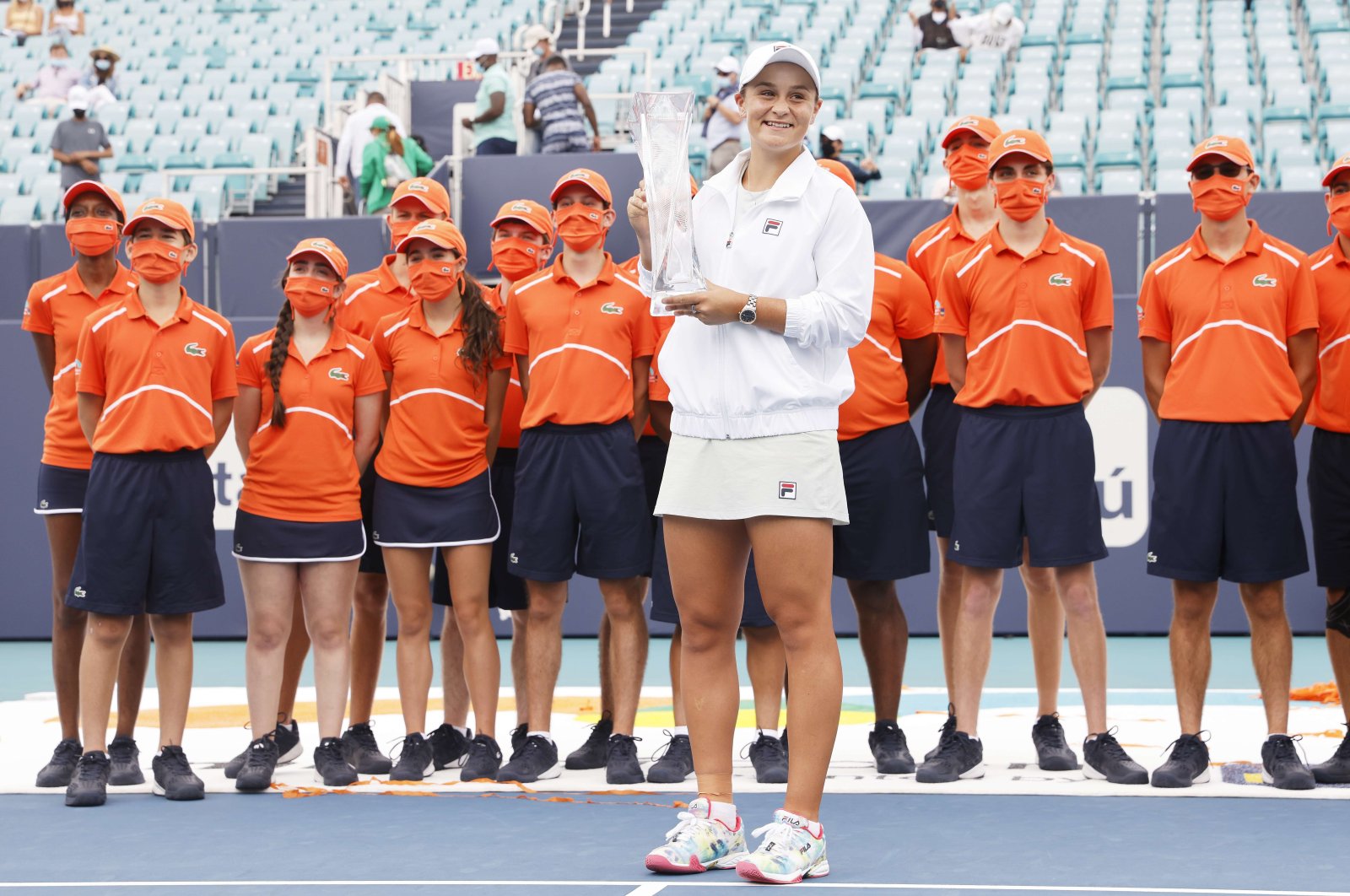 Ashleigh Barty of Australia poses with the winner's trophy after defeating Bianca Andreescu of Canada during the final of the Miami Open at Hard Rock Stadium on April 03, 2021 in Miami Gardens, Florida. (Michael Reaves/Getty Images via AFP)
by ASSOCIATED PRESS
Apr 04, 2021 1:14 am

World No. 1 Ashleigh Barty repeated last year's success and lifted the trophy at Miami Open on Saturday in a final match concluded by her opponent Bianca Andreescu's injury.

The Australian was already in control of the match when Andreescu turned her right foot while hitting a forehand and sprawled to the hard court. Barty hit one more shot to win the point, and play continued.

But during the ensuing changeover, a trainer taped Andreescu’s foot, and after another game the injury-plagued Canadian reluctantly called it quits.

"I really do feel for Bianca,” Barty said. "She has had such a rough trot with injuries in the past.”

Andreescu was again tearful at the start of her postmatch news conference, when she explained that her trainer convinced her to retire rather than risk further injury.

"I didn't want to stop,” she said. "I trusted him, and I knew it was the best decision."

The tournament was the first in the United States for the 20-year-old Andreescu since she won the 2019 U.S. Open. She sat out 2020 because of injuries and the coronavirus pandemic and now faces another possible layoff.

"I'm going to see what's up with my foot, and start visualizing the healing process if it's something bad,” Andreescu said.

On Sunday, 19-year-old Italian Jannik Sinner will try to become the youngest men’s champion in tournament history when he plays No. 26-seeded Hubert Hurkacz of Poland. Each is seeking the biggest title of his career.

Barty made her own breakthrough by winning the 2019 Miami championship. The tournament was canceled last year at the start of the coronavirus pandemic.

"I shouldn’t belong with that group,” Barty said with a smile. "I haven't earned the right to be on a list with those champions. They’re genuine champions and legends, and I feel very privileged to be mentioned in that sentence.”

The match between Barty and Andreescu was their first, and a potential friendly rivalry looms. Barty dominated from the start of the final with her strong serve and all-court game.

"She doesn’t play like a lot of the players on tour,” Andreescu said. "She likes to mix it up, like me. That’s not fun to play against. I guess I’m getting a taste of my own medicine.”

Barty, who was eliminated from the Australian Open during the quarterfinals, was playing outside of Australia for the first time since February 2020, and she arrived in Miami after a trip that took 45 hours because of two canceled flights.

"I said to my coach when we got here, it can only get better from here,” she said.

It did. Barty was one point from defeat in her opening match against Kristina Kucova, but she gained momentum from there and will keep her No. 1 ranking next week.

With the pandemic limiting travel, the 2019 French Open champion heads into the clay court season expecting to remain away from home for months.

"It’s a great start for us,” Barty said. "I'm looking forward to what will hopefully be a big season for us, and hopefully we can play some really good tennis.”

Because the pandemic reduced tournament revenue and severely limited attendance, the champion received $300,110, compared with the $1.35 million Barty won in 2019. Only 750 fans were allowed on the grounds per session.