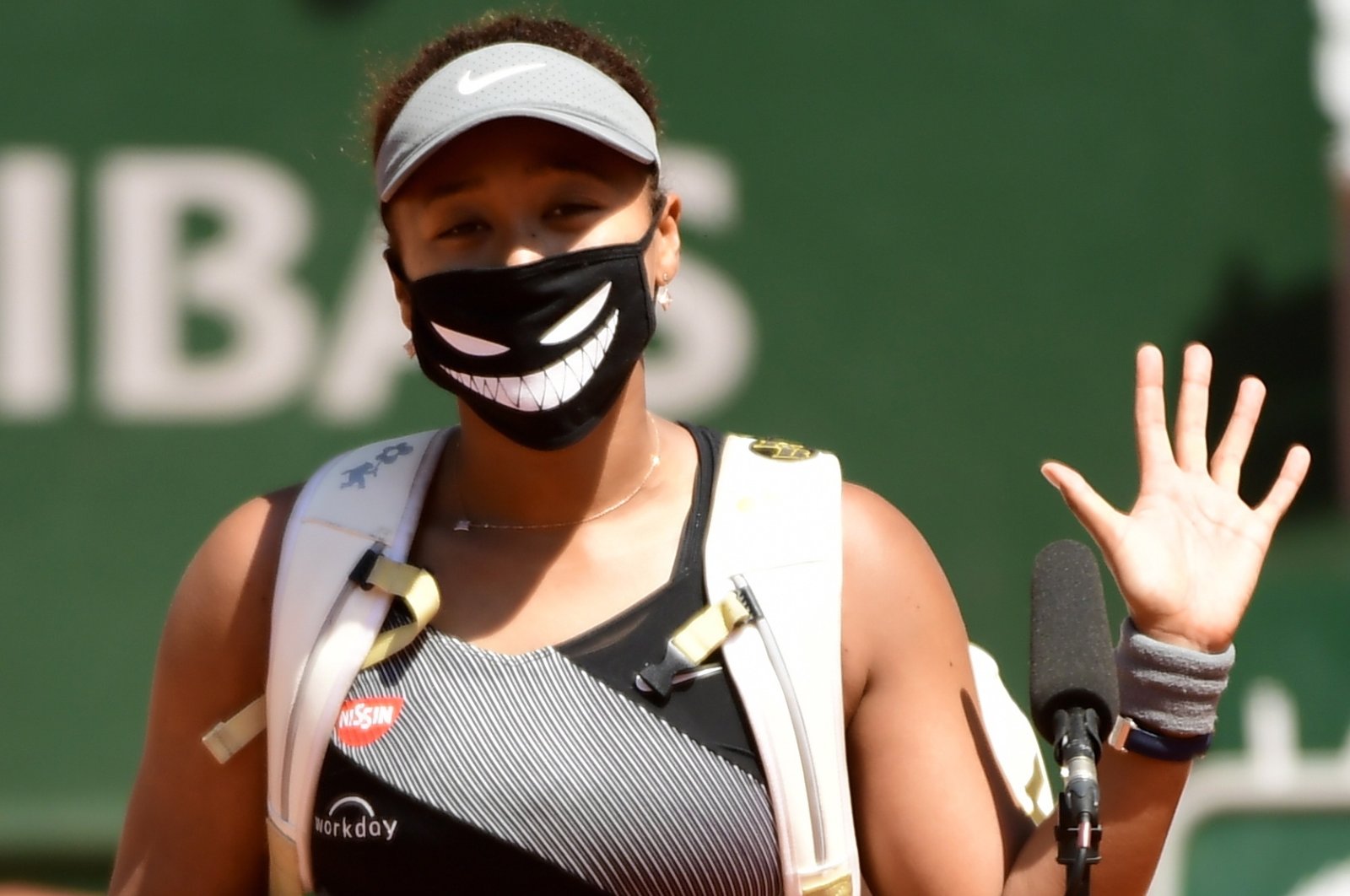 Naomi Osaka of Japan celebrates winning against Patricia Maria Tig of Romania during their first round match at the French Open tennis tournament at Roland ​Garros in Paris, France, May 30, 2021. (EPA Photo)
by French Press Agency - AFP May 31, 2021 9:12 pm
RECOMMENDED

The world's No. 2 ranked women's tennis player, Naomi Osaka, withdrew from French Open on Monday after a row with organizers over her decision to boycott all media activities.

"The best thing for the tournament, the other players and my well-being is that I withdraw so that everyone can get back to focusing on the tennis going on in Paris," Osaka wrote on Twitter

The 23-year-old Japanese star was fined $15,000 on Sunday and threatened with disqualification after she refused to carry out a mandatory news conference following her first-round win.

She claimed on the eve of Roland Garros that such post-match inquests were akin to "kicking people when they are down" and that they had a detrimental effect on her mental health.

"I never wanted to be a distraction and I accept that my timing was not ideal and my message could have been clearer," the four-time Grand Slam title winner said in her statement. "The truth is I have suffered bouts of depression since the U.S. Open in 2018 and I have had a really hard time coping with that."

She added: "In Paris, I was already feeling vulnerable and anxious so I thought it was better to exercise self-care and skip the press conferences.

"I announced it preemptively because I do feel like the rules are quite outdated in parts and I wanted to highlight that."

Osaka said she has also apologized to organizers over the affair which has dominated the early stages of the French Open ever since she warned last week that she would not carry out any media activity.

French Tennis Federation President Gilles Moretton has described her vow of silence as "a phenomenal error."

The four Grand Slam events, Wimbledon, the French, Australian and U.S. Open, said they had written to Osaka "to check on her well-being and offer support."

"She was also reminded of her obligations, the consequences of not meeting them and that rules should equally apply to all players."

Osaka is the world's highest earning female athlete, making $37.4 million in 2020. She burst onto the scene in 2018 with a maiden Slam win at the U.S. Open. She has gone on to win another title in New York as well as two Australian Opens.

Earlier Monday, Osaka's coach said she wanted to use her superstar status to force change with her media boycott. "Naomi has the opportunity to use her status to address problems and to initiate things," Osaka's Belgian coach Wim Fissette told German magazine Der Spiegel.

"In the United States, the subject is very topical at the moment, as athletes want more freedom in dealing with the press. "So that they are simply not threatened right away with punishment if they don't feel well for a day."

Mari Osaka, a former player herself, said her sister was struggling to cope in the run-up to Paris.

"Naomi mentioned to me before the tournament that a family member had come up to her and remarked that she's bad on clay," Mari wrote on Reddit.

"At every press conference she's told she has a bad record on clay.

"When she lost in Rome, she was not OK mentally. She was completely shattered and I think everyone's remarks and opinions have gotten to her head and she herself believed that she was bad on clay."