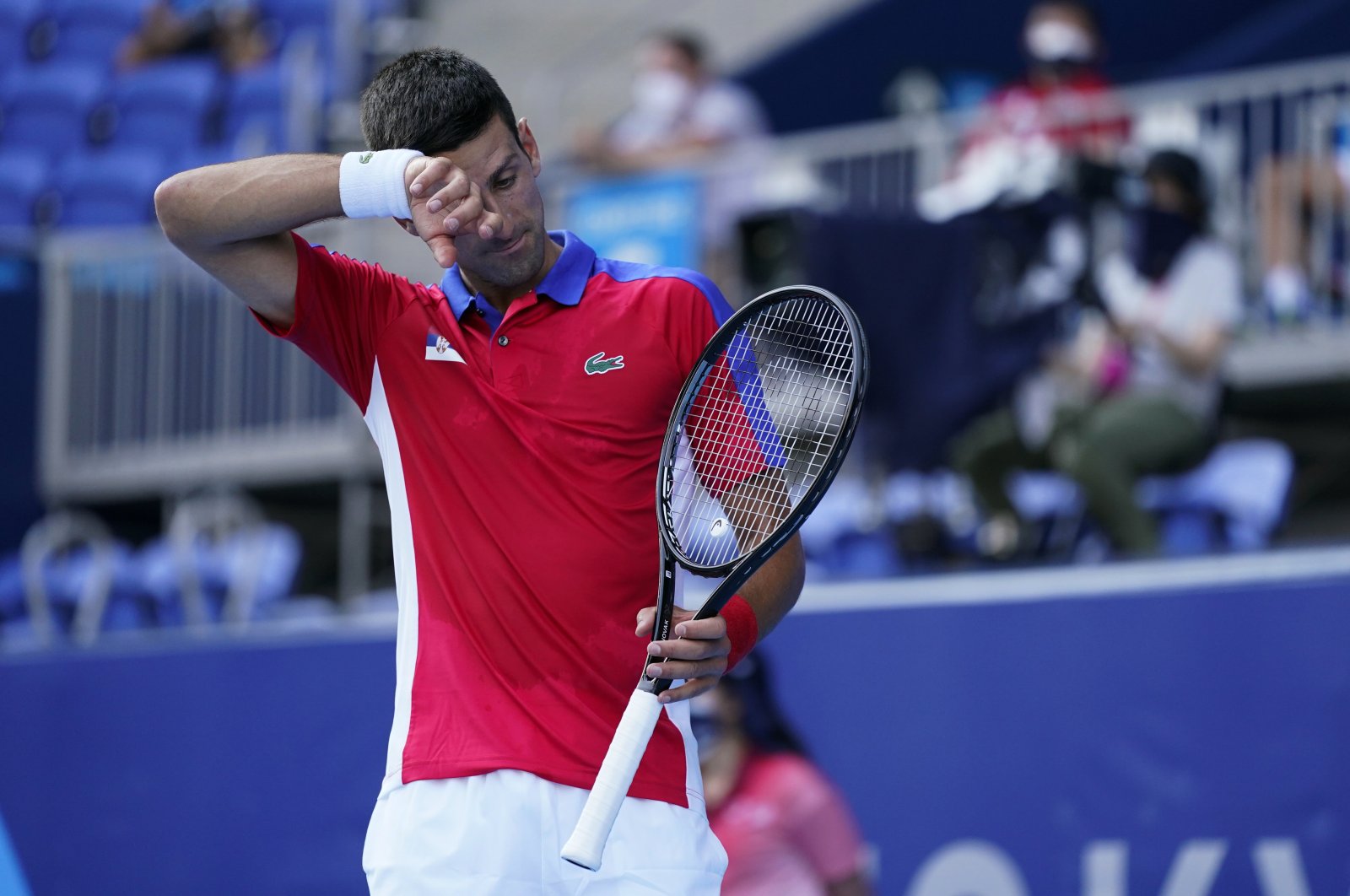 Novak Djokovic of Serbia wipes sweat from his brow as he competes with Hugo Dellien of Bolivia, during the tennis competition at the 2020 Summer Olympics, in Tokyo, Japan, July 24, 2021. (AP Photo)
by German Press Agency - DPA Jul 24, 2021 1:34 pm
RECOMMENDED

World No. 1 Novak Djokovic and other players called for organizers to rethink the Tokyo 2020 Olympic tennis schedule as heat and humidity in the Japanese quickly became a major issue for the athletes competing in the Games.

Djokovic eased to a 6-2, 6-2 victory over Bolivia’s Hugo Dellien on Saturday. Still, tougher assignments lie between him and a much-coveted gold medal for Serbia, and the weather could yet prove his most difficult opponent.

It is well known that Djokovic struggles with heat and humidity, and he said with a wry smile: “I’m still waiting to meet the player that likes this kind of weather. Playing in extreme heat and humidity that is 90% or God knows how much, it’s very challenging.

“Obviously, it’s the same for everyone, and it’s something we’ve known coming into Tokyo; we expected that the conditions were going to be very tough, but before you come here and experience that, you don’t really know how difficult it is.

"I felt like there was trapped hot air that was absorbed by the surface. It was tough, and probably tougher for the earlier matches.”

Matches played at ATP, and WTA tournaments held in similar conditions often do not start until late afternoon, but in Tokyo, all courts start at 11 a.m., meaning players are competing in the hottest part of the day.

Later starts were considered, but, with organizers of the International Tennis Federation (ITF) having to plan for potential rain or extreme heat breaks and a lack of infrastructure for very late finishes, a daytime schedule was deemed best.

An ITF spokesperson said: “Player health is paramount, and great consideration has been given to the 11 a.m. or a later start. The decision to retain 11 a.m. was made based on data, a 9-day event and to accommodate factors such as local authority restrictions due to COVID-19 and the unpredictability of the weather.

“Extreme conditions will always put pressure on a schedule and make an optimum schedule challenging. Rainfall is as much of an issue as extreme heat. An Extreme Weather Policy is in place. Tokyo 2020 competition officials have set procedures to monitor the heat stress index which determines whether the play should be modified and have implemented these procedures today.”

Djokovic added: “I don’t really get why ITF doesn’t want to move the matches. This was the last center court match, and it was finished before 5 p.m.

“There is hopefully some kind of an understanding from ITF on what they’ve seen. All the athletes train and dream of being at an Olympic Games and then playing for half an hour and retiring; you don’t want to have the Olympic experience that way. But we have to accept whatever the circumstances are.”

Zarina Diyas was the only player to withdraw mid-match but many struggled and, explaining how he felt on the court, Djokovic said: “You’re constantly dehydrated; you feel you have weights on your shoulders because there’s so much heat and humidity and stagnated air."

Djokovic, who is bidding to become the first man to win a Golden Slam of all four major titles and singles gold in the same year, will next take on German Jan-Lennard Struff. Meanwhile, second seed Daniil Medvedev also found the conditions tough in a 6-4, 7-6 (10-8) victory over Alexander Bublik.

Medvedev said: “Like they do in Mexico, the matches maybe should start at six (p.m.) because the heat actually gets much, much lighter. We all try to practice at six.

“The fact that we have only one minute between changeovers is a joke. If you ask, let’s say 200 tennis players that are here, I think 195 will tell you that one minute is a joke. It should be 1:30.”

In the women’s draw, sixth seed Iga Swiatek followed in her father’s footsteps by making her Olympic debut with a 6-2, 6-2 victory over Mona Barthel. Tomasz Swiatek competed for Poland in rowing at the Games in Seoul in 1988.

Dutchwoman Kiki Bertens played the last singles match of her career on Saturday, losing 6-4, 3-6, 6-4 to Marketa Vondrousova, but there were wins for French Open champion Barbora Krejcikova and ninth seed Belinda Bencic.