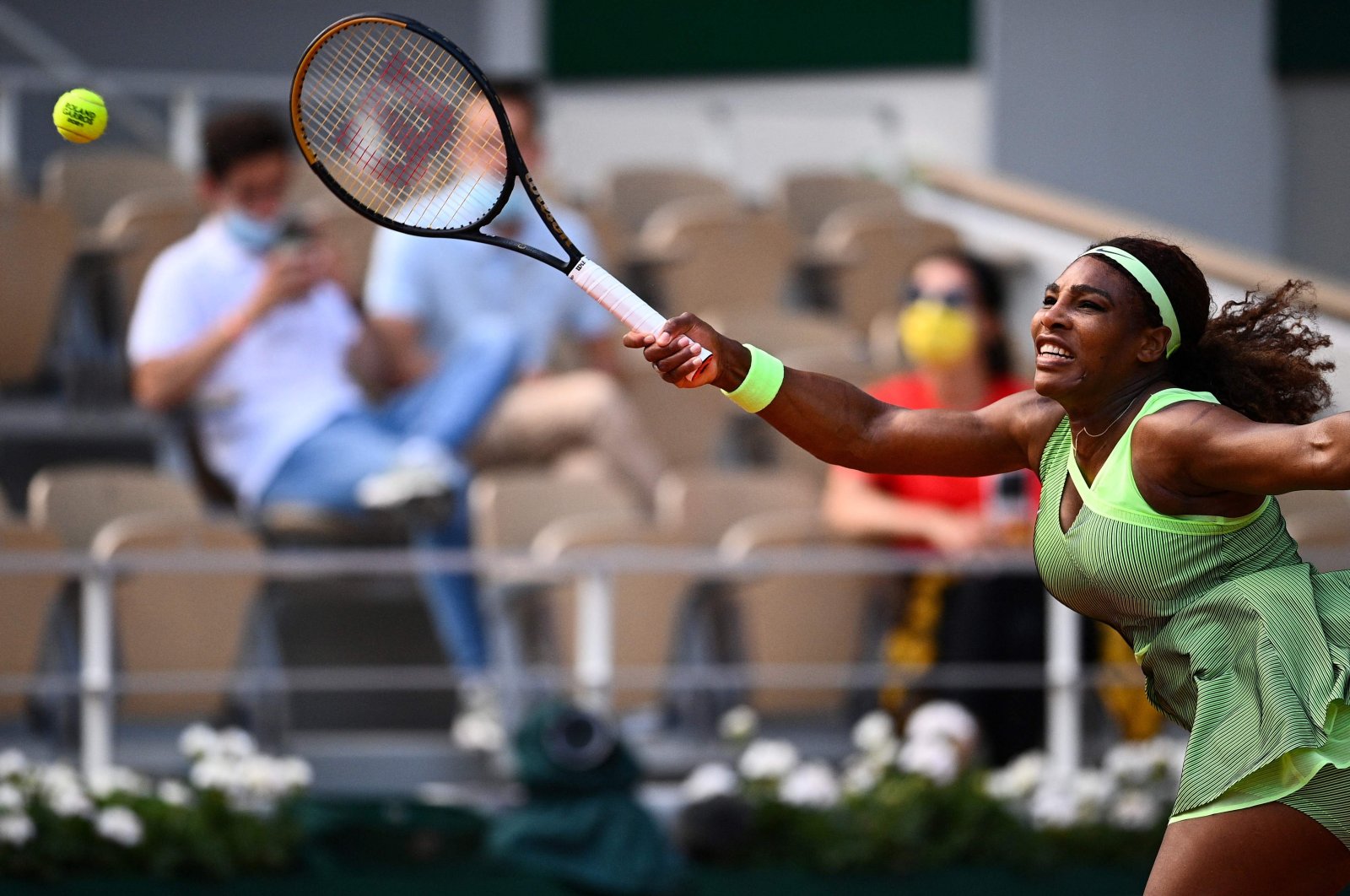 Serena Williams of the U.S. returns the ball to Kazakhstan's Elena Rybakina during their women's singles fourth round tennis match on Day 8 of The Roland Garros 2021 French Open tennis tournament in Paris, June 6, 2021. (AFP Photo)
by Agencies Jun 06, 2021 10:05 pm
RECOMMENDED

Serena Williams turns 40 in September while Roger Federer hit that milestone the month before. No one knows how many more French Open appearances each will make, and this year's tournament ended for both on Sunday.

Williams fell way behind and could not put together a comeback against a much younger and less-experienced opponent in the fourth round at Roland Garros, losing 6-3, 7-5 to Elena Rybakina – who wasn't even born when the American made her tournament debut in 1998.

Asked whether that might have been her last match at the clay-court major, Williams responded: “Yeah, I’m definitely not thinking about it at all. I’m definitely thinking just about other things, but not about that.”

Her defeat came hours after Federer withdrew, saying he needed to let his body recover ahead of Wimbledon after a long third-round victory that ended at nearly 1 a.m. on Sunday.

She has won 23 Grand Slam singles titles; Federer has won 20. They are two of the sport's greatest and most popular players, so it was quite a blow to the tournament, its TV partners and tennis fans to see both gone from the French Open field one after the other – and a week after Naomi Osaka pulled out, citing a need for a mental health break.

Williams has won the French Open three times. But the American hasn’t been past the fourth round in Paris since she was the runner-up in 2016.

Rybakina is a 21-year-old from Kazakhstan who is ranked 22nd. This was just the seventh Grand Slam appearance for Rybakina – and the first time she ever made it so much as past the second round.

Against Williams, whose right thigh carried a heavy tape job, Rybakina hit big, flat serves. She dealt with, but managed to steady, her nerves. She even produced the occasional return winner off Williams’ speedy and spectacularly gifted serve, breaking her five times, including in the next-to-last game.

“I am so happy with my match today. It was amazing," Rybakina said.

As for the final game, when she served out by far the biggest win of her nascent career, Rybakina said: “Of course I was nervous. I was not serving that well before. But I’m just happy that I just managed.”

Every time Williams appeared as if she might turn things around, she could not quite get the momentum fully in her favor.

In the next game, Williams gave away the opening point when, near the baseline, she failed to get out of the way of a shot from Rybakina that was flying long. Williams smiled ruefully and leaned over, resting and propping herself up with her racket.

Repeatedly, one sort of mistake or another undid Williams. She ended up with 19 unforced errors and only 15 winners.

“I’m so close. There is literally a point here, a point there, that could change the whole course of the match,” Williams said. “I’m not winning those points. That, like, literally could just change everything.”

Since winning the 2017 Australian Open while pregnant for her most recent major singles title – No. 23 set a record for the professional era – Williams has come close to tying Margaret Court's all-time mark of 24. That includes four runner-up finishes at Grand Slam tournaments, most recently against Bianca Andreescu at the 2019 U.S. Open.

But since then, Williams has been beaten twice in the semifinals, and once each in the third and fourth rounds. Last year at the French Open, she withdrew before the second round, citing an injured left Achilles.

Federer, meanwhile, never had pulled out of a Grand Slam tournament once he had started competing in it until now.

Rybakina next will meet Anastasia Pavlyuchenkova with a semifinal berth on the line. Pavlyuchenkova advanced with a 5-7, 6-3, 6-2 victory over two-time Australian Open champion Victoria Azarenka.

The other quarterfinal on that side of the women’s draw is going to be Paula Badosa against Tamara Zidansek. Neither has been this far at a major tournament, either.

One of those four players will become a first-time Grand Slam finalist next weekend.

Stefanos Tsitsipas is still looking for his first major final, too, and he reached the quarterfinals at Roland Garros for the second year in a row by eliminating 12th-seeded Pablo Carreno Busta 6-3, 6-2, 7-5.

Tsitsipas next faces No. 2 Daniil Medvedev, who has won six of their previous seven meetings.