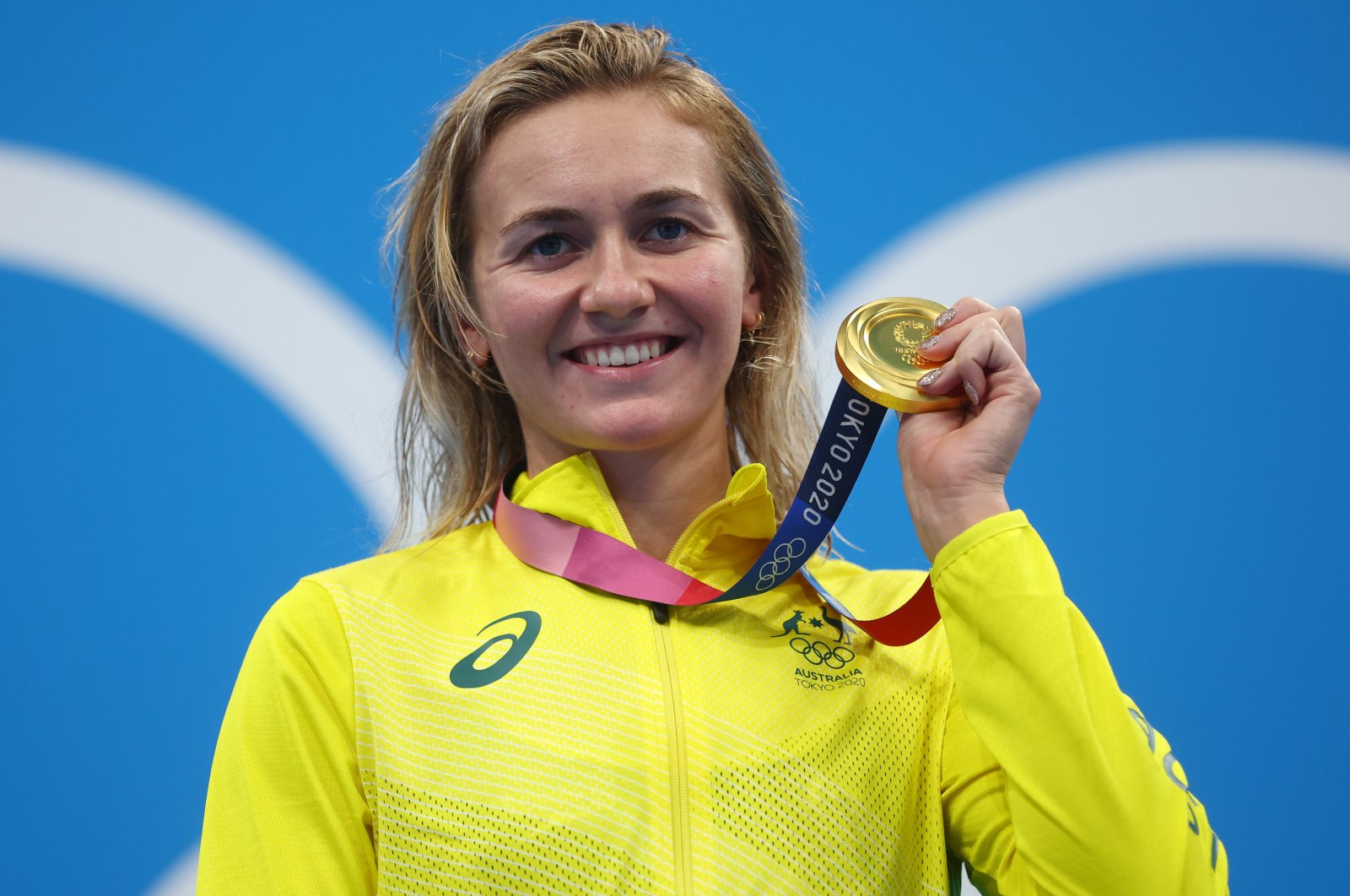 The Aquatics Centre also witnessed another dominant 100-meter breaststroke swim by world-record holder Adam Peaty, who defended his title to give Britain its first gold medal of the Games.

Elsewhere on the third day of action in Tokyo, Norway's Kristian Blummenfelt won the men's triathlon in a race marred by a bizarre false start.

Ledecky came to Japan on the back of winning four gold medals and a silver at Rio in 2016, but Titmus has been snapping at her heels, ousting her as world champion in 2019 and topping the timesheets this season.

Titmus inched clear over the final 50-meter to touch in 3 minutes 56.69 seconds after an absorbing encounter. Only world record holder Ledecky has ever gone quicker.

"I tried to stay as composed as I could and use the speed that I have," said the Australian, whose win was celebrated wildly by her coach, who ripped off his mask and gesticulated.

"To pull it off in the backend against someone who has an amazing second half of her race, I'm really proud of that."

The United States team spearheaded by Dressel stormed to the men's 4x100m relay gold medal in the third-quickest time ever to close the morning session.

Zach Apple brought them home after Dressel led off, with sizzling legs from Blake Pieroni and Bowen Becker ensuring they touched in 3:08.97, ahead of Italy and Australia.

It could be the start of a seven-title spree for Dressel, 24, whose 13 world titles have prompted inevitable comparisons with Phelps – winner of eight golds in 2008 and 23 in total.

The unstoppable Peaty extended his dominance of the 100-meter breaststroke event, powering to the line in 57.37 seconds ahead of Dutchman Arno Kamminga while Canada's Maggie MacNeil dethroned Sarah Sjostrom to win the women's 100-meter butterfly.

Earlier on Monday, Norway's Blummenfelt won the men's triathlon after a farcical start.

The 27-year-old crossed the line in a time of 1:45:04 before raising the winning line tape above his head and then throwing himself to the ground in celebration.

But the main talking point after the race was the chaotic start, which saw around two-thirds of the 56 competitors dive into the water and set off on the swimming leg only to be hauled back.

The bungled start was caused by a media boat filming the competitors lined up before they dived into the water for the 1.5-kilometer swimming leg.

"The Olympics is not a place for enjoyment," he told public broadcaster NHK. "For me, it's a life-or-death battlefield."

After an exceptionally rocky build-up to the Games, with a year's delay and fans banned over the coronavirus pandemic, Japan has enjoyed a strong start with five golds in the first two days.

The United States took the medals table lead from China by midday Monday with seven golds, while China had six and Japan five.

Home favorite Naomi Osaka stepped up her quest for Olympic tennis gold, easing into the third round with a 6-3, 6-2 win over Switzerland's Viktorija Golubic.

In the men's event, Serbia's tennis world number one Novak Djokovic takes on Jan-Lennard Struff of Germany in round two as he pursues his bid for a first Olympic title.

The 2008 bronze medallist has won the Australian Open, French Open and Wimbledon this year, giving him a shot at the Golden Slam – winning all four majors and the Olympics in the same season.