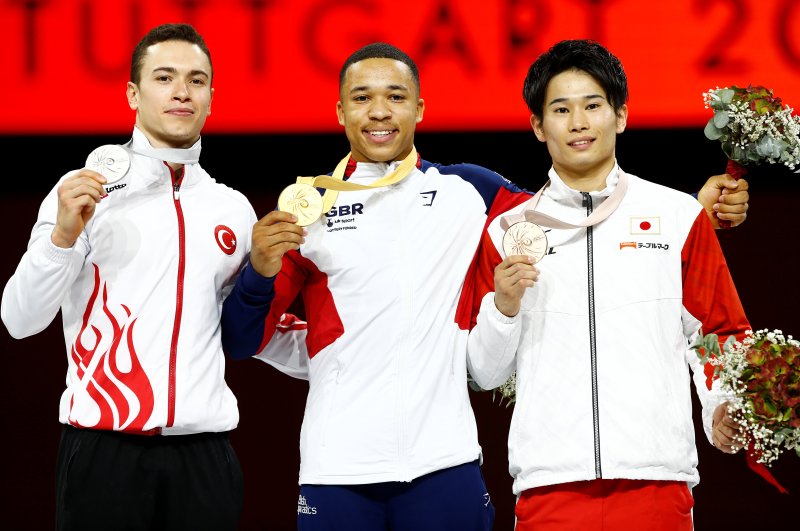 Ahmet Önder joined the crowded field of Turkish athletes securing a spot in Tokyo 2020 and the young gymnast, who returned with a silver medal from the world championships, looks forward to the thrill and honor of participating in the Olympics for his country

In 2020, Ahmet Önder’s life is driven by a single goal: to achieve glory for Turkey at this year’s Summer Olympic Games in Tokyo. The gymnast has worked tirelessly, and his determination and desire are unwavering. Önder wants that Olympic medal around his neck and experience what it feels to be the pride of a nation. "I have three targets in mind. The first is to represent my country with honor and to show the world my discipline and work ethic. Second is to actually enjoy and take in the experience of the Olympics,” Onder told Anadolu Agency in an exclusive interview. "The last, but certainly not the least, is to have a medal around my neck when I return home.”

The 23-year-old athlete will represent Turkey in the artistic gymnastics parallel bars competition at the summer Olympics starting in July. He secured his spot in Tokyo with a memorable display at the Artistic Gymnastics World Championships 2019 held in Stuttgart, Germany.

Önder won silver at the tournament and his final score was just shy of eventual champion Joe Fraser’s tally. "All athletes from Turkey also have a shared goal. We want the Turkish national anthem played at the greatest sporting competition, and we want the world to hear it,” he said. "That is an incomparable feeling for a sportsman. It fills you with a sense of pride and you feel invincible.”
Önder’s success is hard-earned and the result of immense dedication. "My days are all about training. I train twice a day, and I am always willing to spend months working for a contest that lasts a few minutes,” he said. "I know there is simply no room for mistakes. I will practice every movement hundreds of times before the actual performance.” He is very clear on what an athlete can achieve with a team and what needs to be done on an individual level. "Training with your team is necessary as it gives you essential feedback. But maintaining personal fitness and discipline is equally imperative,” said Önder. "You can always fool your coach or your friends, but you cannot ever deceive yourself. I believe and live that reality. I know my body and what it needs so I am very strict about my diet and training routine.”

He also realizes the importance of learning from other athletes, irrespective of their sport. "Athletes should also follow other sports besides their own discipline. You may not gain any technical knowledge about your field, but there are many skills and qualities you can pick up from top athletes in other sports,” said Önder.
He acknowledged the part played by Turkey’s sporting authorities in nurturing local talent. "The facilities and opportunities offered to Turkish athletes are second to none. We are set up for success and I feel we can better than anyone in the world,” he said. However, Önder feels there is an area in which Turkey still lacks: sponsorships and support for athletes from major brands and private entities. "We see our competitors signing deals with all sorts of brands, from carmakers to sportswear or cosmetics companies. They get recognition from brands that have global reach and networks,” said Önder. "There are plenty such examples in Turkey too, but I do not think it is enough by any standard. Brands here need to support individual athletes and give Turkish sportsmen and women the recognition they deserve.”

Greater corporate support, he said, would help bring more youngsters towards gymnastics and sports in general. "Turkey needs more athletes in every sport. Our youngsters also need to realize what gymnastics and sports can do for them. They give you the chance to shape your body and control your mind;ss to be the best you have to influence every aspect of your thinking,” said Önder. "Confidence and high self-esteem are both requirements and results of sports. We need to encourage all youngsters to pursue their sporting interests and give them the support they need to become the best.”