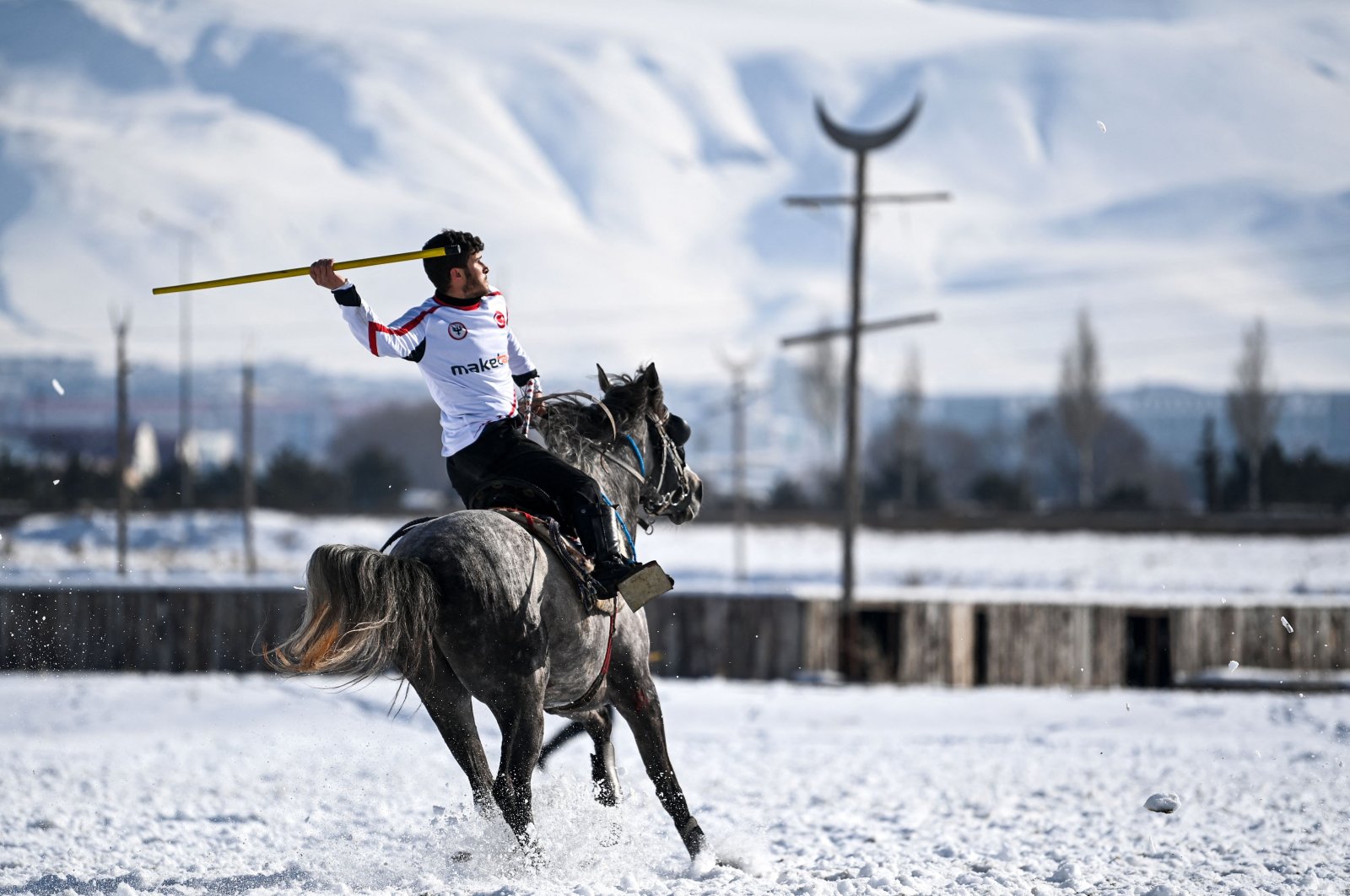 A competitor prepares to throw a javelin toward an opponent during the Turkish game of cirit between Uzmanlar Sports Club and Dadaş Sports Club, Erzurum, eastern Turkey, March 5, 2021. (AFP Photo)
by ASSOCIATED PRESS Mar 17, 2021 12:34 pm
RECOMMENDED

Riders in eastern Turkey play cirit, an equestrian sport that dates back to the martial horsemen who spearheaded the historical conquests of central Asia’s Turkic tribes.

A recent match on a snow-covered field in Erzurum saw players from two of the province’s clubs – Uzmanlar Sports Club and Dadaş Sports Club – line up for a game that was developed more than 1,000 years ago to hone the cavalry skills developed by warriors including the Seljuks, who conquered Anatolia in the 11th century, and the Huns.

The sport revolves around a rider trying to spear his or her opponent with a "javelin” – these days, a rubber-tipped, meter-long (40-inch-long) piece of wood. The sport’s Turkish name translates as javelin or dart.

Riders from each team, which can number up to a dozen players, face each other, alternately acting as the thrower and the rider being chased. A match is held over two 35-minute periods.

As well as points awarded for hitting an opponent with a javelin, the evading rider can score by performing maneuvers such as hanging from his horse’s neck to avoid being struck or catching a javelin mid-air.

Riders are penalized for transgressions such as hitting an opponent’s mount or riding outside of the playing area, which can be from 70 to 130 meters (230 to 425 feet) in length.

Cirit was popular within the Ottoman Empire, the successor to the Seljuks’ domains, before it was banned in the early 19th century as the sultan sought to break up military elites. However, its popularity returned and it is now one of many traditional sports encouraged by the government.

Arabian horses are favored for their agility and can fetch up to TL 40,000 ($5,300). Tournaments are often arranged during festivals or to celebrate weddings.

Cirit is also played among the Turkic populations of Iran, Afghanistan and other central Asian countries.