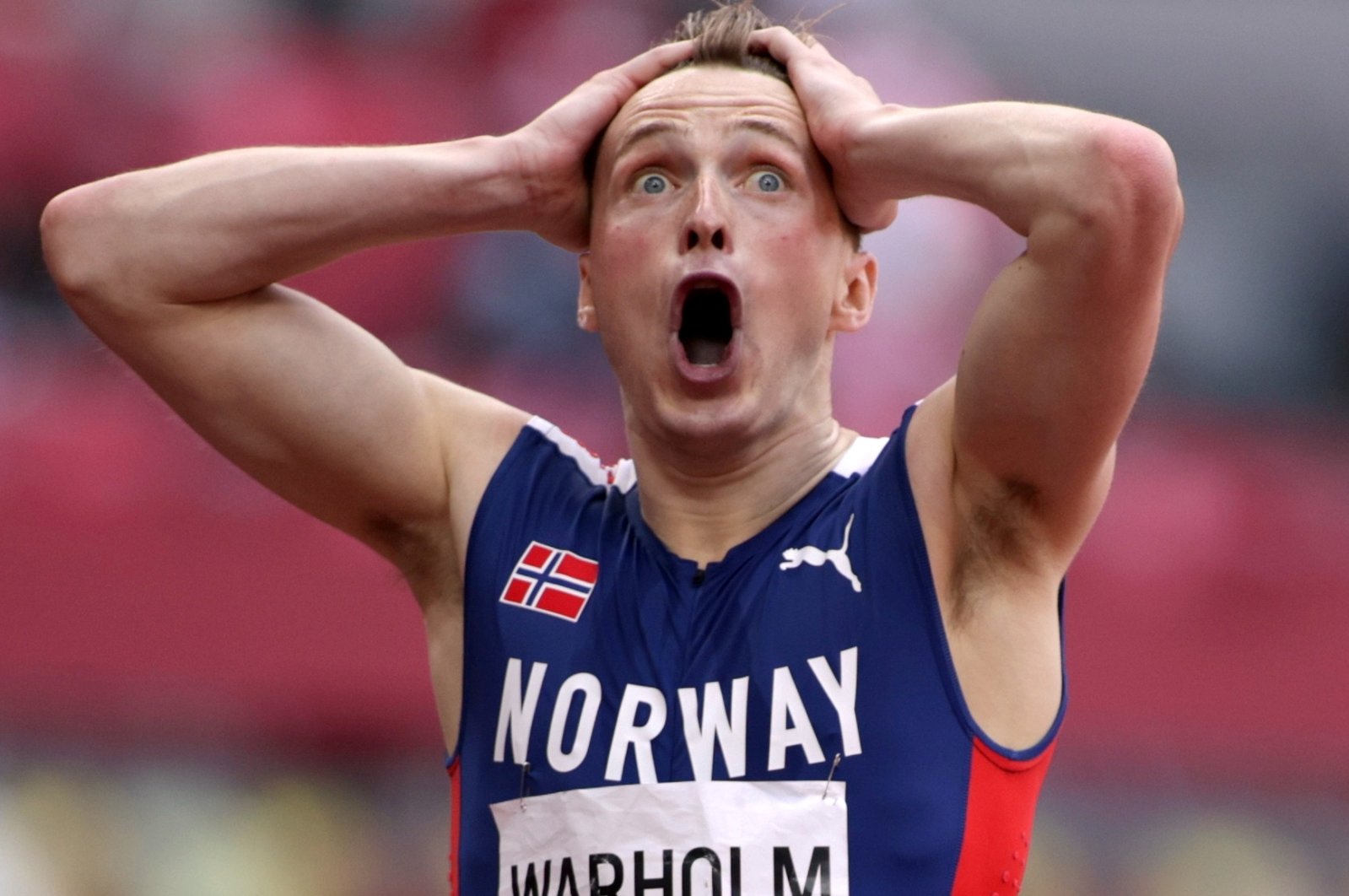 One of the most eagerly anticipated events of the Olympic track and field program, the 400-meter hurdles lived up to its billing as world champion Warholm produced a jaw-dropping performance in the fierce midday sun at Tokyo's Olympic Stadium.

The 25-year-old stormed over the line in an incredible 45.94 seconds, slicing a massive 0.8 seconds off his own world mark of 46.70 set in Oslo last month.

Long-time USA rival Rai Benjamin pushed Warholm hard in the home straight and took silver in another blistering time of 46.17sec, the second-fastest in history.

Warholm roared in apparent disbelief as he spotted his winning time, dropping to his knees and ripping open his running vest.

"I always say that the perfect race doesn't exist, but this is the closest I've come to a perfect race," Warholm said.

The two-time world champion said he decided to set a furious pace from the gun in order to "stress" his rivals.

"After that I just ran for my life," he said. "I would have died for that gold medal today."

It was the dramatic final act of an entertaining morning session on day five of the athletics competition that produced a gold for German long-jumper Mihambo in a classic duel with 2012 gold medallist and four-time world champion Brittney Reese of the United States.

Mihambo was lying in the bronze medal position ahead of her final jump but hammered down the runway to register a season-best jump of 7.00 meters to take the lead.

Mihambo's leap left Reese – who had led the competition with a best jump of 6.97 meters – with one final attempt to win gold.

But the American could only manage 6.84 meters with her last effort, taking silver ahead of Nigeria's Ese Brume, who won bronze with a jump of 6.97 meters.

Mihambo admitted she had found it hard to watch as she waited nervously to see if Reese would snatch gold with the final jump of the competition.

"I tried to have a sneak peek on the display," she said. "I really don't like this position where you cannot do anything about it and you have to watch the girls do what they have to do.

"It was a horrible moment, but at least it was short."

Felix off the mark

Elsewhere Tuesday, U.S. track and field's golden girl Allyson Felix got her fifth Olympic Games off to a smooth start, cruising to victory in her opening 400-meter heat.

The 35-year-old needs one more medal in Tokyo to become the most decorated female track and field athlete in Olympic history, a title she shares with Jamaica's Merlene Ottey with nine medals.

Felix, the only woman in Olympic history with six athletics gold medals, romped home in 50.84 seconds.

"It's nice to get going," Felix said. "It feels like I've been waiting forever. It felt good to get out there and bump it up for the semi."

In the opening round of the men's 200-meter world champion, Noah Lyles eased into the semifinals, winning in 20.18 seconds.

The qualifying rounds of the women's javelin competition featured upsets with Croatia's 2016 gold medallist Sara Kolak crashing out after failing to register a mark from three attempts.

The Czech Republic's Barbora Spotakova was also a surprise early casualty, the 2008 and 2012 gold medallist finishing just outside the qualifying places to miss out on the final.

In Tuesday's evening session of track and field all eyes will be on Jamaica's Elaine Thompson-Herah as she attempts to complete back-to-back Olympic 100meter-200meter triumphs.

Thompson-Herah, the 100-meter and 200-meter champion from the Rio Olympics, has already successfully defended her 100-meter title in Tokyo and victory in the 200-meter final would see her become the first woman in history to win four individual sprint titles.

Other highlights include the final of the women's 800-meter, where 19-year-old U.S. prodigy Athing Mu will attempt to cap a dazzling debut season with a gold.

Mu leads the world rankings this year with a time of 1min 56.07 seconds and impressed in her semifinal win Friday.