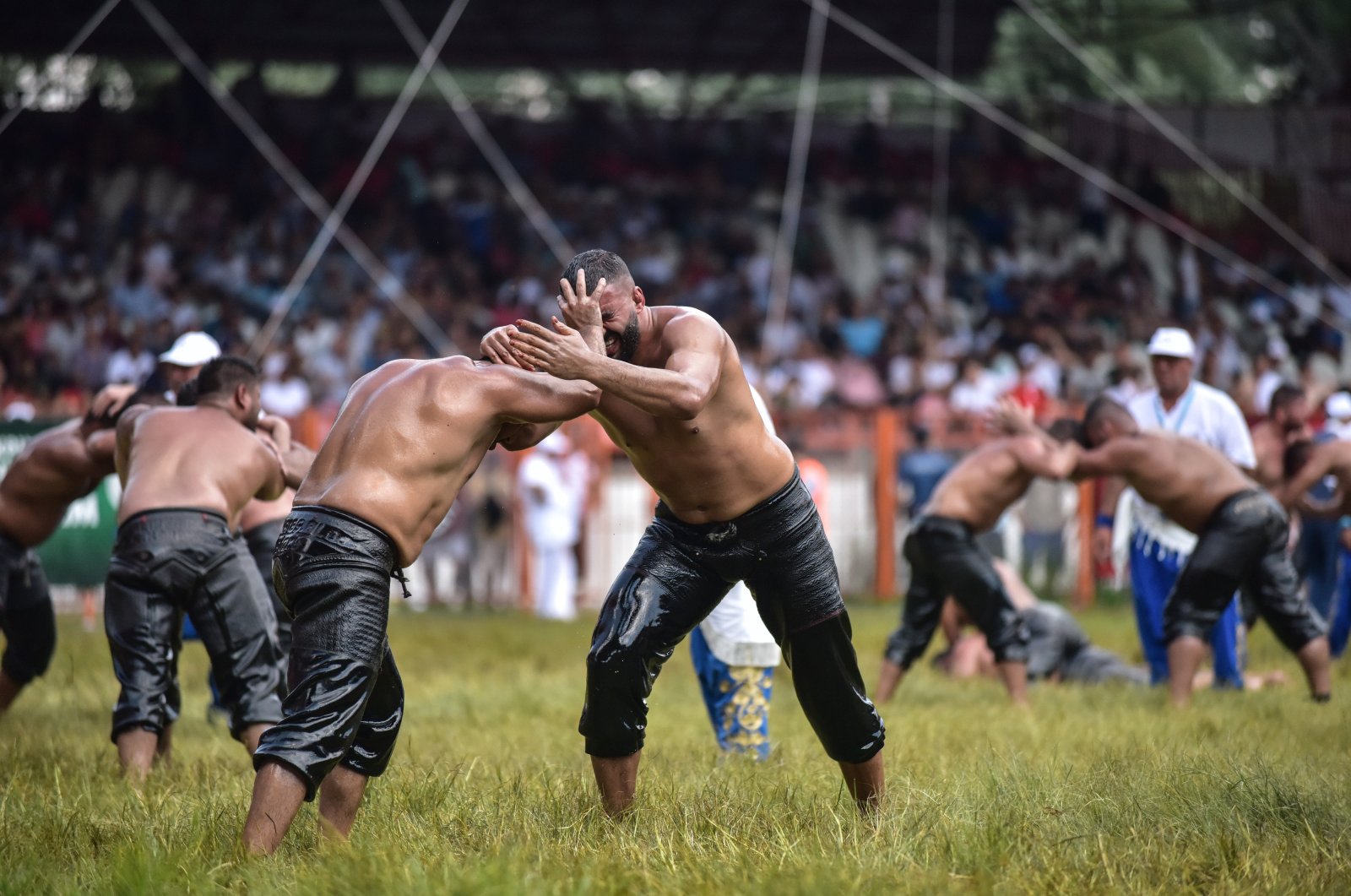 A unique and renowned tournament taking place in northwestern Turkey’s Edirne prides itself for being held uninterruptedly for the last six and a half centuries despite wars, epidemics and even the dissolution of an empire. But now, its fate is in tatters due to the coronavirus pandemic, although athletes and local administrators are hopeful that the event might go ahead in fall by the latest.

Tracing its roots back to the 14th century, the 659th Kırkpınar Oil Wrestling is originally scheduled to take place between June 29 and July 5. Along with the rest of the world, however, Turkey is imposing large-scale measures to curb social integration and mobility to curb the spread of the coronavirus, and a four-day-curfew is currently in effect in the country’s 31 provinces. Many officials, including President Recep Tayyip Erdoğan, voiced hopes that steps to return life to normal can be implemented starting from June, but it is highly unlikely that Kırkpınar will resume as a mass festival in June.

Mayor Recep Gürkan of Edirne said Wednesday that the Kırkpınar tradition should not be suspended, and the uninterrupted continuity of the tournament for six and a half centuries was among the key reasons that Kırkpınar was listed on the UNESCO World Heritage List in 2010. The Edirne Municipality is the key organizer and backer of the tournament.

“The Olympics were suspended. A world war broke out, it was suspended, or it was suspended for other reasons. But Kırkpınar continued in all conditions, all environments – in war, in peace, in wealth, in poverty. For whatever reason, I personally would not want to be the mayor who disrupted a 658-year-old tradition. Nobody would want that,” Gürkan said at an event, adding that they want to go ahead with the tournament if the outbreak ends by that date. He said the open-air event could be postponed to the end of September at the latest, or an indoor solution during the winter could be applied as a last resort to have Kırkpınar’s 659th edition within 2020. The mayor had previously said that a symbolic match without attendees can be organized between two wrestlers.

Meanwhile, wrestlers themselves are trying to keep in shape at home for Kırkpınar, regarded as the most prestigious wrestling event in the country, hoping that it can take place in autumn in its regular form.

Recep Kara, who won the tournaments in 2004, 2007, 2008 and 2016 and earned the title of chief wrestler (başpehlivan), told Anadolu Agency (AA) that he is isolated at home and spends his days training and wrestling with his son Muhammet Emin, who is a basketball player.

Dubbed “the Gentleman of the Meadows,” referring to the Sarayiçi wrestling ground located between two branches of River Tundzha, Kara said: “The 2020 Olympics in Tokyo or the Wimbledon Tennis Tournament that was launched in the 1870s have been postponed. We have a six-and-a-half-century tradition of uninterrupted Kırkpınar (festivals) that was not suspended even during wars. However, we also have a fight with a deadly virus ahead. Wrestling means direct contact."

"I personally think that Kırkpınar should be postponed,” Kara said, adding that he thinks that the tournament can be held in the fall if there is no risk in accordance with the data to be announced by the country’s Coronavirus Science Board.

Mehmet Yeşil Yeşil, the champion of 2009 and 2010, underlined that their training routine is very different than usual since they are maintaining social isolation principles and the wrestling season could not be launched due to the pandemic. “We wish that (Kırkpınar) would be held on time but it seems not likely. But wrestlers should also be given time to train and prepare before the tournament is held,” Yeşil Yeşil said.

Şaban Yılmaz, chief wrestler of 2005, wished for the entire world to get rid of the virus “menace” soon. “We train in tough circumstances and cannot prepare fully or efficiently for Kırkpınar, which is our Olympics. We are trying to keep in shape with elastic ropes or dumbbells. We can’t wear kispet (traditional leather pants), we can’t train with oil. There is not an exact date for Kırkpınar. I think it must be set clearly.”

Another deep-rooted tradition in Edirne facing cancellations due to the pandemic is the city’s famed Roma festival of Kakava, which is believed to date back some 1,400 years and is held at the beginning of May. Mayor Gürkan said a symbolic Kakava celebration will be held, with the attendance of the provincial governor and the local Roma community chief, in which a ceremonial fire will be lit.


Sharing the former palace compound in this historic Ottoman capital along with the Kırkpınar tournament, Kakava Festival draws tens of thousands of visitors throughout Turkey as well as the Balkans to Edirne each year for two days of entertainment and celebration of spring. For the Roma community, however, the festival is merged with the ancient tradition that takes its roots from a legend called "Baba Fingo." According to the legend, Baba Fingo, the leader of the Romas, who were being oppressed by the pharaoh in Egypt, led his people to the Red Sea to hide from Egyptian soldiers and never returned. The legend says he will come to the surface again from a body of water, resurrected, on the morning of May 6.