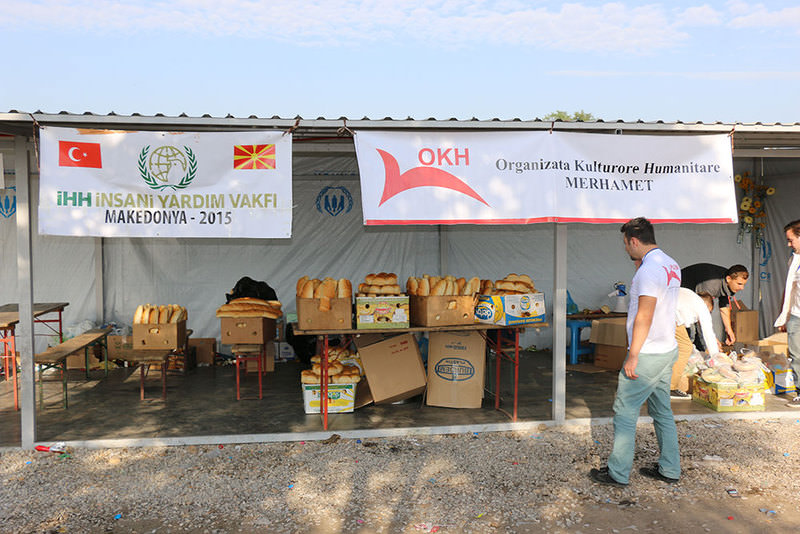 by Anadolu Agency Sep 21, 2015 12:00 am
A Turkish humanitarian agency has been delivering aid to refugees trying to reach Western Europe in Macedonia's northern town of Kumanovo, a representative of the Istanbul-based relief foundation said.

Speaking to Anadolu Agency, a member of the Humanitarian Relief Foundation (IHH), Burak Berberoğlu said that the agency had been delivering aid during the Muslim holy month of Ramadan in the region.

The agency returned around 10 days ago, around the time when a photo of a drowned Syrian toddler who washed up on a beach in Turkey dominated international media.

Stating that around 500 food packages have been distributed daily to the refugees, Berberoğlu said: "There are fruit juices, waters, sandwiches and canned goods in the food packages."

The IHH, one of the biggest aid foundations in Turkey with almost 100,000 volunteers, is working in the region along with the UN refugee agency, the UNHCR, as well as the Red Cross.

Berberoğlu added that the agency planned to be in the region during winter to help refugees.

The U.N. said last month that every day around 3,000 refugees, most fleeing the civil war in Syria, are expected in Macedonia in the coming months.

With around 2 million refugees from Syria, Turkey is home to the world's largest such population, according to the U.N.

The refugees arrive in Macedonia via Greece to then head to Western European countries through Serbia, Croatia and Hungary.
In the first five months of 2015, over 42,000 people arrived by sea to Greece, most of them refugees, according to the United Nations Refugee Agency (UNHCR).

The UNHCR also says more than 300,000 people have risked their lives to cross the Mediterranean Sea so far this year, with around 2,500 refugees and asylum seekers have died or gone missing trying to reach Europe.