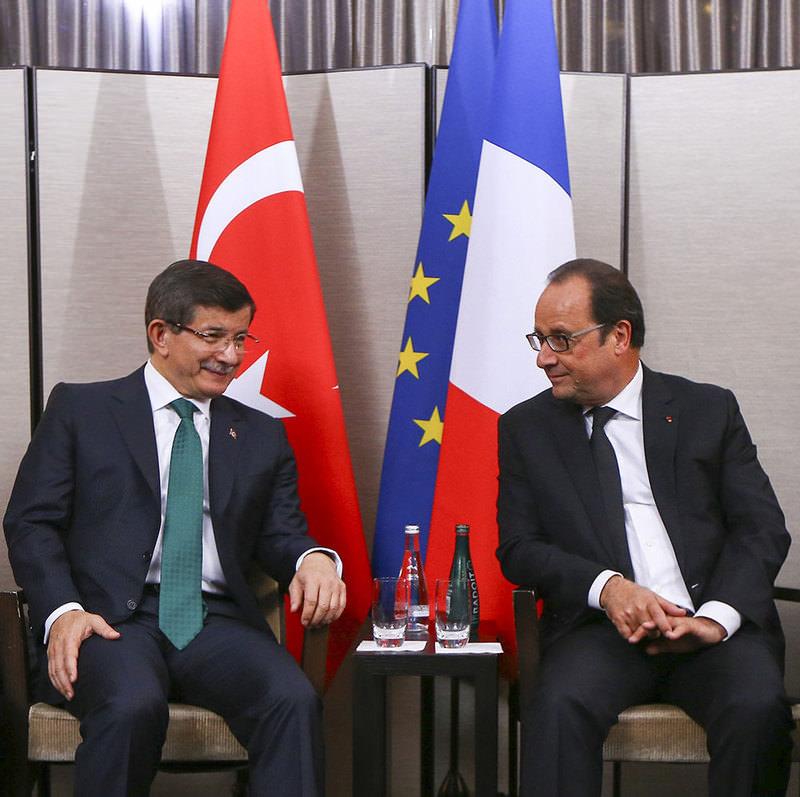 by Daily Sabah with Reuters Sep 29, 2015 12:00 am
France will discuss with its partners in the coming days a proposal by Turkey and members of the Syrian opposition for a no-fly zone in northern Syria, French President François Hollande said on Monday.

Struggling with more than 1.8 million Syrian refugees, Turkey has long campaigned for a "no-fly zone" in northern Syria to keep ISIS and Kurdish militants away from its border and help stem the tide of displaced civilians trying to cross.

France has also previously pushed the idea that has gained some traction in Europe with hundreds of thousands of Syrian and Iraqi refugees fleeing the region to Europe with little hope of seeing an end to the crises.

French Foreign Minister Laurent Fabius "in the coming days will look at what the demarcation would be, how this zone could be secured and what our partners think," Hollande told reporters on the sidelines of the annual United Nations General Assembly. "Not only would it protect those living in these zones, but, and this is the idea behind it, refugees could return to this zone," Hollande said.

Hollande said such a proposal could eventually be rubber-stamped with a U.N. Security Council resolution that "would give international legitimacy to what's happening in this zone."

Security Council diplomats have said that Russia, which backs Syrian President Bashar Assad in the civil war, would not support any such resolution.

Turkey had proposed the establishment of a safe zone that would both help Syrians fleeing their homes as well as refugee-taking countries who will be relieved of the heavy burden refugees place on host countries. The safe zone, which would be accompanied by a no-fly zone jointly protected by several countries, has not come to fruition yet as the international community remains reluctant to establish such a zone.

"Turkey suggests forming a safe zone for refugees," a senior Turkish official said. "Otherwise a new wave of refugees will probably become inevitable. This issue has to be resolved within Syria," the official said, also calling on partners the U.N., European Union and the United States "to focus on the root cause."

Turkey and the United States said in July they were working on plans to provide air cover for Syrian rebels and jointly sweep ISIS fighters from a strip of land along the Turkish border, bolstering the NATO member's security and possibly providing a safe haven for civilians.

The size and scope of a zone along the border was under discussion, U.S. officials have said, but Washington ruled out jointly imposing a formal no-fly zone. It said the plan with Turkey was not aimed at creating a "safe zone" for refugees.

"The [Turkish] idea of a no-fly zone in the north of Syria would aim to liberate this part of Syrian territory through a large operation and it would be for the moderate Syrian opposition and the Turks to carry it out," a senior French official said after Hollande met Prime Minister Ahmet Davutoğlu on Sunday.