The world needs to provide Syrian refugees safety in their homeland with a ‘safe zone’: PM Davutoğlu 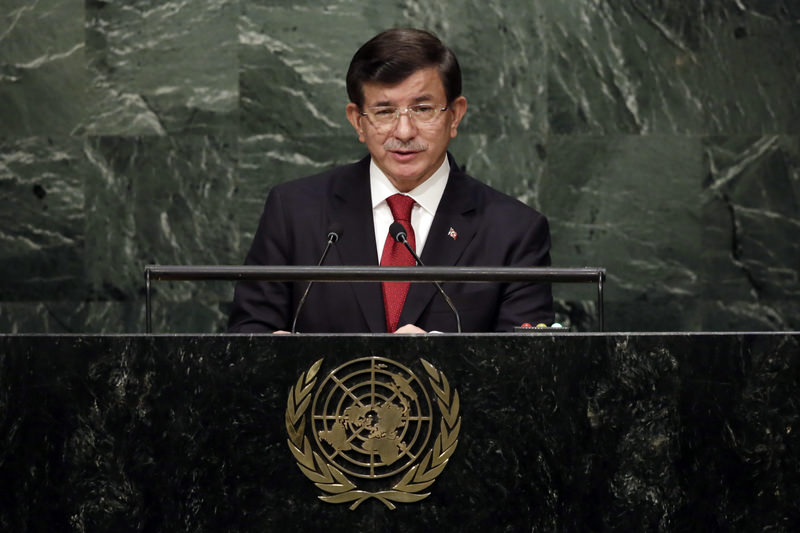 by daily sabah Sep 30, 2015 12:00 am
Prime Minister Ahmet Davutoğlu called on the international community to form a "safe zone" in Syria to protect civilians from the Assad regime's barrel bombs and ground assaults by ISIS and other terrorist organizations in his UN General Assembly speech on Wednesday.

Davutoğlu said that the UN has failed in saving people from 'suffering pains of hell' in many regional conflicts, such as Bosnia, Rwanda and what has been taking place in Syria for over the past four years, adding that the international community must act swiftly to provide Syrian refugees' safety in their homeland by imposing a "safe zone".

"The tragedy in Syria will not end before the people of Syria have a legitimate government that truly represents their will and enjoys their full consent and anyone thinking of any solution to the Syrian conflict must think of a Syria without Assad," Davutoğlu said.

The Turkish premier also stated that Turkey will continue to keep its doors open to refugees. "Turkey has assumed more than a fair share of the burden. Providing protection to more than two million Syrians and 200 thousand Iraqis. So far we have invested almost eight billion dollars –with international contributions remaining at a mere 417 million dollars."

Turkey currently hosts more refugees than any other nation, according to the UN. With $3.5 billion of official development aid and $1.6 billion of overseas humanitarian assistance, Turkey is the third largest humanitarian donor in the world.

Davutoğlu said that the Syrian crisis enabled the region to become a magnet for terrorist organizations which also affects Turkey deeply, saying "Turkey is combatting terrorism of all kinds, including ISIS and the PKK. Our counter-terrorism efforts and our contribution to the international cooperation s well known by our partners."
Last Update: Sep 30, 2015 10:52 pm
RELATED TOPICS