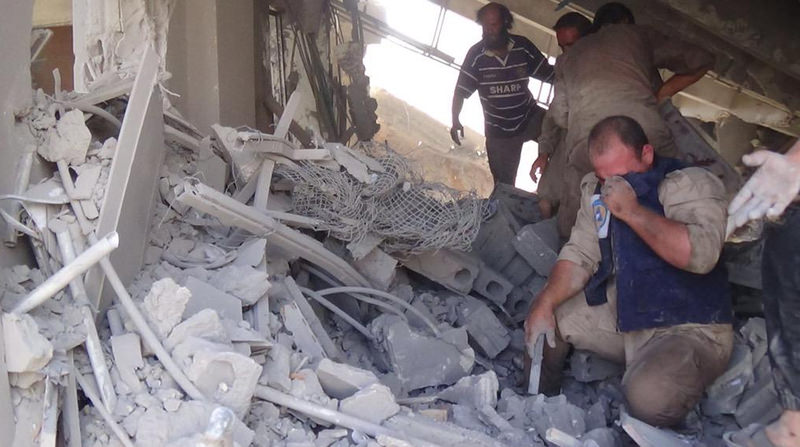 This image taken in Wednesday, Sept. 30, 2015 shows a volunteer search and rescue group, in the aftermath of an airstrike in Talbiseh, Syria. (AP Photo)
by Anadolu Agency
Oct 01, 2015 12:00 am
Turkey on Thursday expressed concern about reports that areas hit by Russian airstrikes in Syria were not ISIS positions and that civilian casualties occurred during the air raid.

"We are very much concerned at the reports that yesterday's air operation by Russia was not targeting ISIS but some opposition positions and civilian casualties have also occurred during these operations", Turkish Foreign Minister Feridun Sinirlioğlu told a news conference at the United Nations following a meeting of the Group of Friends of Mediation-a group that promotes meditation to settle disputes among nations.

"If these reports are correct, of course it is very worrisome, it might lead to further escalation", he said. "This is the last thing that we need in this very tragic and chaotic situation in Syria. This will add up to the problems in Syria, not will be helpful for finding solution to this now long overdue suffering of the Syrian people."

According to the Syrian National Coalition, the main Western-backed opposition group, the Russian airstrikes resulted in the deaths of 36 civilians, including five children. The areas targeted by Russia were free of any ISIS or al-Qaeda presence, the group's chief, Khaled Khoja, said in New York on Wednesday.

Syria's devastating civil war, now in its fifth year, has claimed more than 250,000 lives, according to UN figures, and made the country the world's single-largest source of refugees and displaced people.