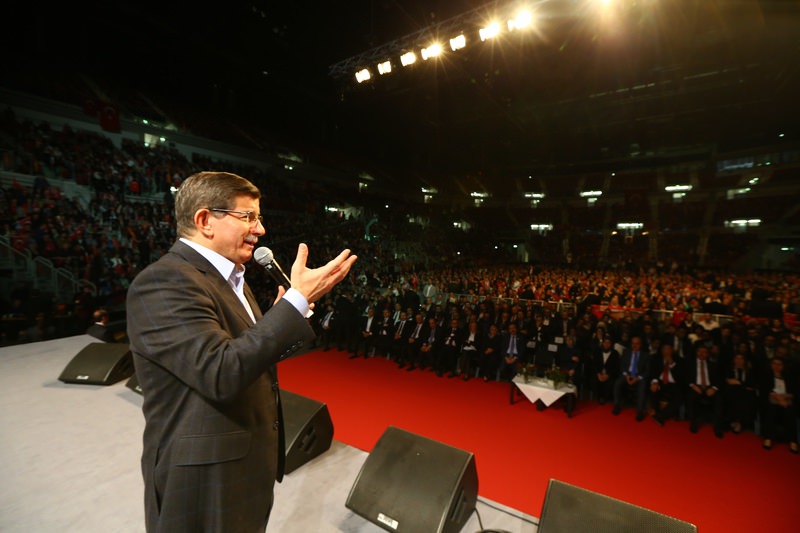 by Anadolu Agency
Oct 03, 2015 12:00 am
Turkish Prime Minister Ahmet Davutoğlu called on Turkish immigrants living in Germany to do everything to help asylum seekers who seek shelter in the country, amid signs of growing support for anti-immigrant and far-right movements in Germany.

During his address to Turkish expatriates, he said "Let us give those racists groups in Europe a lesson in humanity,"

"I am proud of my people. We have seen no single racist reaction in Turkey against our 2 million brothers and sisters who came from Syria," he added.

"Both Europe and Turkey are facing a test in these days," Davutoğlu said referring to the Syrian refugee crisis, during a rally in the western German city of Dusseldorf, where he addressed around 8,000 Turkish immigrants.

He congratulated Merkel for her leadership in addressing the growing refugee crisis in Europe, trying to convince other European states to show more solidarity.

"Germany has taken a courageous decision and opened its doors to refugees. I have talked this with Ms. Merkel in New York. We would like to congratulate this decision," he said.

He criticized several European leaders, including Hungarian Prime Minister Orban, who opposed accepting refugees, describing the influx of refugees as a threat to Europe's "Christian roots".

Turkey is currently hosting the world's largest refugee population, including 1.9 million Syrians, and has spent around $8 billion over the last five years.

Germany, which has become the most popular destination for refugees coming to Europe, expects a record 800,000 asylum applications this year, four times the last year's total.

Davutoğlu was invited to Dusseldorf by the Union of European Turkish Democrats (UETD), a conservative and influential organization of ethnic Turks in the country, ahead of November 1 parliamentary election in Turkey.

Davutoğlu also pledged to solve problems of Turkish immigrants living abroad, and called on them to have their say in the upcoming election by increasing their voter turnout.

Germany has the largest Turkish diaspora abroad. Among the 3 million ethnic Turks living in Germany, around 1.4 million of them are Turkish citizens who are eligible to vote in the November 1 election.