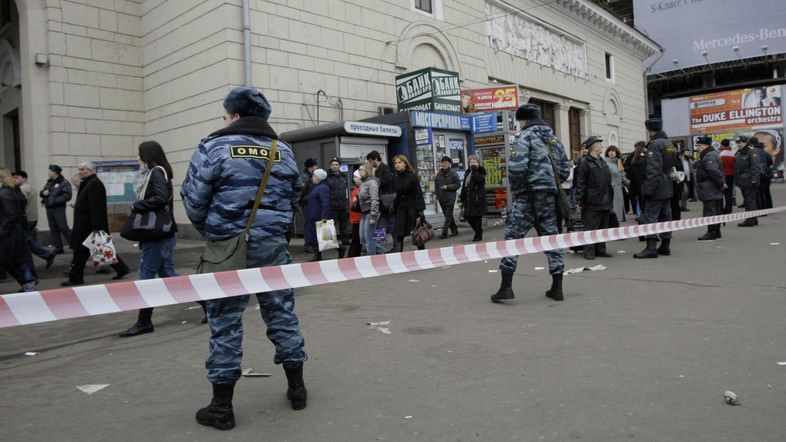 More than 120 people were evacuated from the building and the explosives were defused. (AP Photo)
by Compiled from Wire Services
Oct 12, 2015 12:00 am
A group of Russians arrested with a bomb were planning to attack Moscow's public transport system and included people trained by ISIS in Syria, Russian security services said on Monday.

The National Anti-Terrorism Committee said on Sunday it had detained around 10 people caught with bomb-making equipment and an improvised explosive device.

More than 120 people were evacuated from the building and the explosives were defused.

"Some of these people underwent training in ISIS camps in Syria," Interfax news agency quoted the Federal Security Service (FSB) as saying. "Questioning of two of the detainees revealed that they were planning to carry out a terrorist attack on public transport in Moscow."

Russia has been stepping up security, worried about the threat from extremists especially from the restive northern Caucasus returning home from the Middle East or Afghanistan, perhaps seeking revenge for Moscow's military intervention against Syrian rebels.

President Vladimir Putin has said more than 2,000 militants from the former Soviet Union are fighting in Syria.

The FSB said the would-be bombers had returned to Russia long before Moscow began its campaign of air strikes in support of Syrian President Bashar al-Assad at the end of September.

But their arrests will be seen by the Kremlin as supporting its argument that the intervention is necessary to keep home-grown extremists at bay.

"Instead of waiting for them to return home, we should help President al-Assad fight them there," Putin told U.S. television before meeting U.S. President Barack Obama in September.

Some Russians have argued, however, that Putin's actions could make Russia a target of revenge attacks.

"The threat of terrorist activity has risen sharply in connection with the beginning of a mass bombing campaign in Syria," said Gennady Gudkov, an opposition activist and former deputy head of the Russian Parliamentary Security Committee.

"Moreover, it has increased specifically in Moscow," he told the radio station Echo Moskvy.

The Russian capital has a grim history of militant attacks going back more than a decade. Most recently, two suicide bombers killed 40 people on the Moscow metro in 2010, and in 2011, more than 30 people were killed in a suicide bombing at Moscow's Domodedovo airport.

The Kremlin said on Monday that the heads of the former Soviet states holding a summit in Kazakhstan on Friday would endorse the creation of a joint task force to defend their external borders.