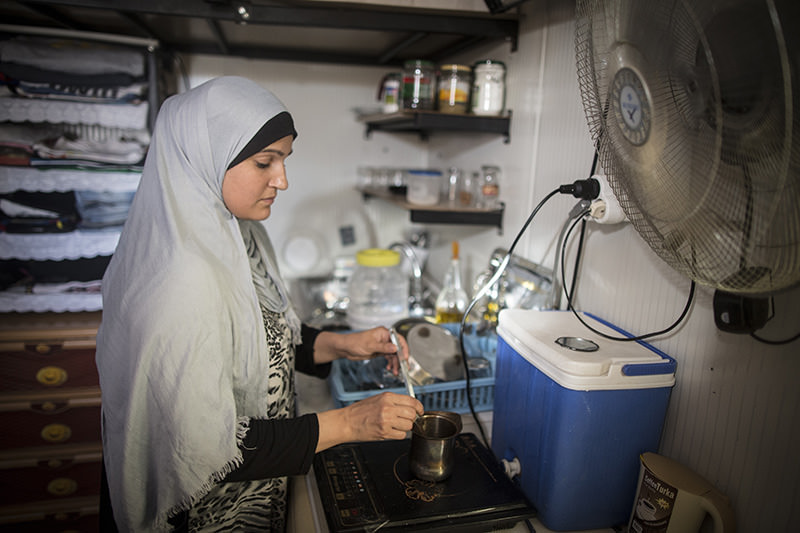 Syrian refugee woman who fled Syria, makes coffee at her prefabricated house at a tent city in the Harran District of u015eanlu0131urfa, Turkey on September 24, 2015 (AA photo).
by Daily Sabah with Reuters
Oct 15, 2015 12:00 am
The World Bank plans to talk to its member countries about compensating Syria's neighbors for the substantial fiscal cost of hosting refugees for long periods, a World Bank official said in Geneva on Thursday.

"It's actually quite significant for countries like Jordan, for Lebanon and for Turkey, and some estimates put that at about 1.1-1.4 percent of GDP," Colin Bruce, senior adviser to the World Bank president, told a conference.

"We recognize that for many of these countries there's a cost associated with hosting with refugees and they need to be compensated," he said. "We are quite prepared to enter into that dialogue with our shareholders as to how we support the compensation of countries, and in particular the middle-income countries that do not have access to concessional resources, and that's the conversation that is taking place."

Humanitarian officials have previously said that the World Bank's rules forbid it from making grants to middle-income countries such as Lebanon, but that governments are unwilling to borrow from the bank to cover the costs of refugees, leaving a huge funding gap for countries hosting 4 million Syrians. Bruce was speaking at a preparatory meeting for the 2016 World Humanitarian Summit, where the United Nations hopes to reform the way that emergencies such as the Syrian refugee crisis are tackled and funded, after a spate of global crises displaced 60 million people and overwhelmed U.N. aid budgets.

Bruce said that the bank was also mindful that refugees and migrants could have a positive economic impact over the longer term, and it wanted to advise governments about policies that would generate a dividend from hosting displaced people.

Earlier, several popular start-ups and tech giants such as Apple and Google launched campaigns to provide aid to Syrians fleeing the country's civil war. Grocery delivery service Instacart, crowdfunding platform Kickstarter and room-sharing site Airbnb all announced different campaigns to help with the mounting refugee crisis in the Middle East and Europe, with many fleeing the destabilization and violence of the four-year-old civil war in Syria.

Twitter also announced that it would debut its donation product ahead of schedule, which allows users to give money by simply clicking a button. Facebook also announced a plan late last month to bring free Internet access to refugee camps and Google reached its $11 million goal in just two-and-a-half days. The company said it would hand the money to four international organizations: Doctors without Borders, the International Rescue Committee, Save the Children and the United Nations High Commission for Refugees.
Last Update: Oct 15, 2015 3:47 pm