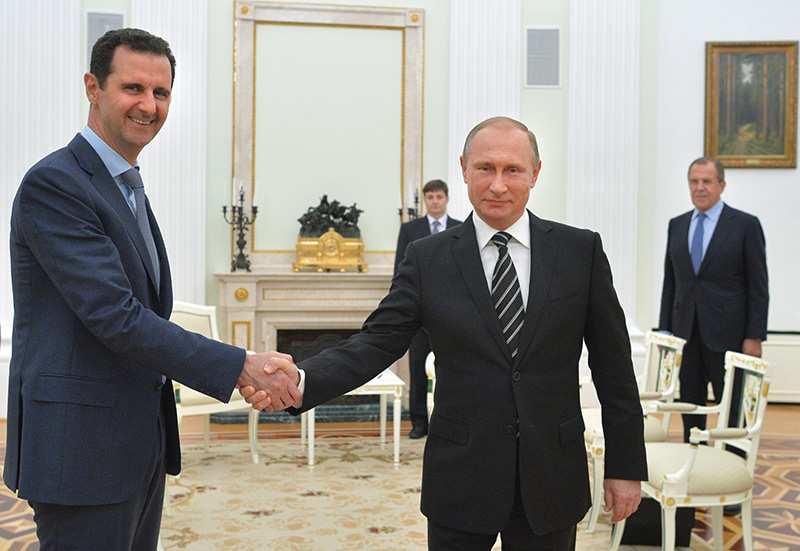 Russian President Vladimir Putin, center, shakes hand with Syrian President Bashar Assad as Russian FM Sergey Lavrov, right, looks on in the Kremlin (AP photo)
by Anadolu Agency Nov 03, 2015 12:00 am
A group of Russian MPs have put forward a plan to restore the economy of the Assad regime in Syria.

The proposal is for the creation of a bilateral Russia-Syria reconstruction agency which would spearhead and fund projects to rebuild the area of Syria controlled by the regime headed by president Bashar al-Assad.

Russian Duma member Alexander Yushchenko, who recently took part in a parliamentary delegation that visited Damascus, told the press in a conference at TASS headquarters on Oct. 28: "Assad supported our idea of creating a joint body responsible for coordinating Syria's reconstruction. He speculated that such a body might be created at the government level."

The Russian delegation discussed the project with Assad, Syrian Prime Minister Wael Al-Halqi and with other government officials.

Russian MP Sergey Gavrilov, who also was part of the delegation, said at the same press conference that he expected the two countries to create such an agency at the government level.

Gavrilov has been working with a group of his fellow MPs on a plan for the agency. The first step would be to set up an intergovernmental commission which would set priorities for reconstruction.

For Gavrilov, the first priority would be rebuilding the oil and gas industry. "A number of Russian companies have shown interest in such projects," he said.

Other sectors under discussion for the project included phosphates processing, energy, transportation, agriculture and perhaps the increase of exports to Russia, Gavrilov said.

"Russian companies would have an exclusive opportunity to work on these projects," Gavrilov said.

According to Gavrilov, the Assad government is ready to discuss specific projects; all that is needed is to set up the framework for the agency.
Gavrilov noted the potential of the region's economy, which he said had been undermined by the long conflict.

"Let me remind you, the economy of Syria has almost halved-to a GDP of $56 billion. Unemployment is at 40 percent, and inflation is at 400 percent," Gavrilov said. He blamed "foreign aggression" for the collapse of the region's economy.

"At the same time, the main economic sectors in Syria continue to be under the control of the government, there is a highly qualified population, and there is the desire of many refugees to return home," he added.

The MPs proposed an "institutional approach" to be established for the project, which would include project financing, long-term fundraising and the issuing of bonds.
Last Update: Nov 03, 2015 2:36 pm
RELATED TOPICS