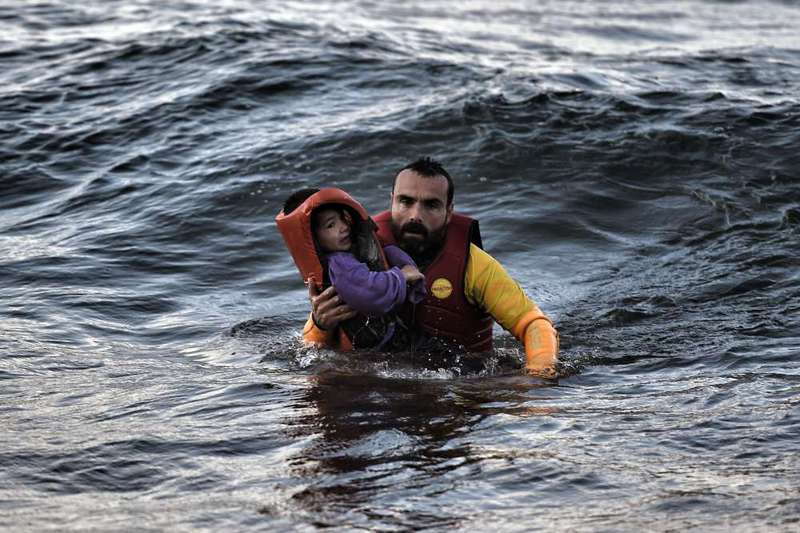 As the EU struggles to cope with the refugee crisis, more than 218,000 refugees arrived in October, roughly the same as the entirety of 2014. Amnesty criticized the EU for failing to prevent refugee deaths in on the Aegean Sea

Amnesty International criticized Europe's failure to stop migrant deaths in the Aegean Sea as the death toll from ramshackle boats sinking off Greece rises daily. "Inertia and the lack of political will cost lives in the Aegean," the international rights watchdog's Greek branch said in a statement on Monday.

"How many drowned refugees and how many dead children are required to activate European 'values?' " asked Amnesty's Greek branch chief Yiorgos Kosmopoulos.

The group said over 450 refugees and migrants had died or gone missing in successive Aegean Sea sinkings in the first 10 months of the year. This included 86 people including many children who drowned or went missing in seven accidents near the shores of Lesbos, Samos, Kalymnos and Rhodes between Oct. 28 and 30. The Greek coastguard on Monday said the death toll from the Lesbos accident had risen to 43, including 19 children and a baby.

Amnesty noted that a 12.5-kilometre fence erected on Greece's border with Turkey in 2012 had exacerbated the problem. "The fence... has forced refugees and migrants to choose the more dangerous sea route from Turkey to Greece," it said. However, the Greek minister responsible for migration said that although the leftist government was ideologically opposed to the fence, tearing it down was not an option for now. "At the present time, the conditions to obtain a positive result from tearing down the fence do not exist," Yiannis Mouzalas told Efimerida ton Syntakton daily. "In contrast, this could exacerbate the problem both for the refugees and for Greece," he said, noting that before the fence was built, many migrants had died attempting to cross the land border with Turkey. Many of the migrants had in the past fallen victim to sub-zero temperatures or to border landmines.

Under the terms of an EU agreement some 160,000 migrants are to be shared between member states, including 66,000 from Greece. Over 200,000 migrants arrived in Greece in October alone, according to the U.N. refugee agency, though many have moved on to other EU states.

Meanwhile, the United Nations refugee agency UNHCR announced more than 218,000 refugees arrived in Europe by sea in October, up from 172,843 in September. "That makes it the highest total for any month to date and roughly the same as the entire total for 2014," said Adrian Edwards, a spokesman for UNHCR on Monday, pointing out that "arrivals in October paralleled the entire 2014."

In October, 218,394 people made the perilous crossing – all but 8,000 of them landing in Greece – compared to 216,054 Mediterranean arrivals during all of last year, UN figures show. The soaring numbers of arrivals last month brought to over 744,000 the number of people who have made the journey so far this year.

The October figures show that despite the increasingly harrowing conditions at the onset of winter, refugees from Syria and other trouble spots continue to pile into boats heading west, fearing that Europe is about to close its borders. Among the more than 600,000 migrants and refugees who have crossed to Greece since the beginning of the year, 94 percent come from the world's top 10 refugee-producing countries. The ballooning number of crossings has had dire consequences, with the numbers of deaths piling up by the day. Some 3,440 people have died or gone missing trying to cross the Mediterranean to Europe so far this year, according to UNHCR numbers last week.

The turmoil in the Middle East and the five-year war in Syria have led many people to flee the conflict in an attempt to seek security and shelter in a more prosperous and peaceful country, such as one in Europe. However, Europe has been slammed for lacking a collaborative response to the crisis. The U.N. refugee agency encouraged European countries to do more to share the burden of the international community in the refugee crisis.
RELATED TOPICS