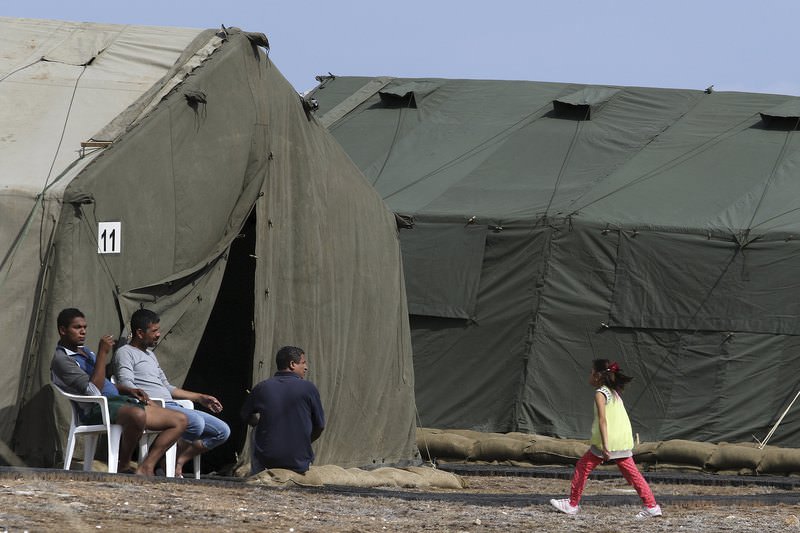 Riots erupted at the British military base in Southern Cyprus as the refugees fleeing the conflicts most of whom are from Syria pleaded to be freed from the base where they are now being held, shouting “We’re people,not animals!”

114 refugees from the Middle East, most of them from Syria, held in the British Base in Cyprus have rioted and set tents ablaze, British Forces Cyprus spokesperson Sean Tully confirmed on Tuesday.

The official responded to videos posted on the website of British daily Guardian, which showed migrants protesting and complaining about the double standard of the administration, and "being treated like animals."

According to local sources, two of the refugees who set tents on fire committed suicide. The refugees being kept in the base after coming ashore last month said that the base is recognized as the UK territory as they demanded their transfer to Britain.

Nevertheless, the British officials rejected the demand as they said their bases on Cyprus are not a "back door to the UK."
The 28 children, 19 women and 67 men landed at the Akrotiri Royal Air Force (RAF) base in two fishing boats on October 21. They were moved to the Dhekelia garrison last week.

Saying that mostly Syrians, Palestinians and Lebanese were frustrated because of being unsure about their future, Tully added that a "handful" have asked for asylum in the Greek Administration of Southern Cyprus.

"Those who don't claim asylum may be repatriated; the SBA (Sovereign Base Area) will be responsible for this," he added.
The British defense ministry has said the migrants should be handed over to Southern Cyprus in line with a 2003 agreement, which suggest Cyprus administration to "take responsibility in circumstances like this".

Before that deal was signed, migrants landing on the bases had been left in legal limbo.

In 1998, a ramshackle fishing boat crammed with 75 migrants landed at Akrotiri, which lies in one of two base areas over which Britain retained sovereignty when Southern Cyprus won independence in 1960.

Seventeen years on, some of them are still living on Dhekelia base, after repeated appeals for asylum in Britain were turned down.

Recent figures show that despite the increasingly harrowing conditions at the onset of winter, refugees from Syria and other trouble spots continue to pile into boats heading west, fearing that Europe is about to close its borders. Among the more than 600,000 migrants and refugees who have crossed to Greece since the beginning of the year, 94 percent come from the world's top 10 refugee-producing countries. The ballooning number of crossings has had dire consequences, with the numbers of deaths piling up by the day. Some 3,440 people have died or gone missing trying to cross the Mediterranean to Europe so far this year, according to UNHCR numbers last week.

The turmoil in the Middle East and the five-year war in Syria have led many people to flee the conflict in an attempt to seek security and shelter in a more prosperous and peaceful country, such as one in Europe. However, Europe has been slammed for lacking a collaborative response to the growing problem. The U.N. refugee agency encouraged European countries to do more to share the burden of the international community in the refugee crisis.
Last Update: Nov 04, 2015 9:19 pm