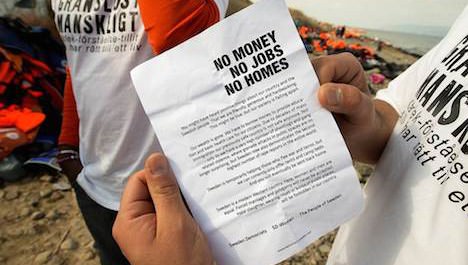 | Google images photo from Swedish news site 'The Local'
by Daily Sabah with AP Nov 09, 2015 12:00 am
Hijabs, halal meat will be banned and all refugees arriving in Sweden will live in tents, said the flyers handed out in a refugee camp in Greek island Lesbos, as part of the Swedish government's latest strategy to deter refugees from seeking asylum in the Scandinavian country.

According to a piece by Sweden's English news source "The Local", dated November 8, 2015, the anti-refugee flyers were handed out by a group who call themselves "Sweden Democrats, SD-Women and The People of Sweden".

Headlining with "No money, no jobs, no homes", the flyers stated that Sweden has banned hijabs and halal meat, and is forcing refugees to live in tents.

The flyers also claimed that the massive influx of refugees has caused "grenade attacks in public spaces" and "a very high number of shootings and gang related violence", as reported by the Local.

These flyers which are seen as a part of a campaign to halt the huge influx of asylum-seekers arriving in Sweden, were on Monday confirmed to be a campaign started by the country's right-wing Sweden Democrats party.

Sweden Democrats party spokesman Joakim Wallerstein confirmed to the national TT news agency that the party was behind the flyers campaign, but he declined to comment on specific claims in the flyers.

The party has been a strong critic of the Social Democratic-led government's immigration policies, saying the Scandinavian country was facing collapse.

Previously, on September 8, Danish adverts in four Lebanese newspapers had come under heavy criticism for blatantly trying to deter refugees from travelling to the Nordic country.

The adverts in English and Arabic had outlined the EU member state's anti-refugee policies, including tighter regulations on social benefits and a temporary residence permit that does not allow refugees to bring their families to the country.
Last Update: Nov 09, 2015 6:49 pm
RELATED TOPICS