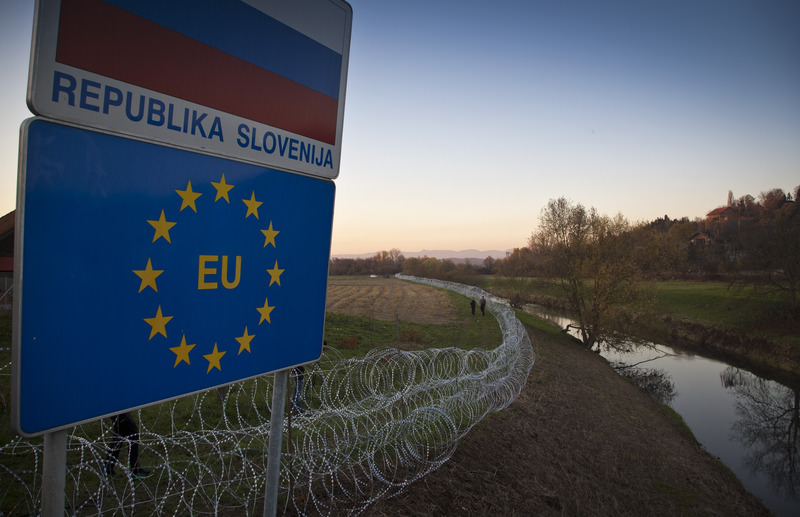 Razor razor-wire fence is erected on the Croatian border, in Rigonce, Slovenia, Wednesday, Nov. 11, 2015. (AP Photo)
by French Press Agency - AFP
Nov 11, 2015 12:00 am
Slovenia began erecting razor wire along the border with fellow EU member Croatia on Wednesday in a move the government says will help it better manage a record influx of refugees.

Slovenia last month suddenly found itself on the Balkans route taken by thousands of refugees heading to northern Europe after Hungary sealed its borders with Croatia and Serbia.

More than 180,000 passing have passed through the small EU member state of two million people since mid-October, all but a handful heading for Austria and beyond.

"We have started erecting technical obstacles on the southern border in two areas," Interior Ministry spokesman Bostjan Sefic said at a news conference in Ljubljana.

He said the barriers near the towns of Brezice and Razkrizje would initially remain in place for six months.

In total, Ljubljana plans to fence off 80 kilometres (50 miles) of its 670-kilometre frontier with Croatia, Austria's chancellery said Wednesday after a meeting with Slovenian Foreign Minister Karl Erjavec in Vienna.

An AFP photographer near the Gibina border-crossing point in north-eastern Slovenia saw soldiers erecting rolls of razor wire to about shoulder-height across fields at the rate of around 100 metres (yards) per hour.

Troops were also installing a razor-wire barrier on the banks of a river near Obrezje in southern Slovenia, just across the border from Zagreb.

The mayor of nearby Brezice, Ivan Molan, said the measures were necessary to help "channel refugees towards points where they can cross the border in a controlled manner".

Prime Minister Miro Cerar said Tuesday that Ljubljana would build "obstacles" along parts of its frontier with Croatia, an outer border of Europe's passport-free Schengen zone.

He insisted they were not closing the border and said the measures were aimed at avoiding a "humanitarian disaster" caused by an expected sharp rise in refugee numbers this week following a recent dip.

Cerar also said that Austria -- the next country on the efugee trail north -- was planning to restrict the daily number of new arrivals to 6,000, creating a backlog in Slovenia.

But Vienna, which expects a record 95,000 asylum claims this year, has so far not announced that it will limit the number of refugee entries.

However, its squabbling coalition government is discussing similar measures along the border with Slovenia, with a decision expected on Friday.

Slovenia's actions came as European leaders met African counterparts in Malta to discuss the refugee crisis, which has driven a wedge between member states and boosted populist parties.